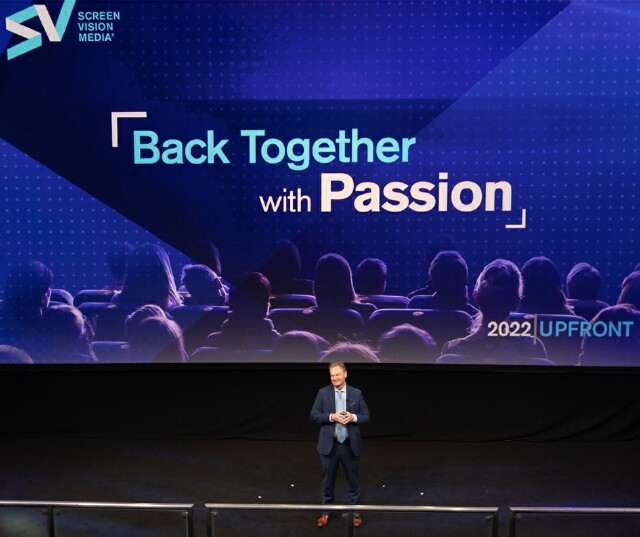 In a masterstroke worthy of a two-thumbs-up acknowledgment from the late, great film critics Gene Siskel and Roger Ebert, the second balcony of New York City's historic Hammerstein Ballroom was open for attendees to watch Screenvision Media's Upfront presentation Tuesday night. The cinema advertising organization, whose pre-feature commercials and Front + Center pre-show plays in more than 2,400 theaters nationwide, conducted its showcase on a stage with a wide movie screen placed high above Hammerstein's orchestra floor.

The Big Message: Consumers are once again in major theater-going mode, now that the coronavirus situation is transitioning from pandemic to endemic. "Movies are back in theaters and audiences are back in their seats," declared Christine Martino (pictured below), Screenvision Media's Chief Revenue Officer. That makes cinema advertising more attractive than ever as a mainstream item in overall campaign budgets. At the same time, launching new initiatives from a smart TV-distributed channel to ongoing relationships with sports arenas and music festivals will expand consumer touchpoints and brand allegiance for specific campaigns. 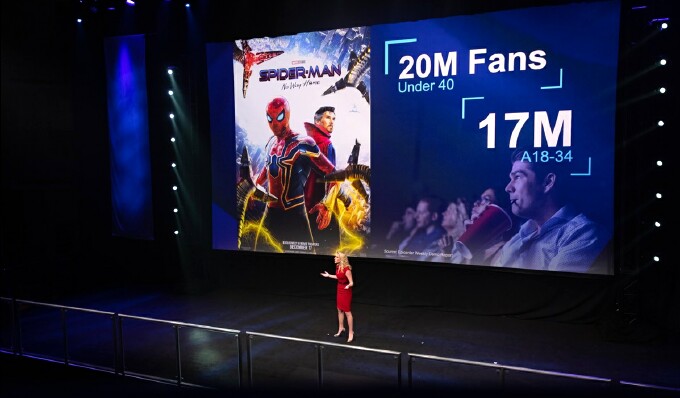 Host: Christine Martino, joined by Screenvision Chief Executive Officer John Partilla (pictured at top). By themselves or together, they are engaging and passionate ambassadors for both movie theater owners and moviemakers.

What Worked: Backing up their big message throughout the presentation with timely stats on movie attendance, box-office performance of recent flicks [including the latest Dr. Strange movie] and who's attending. The stats were well-displayed on that wide movie screen.

What Also Worked: A pair of videos -- one on the return of mass audiences to the movies this year, and the other previewing the lineup of major releases through the rest of 2022 and 2023. We especially appreciated the latter video's inclusion of non-blockbuster, non-franchise films, such as the offbeat breakout dramedy Everything Everywhere All at Once and the upcoming adaptation of popular novelWhere the Crawdads Sing.

What Didn't Work: Mentioning Moviefone as a new content contributor to Front+Center, then moving on to another topic without offering details on the content Moviefone will produce and when moviegoers will see it.

Bonus Points: More than one or two here. Serving attendees popcorn and cocktails on the first balcony pre-presentation. Bringing everyone to orchestra level for a big post-presentation bash with plenty of food and drink on hand. Running the full trailer for the firstAvatar sequel (Way of the Water) coming this December. (Upon viewing, we suspect there's a slam-dunk visual effects Academy Award nomination in the bag for this sequel next year.) Partilla interviewing Crazy Rich Asians/In the Heights director Jon M. Chu, who disclosed that a second Crazy film and a spinoff featuring one of the main characters are being developed. Finally, Flo Rida's post-presentation show. The popular rapper and his band of merry backup rappers and dancers had the crowd jumping.

Data Points: So far this year, 18 million people per week are watching films in theaters. Of that audience, 70 percent are adults 18-49, 50 percent adults 18-34 and 40 percent are multicultural. The latter group spends $39 billion a year on goods or services in major product categories. Eighty-five percent of the audience for a movie's theatrical release shows up over the first three weeks of the run. The Dr. Strange sequel earned $187 million during its opening weekend earlier this month.

News: Trailer Pack, Screenvision Media's first service designed for home viewing through smart TV sets, devices or multichannel bundles, will premiere this summer. The service will offer curated assortments of past, present and future movie trailers, and entertainment news factoids and trivia slides arranged by genre, audience demographic or special occasion. Viewers can assemble their own set of trailers to play any time, while brands can create and display their own short subjects. Screenvision is holding discussions for an overall Trailer Pack sponsor. Separately, new Front+Center pre-show formats are under development for display at stadiums, concert festivals and gaming platforms such as Super League and Roblox.

Parting Words: "There's nothing more gorgeous than these 40-foot screens. Movie theaters -- grand and epic, or local -- are today's cathedrals of storytelling. There's no better platform than cinema to reach and impact consumers. We want to be a central plan in today's media mix." -- John Partilla, Screenvision Media Chief Executive Officer

"The only way you are going to change the culture is to make it a shared experience. There's no bigger communal event than movies." -- Crazy Rich Asians/In the Heights director Jon M. Chu