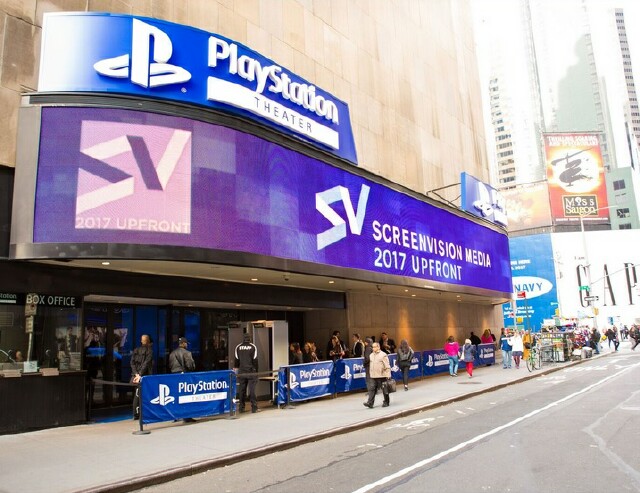 If it's late in the Upfront/NewFront showcase season, it's primetime for events involving the top two companies in the field of out-of-home theatrical, or pre-film, commercial sales.  As usual, Screenvision Media presented first (two weeks ago), with National CineMedia (NCM) going second (during Upfront week).

Venue:  PlayStation Theater on W. 44th St. near Broadway -- home to an event for the third straight week (BET in late April, followed by Defy Media first week of May).  For the first time in years, Screenvision used an actual theater, rather than turn an open space like Moynihan Station into a pop-up movie palace.  In this case, PlayStation was split in half, with the grandstand-like seating in the back for the presentation and the stage section available for food, drink and exhibits connected with upcoming blockbusters like the remake of Jumanji.  A video wall served as both room divider and wide movie screen, presenting the company logo moving from left to right as people arrived at their seats.  Company executives used the open space in front of the video wall as their stage area.  Grade: 3.5 Jacks

Presentation:  Over and over again, executives framed their remarks on an equation for successful results from cinema advertising.  Start with well-crafted messages specific to the medium (nicknamed premium video here); add the immersive environment of theaters filled with upscale, desirable crowds, and end up with the most memorable impressions a client can achieve.  "Not all impressions act equally," warned Screenvision CEO John Partilla, noting that some media (like broadcast TV) are witnessing a decline in desired demographics.  "Cinema is the greatest place to tell stories" and the audience is watching those stories unfold in growing numbers, resulting in last year's record-breaking $11.4 billion box-office among 1.3 billion visitors, Partilla continued.  What's more, advertisers are finding more disfavor with digital alternatives, due to concerns of having ads co-located near objectionable content.

"Even the biggest site has problems with brand safety," added Chief Revenue Officer Katy Loria (a quick broadside at YouTube without name-calling).  "In a landscape where attention is the new return on investment and engagement is the new currency ... we offer the ultimate storytelling canvas for impact."  As is the norm for these events, Screenvision's case was spiced throughout with trailers from upcoming flicks, and in a twist, there was a segment featuring a forecast of the top five movie trends of 2018.  No. 1: Anticipate one or more blockbusters every month.  Grade: 4 Jacks  (Pictured below, left to right: Partilla; Screenvision Media Chief Strategic Development Officer John McCauley; Katy Loria, and National Ad Sales Executive Vice President Christine Martino.) 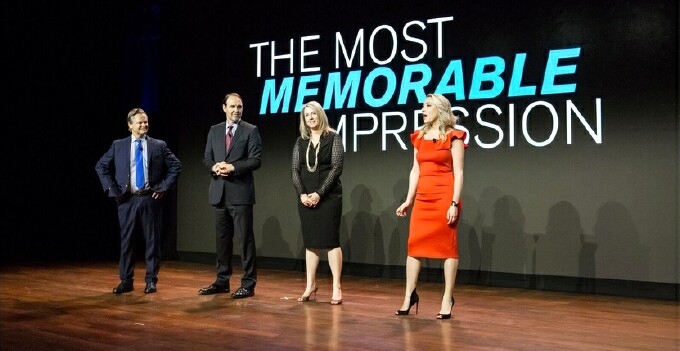 News:  Creation of "10 Pack," a sales initiative where sponsors get prime commercial placement before 10 tentpole-distributed blockbusters spaced throughout 2017-18.  This package deal will only be available to a limited set of clients who must agree to an upfront buy.  Those advertisers (and others) also can participate in a separate research venture dealing with neuroscience trends among movie audiences.  Another new tool being introduced in the coming months is Cintel, a methodology brands can use to target commercial content or placement by behavioral and psychographic data.  Grade: 3 Jacks

Host:  A vote for best tag-team presenters of the 2017 Upfront season to Katy Loria and National Ad Sales Executive Vice President Christine Martino.  They flavored the majority of information and advocacy with nice unforced humor between each other.  Yes, they even spoofed the Best Picture announcement fiasco at the Academy Awards.  Before introducing a trailer chosen in advance by attendees, Martino opened a red envelope with the choice, and Loria announced “LLL” for short.  Partilla was engaging with his delivery of opening and closing remarks.  Grade: 4 Jacks

Star Time:  None in attendance, therefore no Jacks grade.

Cuisine:  Outstanding and plentiful, served buffet-style from several stations inside and outside the theater.  Best eats: Korean fried chicken, portabella mushroom parmesan and a glazed donut sandwich with pulled pork.  Worst eat: the salad with salami chunks (could have used a touch more dressing). Grade: 4 Jacks (Note: Cuisine ratings do not figure into the overall Jacks score.)

Overall Grade: 3.5 Jacks Smooth, pointed presentation and executive presenters.  Curious why there was no effort to launch something truly out of the box like virtual/augmented reality content, or original short subjects beyond the celebrity profile or interview with branding opportunities, or ticketing via smart TVs?  Again, just curious.