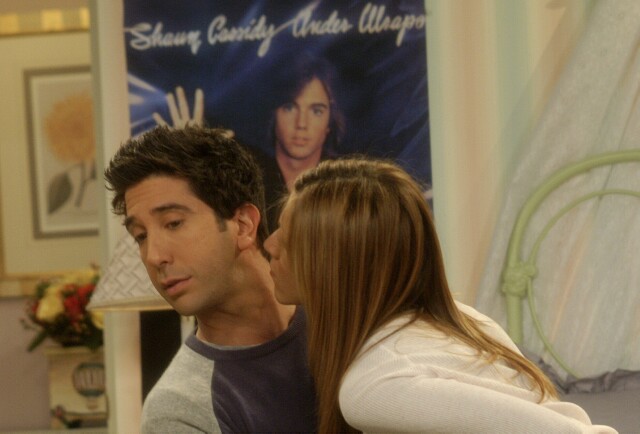 Throughout its ten seasons, many celebrities were given notable mentions or in some way included on Friends without physically being there -- leading us to believe you didn’t actually have to appear on the series to become a Friend of Friends.  In season eight (episode 12), The One Where Joey Dates Rachel (Part 2), Joey (Matt LeBlanc) and Rachel (Jennifer Aniston) discuss the fact that Rachel has never seen the 1983 horror classic Cujo.  Following a disastrous date, Joey comes home to find Rachel attempting to watch the Stephen King movie by herself.  Completely terrified, she asks Joey to protect her, and given his developing feelings for her he’s only too happy to oblige (picture below).

For Cujo star Dee Wallace (who also starred in E.T. The Extra-Terrestrial), that notable mention was the next best thing to having appeared on the show.  “I love Friends,” she beamed when MediaVillage asked about the movie’s mention in the show.  “It was cool they picked that movie.  I do hear a lot of people say that movie scares the bejesus out of them, maybe because it could really happen.”  The only drawback for Wallace?  No residual checks from the umpteen million re-runs!  “You don’t get paid for mentions!” she laughed. 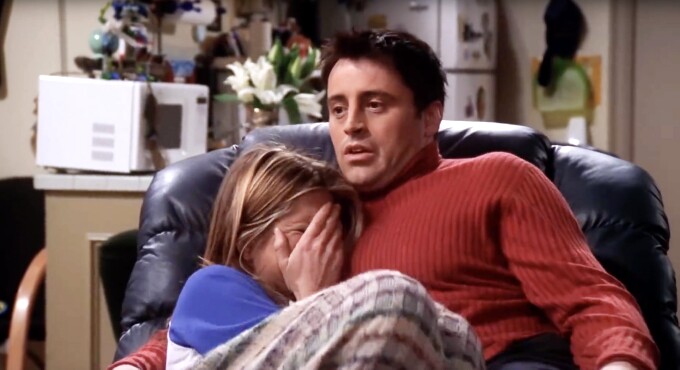 During the late ‘70s and early ‘80s, singer/actor Shaun Cassidy reigned supreme as a pop idol, thanks to hits like That’s Rock and Roll and Hey Deanie, and his starring role as Joe Hardy opposite Parker Stevenson in ABC’s The Hardy Boys Mysteries.  So, it was only fitting that a young Rachel Green would have been obsessed with him.   Cassidy received two very notable mentions on Friends, first in 1999’s The One with the Ball (season 5, episode 21) in which Rachel purchases Mrs. Whiskerson, a very expensive hairless cat.  When she tells Ross (David Schwimmer) she’s bought something she’s always wanted “since being a little girl,” he replies, "You bought Shaun Cassidy?"  To which she says, “No, I wish.”

In the episode 13 of the final season, The One Where Joey Speaks French, Cassidy is again referenced, this time as Rachel and Ross visit her childhood home to see her father after he suffers a heart attack.  While there, the duo ends up in Rachel’s perfectly preserved childhood bedroom where, low and behold, a poster of Cassidy’s 1978 album Under Wraps is still hanging on the wall.

Cassidy, who retired from live performing some 40 years ago, and has since carved a very successful career as a television writer and producer, recently made a return to the stage with a few small shows on the East and West coasts.  It was during one of these shows that he revealed his Friends connection runs far deeper than just being a poster on Rachel’s wall.

“I’ve been lucky and have had some really great jobs,” he told the enthusiastic crowd earlier this year during a performance in California.  “My first job was a magician and I used to do magic shows, so from the age of 15, I did children’s birthday parties and worked at the Magic Castle on Sundays.

“I did a magic show for a little girl named Jennifer Aniston,” he continued.  “Years later I was working for Warner Bros. as a producer, and she was working on a show you might have heard of called Friends.  They called from the show and asked if they could use a poster of me in a scene in Rachel Green’s childhood bedroom.  I said, ‘Sure!’  Afterward, she signed it for me.  It said, ‘Dear Shaun, Thanks for the awesome magic show, Love Jen.’  Cassidy then launched into his cover version of the Lovin’ Spoonful song Do You Believe in Magic, a hit for him in 1978.