#SheIsEqual -- A Promising View of Tomorrow 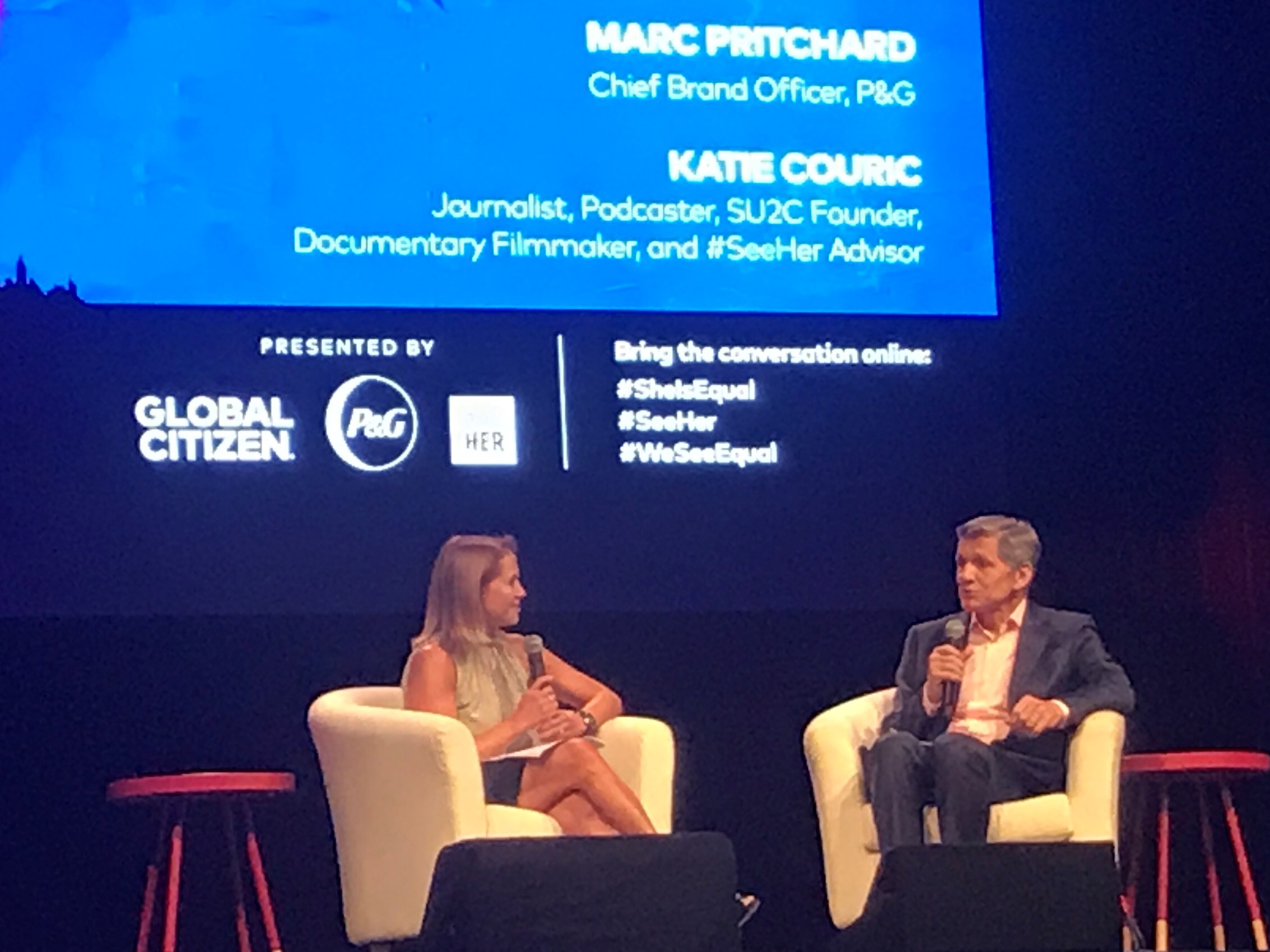 The day after the hearing in which Dr. Christine Blasey Ford recounted a high school assault, reportedly at the hands of the man who would become the next Supreme Court Justice, I attended the #SheIsEqual Summit.  Taking place during U.N. General Assembly Week, the event was co-hosted by Global Citizen, P&G and the ANA #SeeHer initiative to accelerate gender equality.  It was an uplifting day for the private sector and the entertainment community to engage in public policy.

The irony of the phrase #SheIsEqual weighed heavily at the event's outset.  It was only hours prior that an all-male Republican Judiciary Committee illuminated the lasting impact of gender-based trauma, even as their concern over public perception lead them to hide behind -- in the words of Mitch McConnell -- a "female assistant," Arizona prosecutor Rachel Mitchell.  Ford was not the only one reliving this trauma; the National Sexual Assault Hotline saw a 201% surge in calls after her testimony.

The hearing was fresh in memory, yet within minutes the summit's inspiring purpose took hold.  A variety of speakers and gender-equality-based initiatives delivered much-needed hope to the attendees.  Here are some of the empowering messages from the #SheIsEqual Summit.

Use Your Voice to Affect Change

As Hugh Evans, Founder and CEO of Global Citizen, and Carolyn Tastad, Group President of P&G North America, took the stage, Tastad shared the alliance's mission, which is to "use our ad voice to tackle bias, spark conversations and motivate change."

Chief Brand Officer of P&G Marc Pritchard, who will be inducted into the Advancing Diversity Hall of Honors on January 9 at CES (along with fellow #SheIsEqual Summit speakers Madonna Badger and Alma Har'el), spoke about the #SeeHer initiative.  "We brought together more than 75 companies -- many of which are competitors -- to promote accurate, positive portrayals of women in advertising, media and entertainment," he said.  "We need tobe the change to make a difference."

Pritchard then flipped the switch, interviewing Katie Couric about her partnership with P&G to create and support smart, thoughtful, empowering content developed by women to suit a variety of formats and platforms.  Katie Couric Media is founded on the principle that content powered by women is important.  "We need more diversity in our stories, in our representation in government," said Couric (pictured at top with Pritchard).

Couric touched on Anita Hill and the Clarence Thomas hearing some 27 years ago, and how the Kavanaugh hearing "underscored how little progress we've made with regard to sexual assault."  When Pritchard asked if she had one word of advice for the audience, Couric said, "Vote. Get off your butt and get involved."

The Power of Creativity to Influence Our World View

Philip Thomas, President of Ascential Events and Chairman of the Cannes Lions International Festival of Creativity, addressed how marketing and advertising dwarfs the influence of TV and film.  "Creativity can drive business and can make a change in the world," he said.

Thomas was joined on stage by Madonna Badger, Chief Creative Officer and Founder of Badger & Winters.  Badger declared one of the highlights of her career was the moment she realized the "power of creativity to illuminate problems, bring to life solutions and advocate for women to be whole human beings.  And strong."  Her subsequent work on campaigns such as #WomenNotObjects and Olay's #FaceAnything does just that.

Alma Har'el, Director and Founder of #FreeTheBid, spoke with Director Viridiana Pérez and Connie Lim (pictured below), better known as musician and producer Milck, about how the industry systematically keeps women out of the creative process.  With #FreeTheBid, Har'el encourages agencies to represent at least one female voice during the bidding process and used the occasion to announce she was now adding composers to the database of female directors.  For Har'el, having women behind the camera is important because "the female gaze has the potential to change the world.  Little boys need to see themselves through the eyes of women." 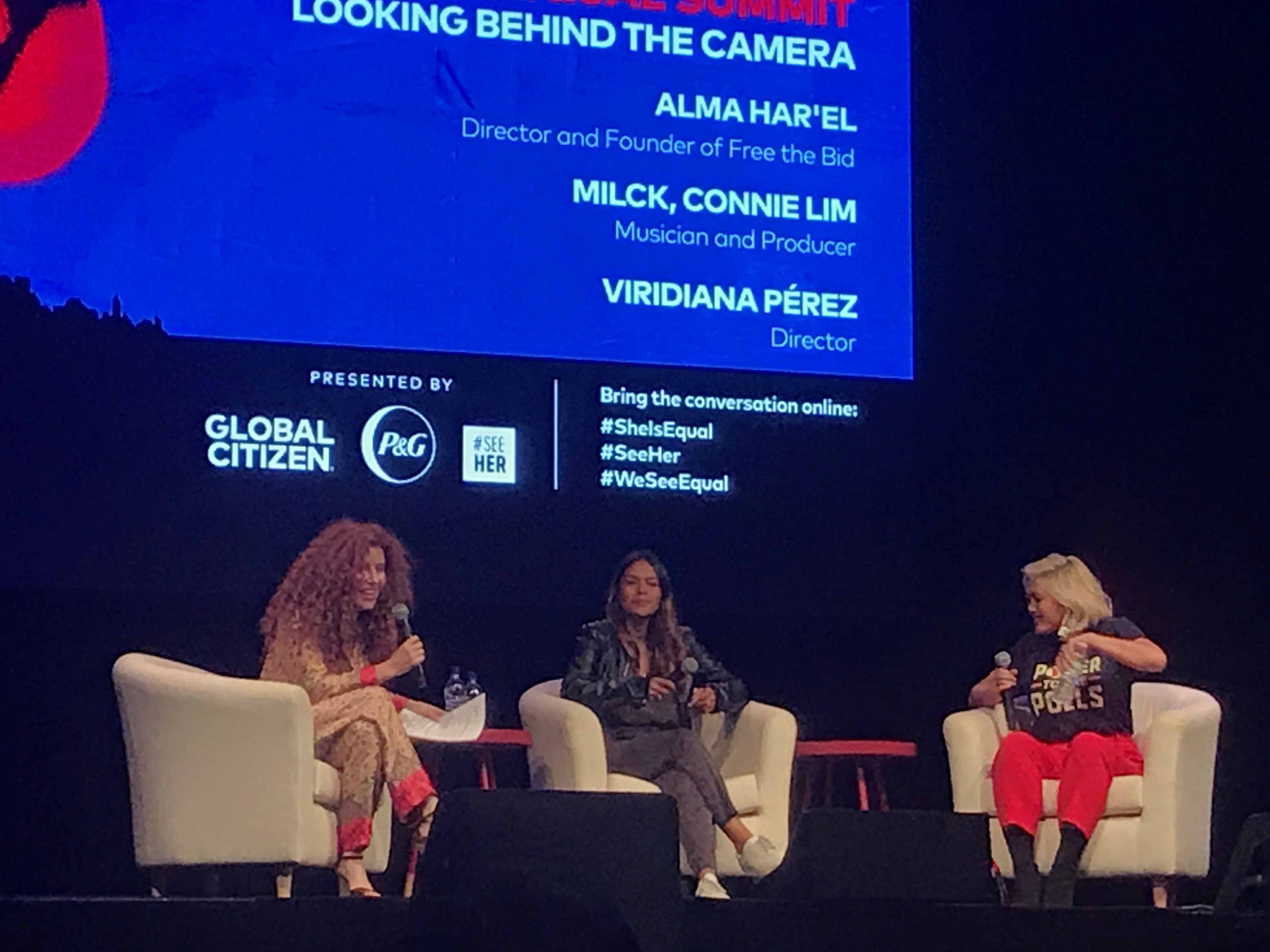 Actress, producer and entrepreneur Reese Witherspoon (pictured below) admitted that when she was young she wanted to be the first female President of the United States.  "We tell girls they can be anything they want to be, but do we believe it?" she asked.  Witherspoon launched her media company Hello Sunshine -- which shares stories about and created by women -- out of frustration.  Upon receiving yet another bad script with a one-dimensional female character she realized, "This isn't good enough for me or my very talented female counterparts.  I want to tell stories with the world I walk through every day being reflected on the screen.  Storytelling is changing because we're changing the storytellers." 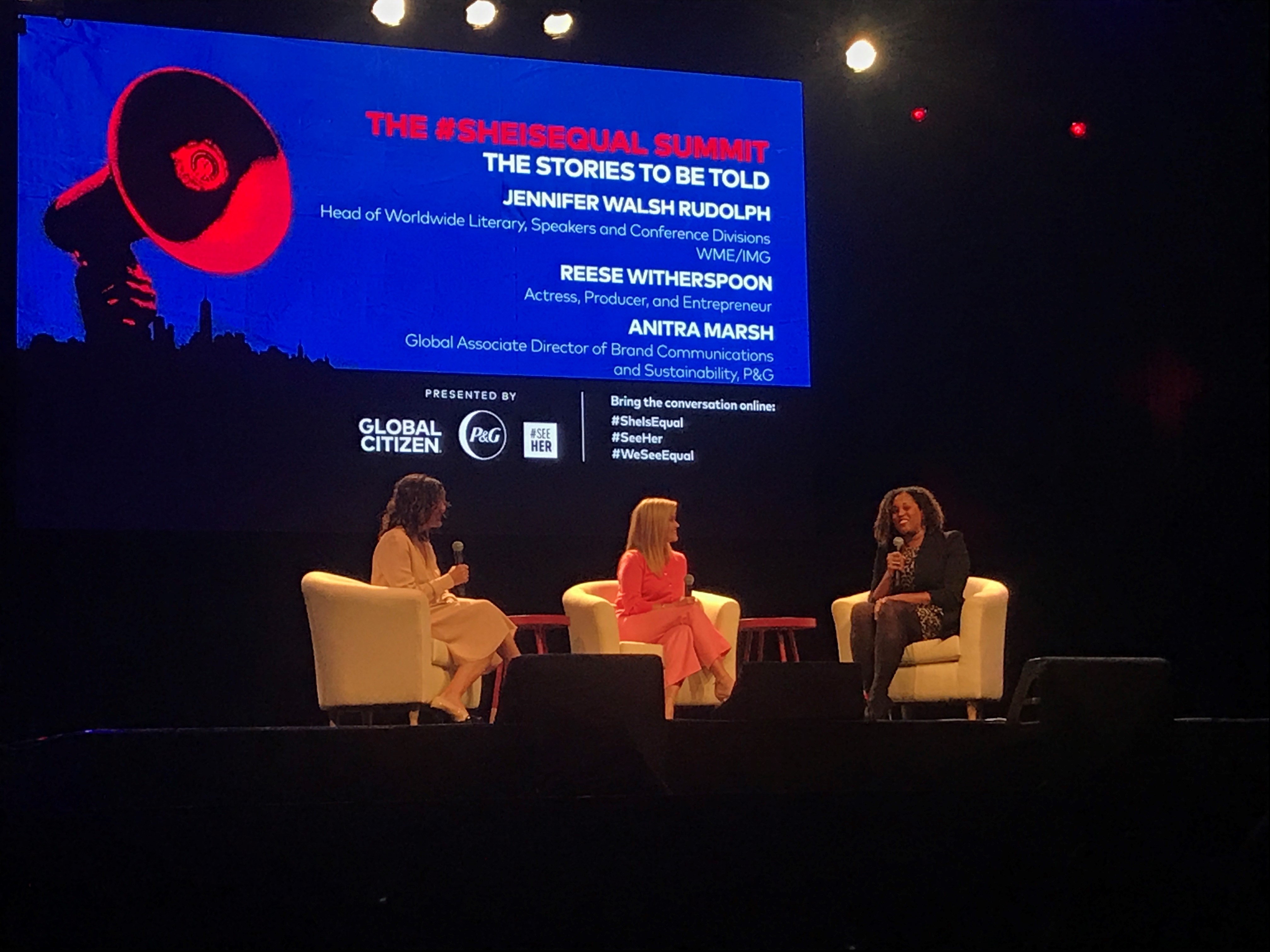 Women -- and Social Media --Can Change the World

While much has been written about the use of mis- and disinformation around the 2016 presidential election in particular, Witherspoon spoke of the positive influence of social media and the game-changing impact of streaming.  "Social media and the emergence of streaming changed everything," she said.  "We know what the audience really wants, and with the use of data it has helped us create more diversity in storytelling."

Model and advocate Jillian Mercado (pictured below) echoed this sentiment about democratization of voice through social media and its ability to create positive change in the world.  Diagnosed with spastic muscular dystrophy, Mercado is a wheelchair user who has been featured in ads for Diesel Jeans, Target, Nordstrom and Olay.  Represented by IMG, Mercado landed her first gig with Diesel after they asked her why she should be chosen and she responded: "Because I want to change the world."  That did it.

"Being a woman, you get tested everywhere," Mercado said.  "But life is really beautiful, and individually we should share stories.  Explore life to the fullest.  Talk about the things you want to see changed in the world.  With social media, it's a great time to be alive." 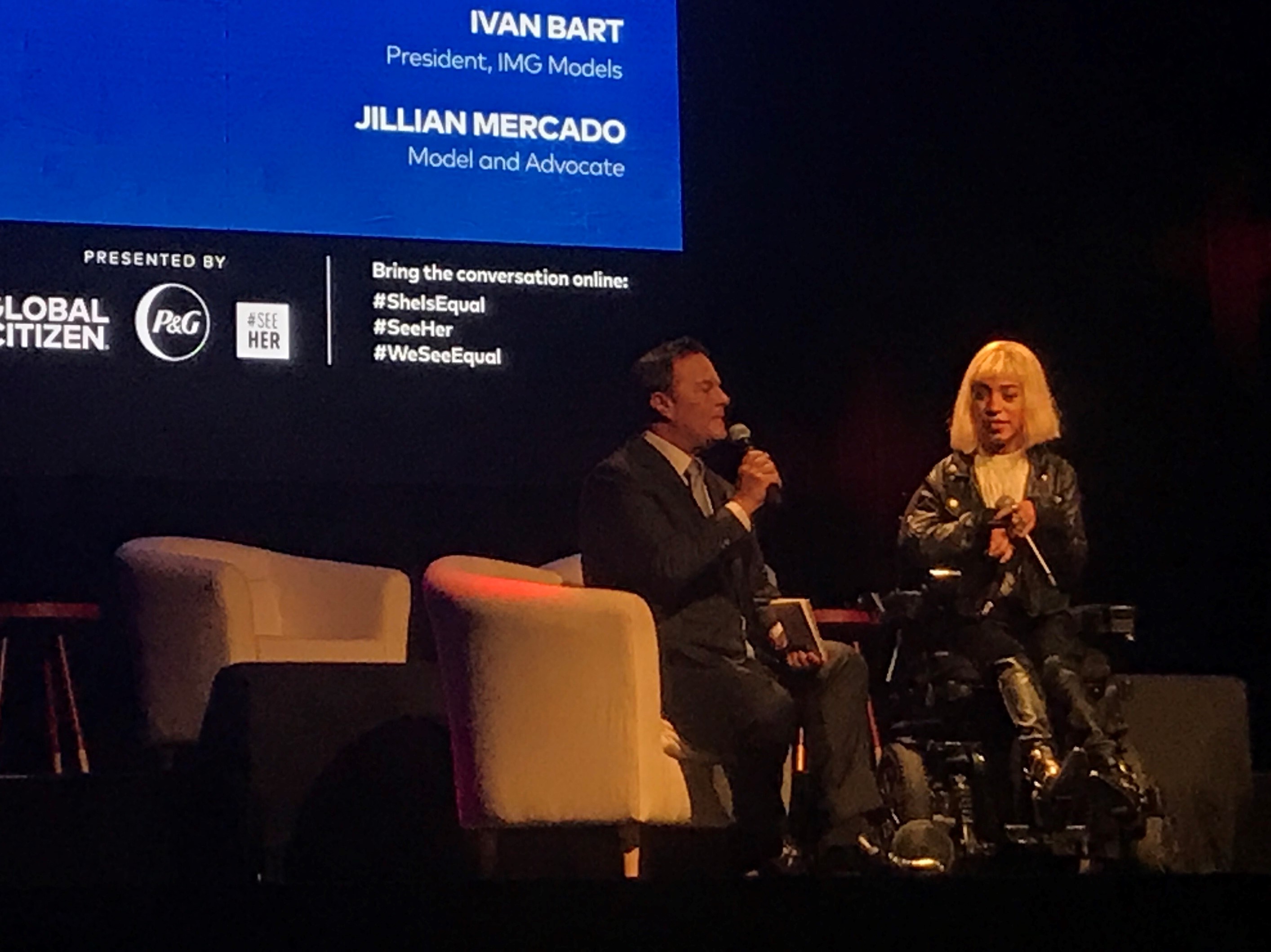 One thing Dr. Ford's testimony and the #SheIsEqual Summit reinforced is the power of using your voice.  #SheIsEqual.  By continuing to speak out and use our voices together, she -- we --will be.  Tomorrow.