Shuttering the Newseum: It's Time for Big Media to Step Up

By Kent M. Harrington January 16, 2020 In the National Interest Archives 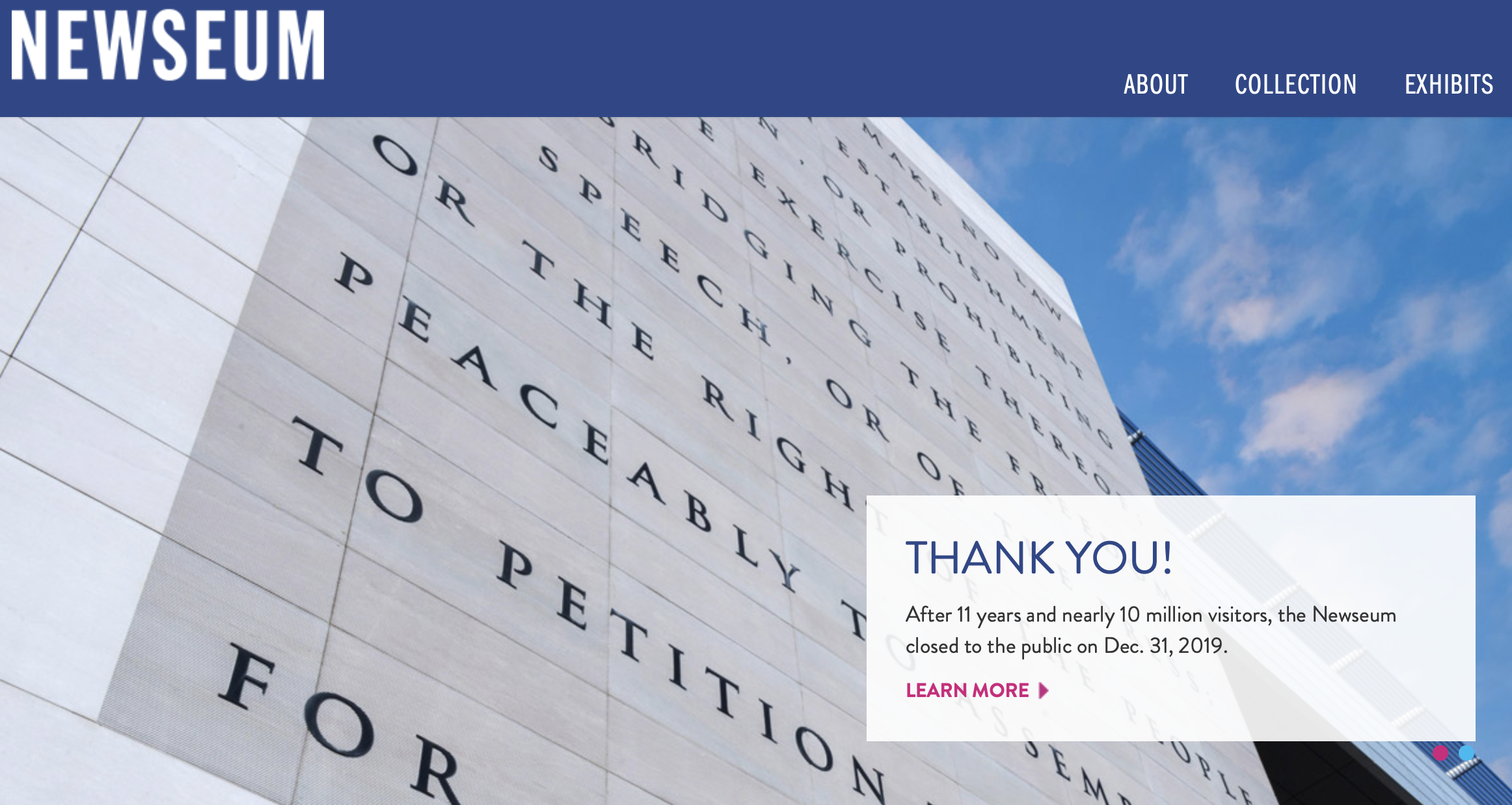 The decision last month to shutter the Newseum, a Washington, D.C., fixture since 1997, couldn't come at a worse time for journalists, or for Americans who should understand why their job and the First Amendment matter. The Newseum's sponsor, the Freedom Forum, says it will push on. It has a laudable goal: to educate the public about a free press.

The media giants who own the news should step up. After all, they spend billions on marketing, talent, and technology to create and sell Americans their next superhero. A few bucks to help the same audience learn how the Constitution and government work isn't such a big deal.

The history of the Newseum makes clear that, even for good causes, timing is everything. Cutting the ribbon to open pricey, new real estate in 2008, just as the economy tanked, couldn't have come at a worse moment. Higher admission fees and leasing space failed to fill the financial hole, squeezing the Freedom Forum's support, even as its endowment shrank. Ironically, the financial bind emulated journalism's trajectory as bankruptcies, consolidation, and layoffs hollowed out old-fashioned newsrooms, as well as their New Age web versions, whose revenue models also went south.

With deeper pockets and grand ambitions, Johns Hopkins University has purchased the flashy 400,000 square feet of space in the shadow of Capitol Hill. Presumably, its $372.5 million investment in marble, glass, and glitz will help its professors showcase their wares. Unfortunately, the people who should be educated aren't the university's target market: Washington's policy wonks, politicians, and aspiring career officials who will soon have a new spot to get their academic tickets punched. Rather, the ones who need schooling are average citizens who were well-served by the effort that just closed its door.

Explaining why a free press is important in a democracy, of course, isn't a stand-alone chore. It's embedded — or should be — in ensuring Americans understand how their politics and government work. The Center for American Progress, a Washington think tank, released a report last month on that task. The report, "Strengthening Democracy with a Modern Civics Education," digs into the state of civic education and its implications and takes a comprehensive look at why civic literacy matters. Not surprisingly, the authors found that knowing more isn't only about becoming more discerning; it also motivates people to be involved in their community, including getting out to vote.

To its credit, the Center's research went well beyond surveys of what young voters know — or don't — about the Constitution and their government. The authors evaluated civics courses in detail. Their criteria included whether courses taught about topics such as the nature of democracy, the Constitution, public participation, and voting rules and rights. The researchers also reviewed graduation requirements and test results in the 50 states. Most important for journalism, they included whether civics courses addressed the media's role and media literacy; that is, the students' ability to deal with the rise in propaganda and bogus news.

When it comes to whether schools are delivering what young voters need to know, the findings aren't reassuring. Take the requirement to study civics: Thirty states require a one-semester civics course; eight more require two semesters. While some states include the subject in history or social science courses, overall, 25 percent lack a dedicated civics program. As for the substance of the lesson plans, the researchers found only 26 states — barely half — met their standards for a robust course offering.

The media does get attention; two-thirds of the 50 states include its role and media literacy in their courses. But the educational challenge outside, as well as within the classroom, is daunting. Studies by Avaaz (a nonprofit that tracks fake news), the Pew Research Center, and Stanford report that Americans are struggling with a fake news flood. Add to their inability to tell fact from fiction their deficit in civic knowledge — according to an Annenberg Public Policy Center survey in 2016, only 26 percent could name the three branches of government — and, as the researchers attest, the vulnerability to disinformation is all too clear.

That's why the corporations that own the news business need to step in, and civic education is a good place to start. The Freedom Forum has announced that Newseum's mission is continuing through digital outreach and web-based programs, as well as online classes available to schools. ABC, Bloomberg, Comcast, Cox, Hearst, NBC, News Corporation, The New York Times,andTime Warner all commendably served as the Newseum's founding partners. They and their corporate heirs should ante up again with contributions beyond money.

With professional journalism under attack from a president intent on delegitimizing its crucial role and adversaries in Russia and elsewhere mounting their offensives against American democracy, the media giants have a unique capability to help. Their talent and technologies can produce and distribute educational programming in the public service. They did their duty 80 years ago when Hollywood went to war, educating Americans about their adversaries, as well as what they could do on the home front to aid the battle abroad. Boosting the country's defenses by helping to fill the void in civic knowledge is no less important in 2020.

Thomas Jefferson, one of the Constitution's authors, wrote in 1789 that people needed to be well-informed to be trusted with their own government. Jefferson, who knew well the challenges facing the new nation, also was an ardent advocate of the Bill of Rights, including freedom of the press. It's a safe bet that the country's current political perils and the findings of the Center for American Progress would raise his eyebrows if he were around today.