Sinclair's Fledgling "The National Desk" Grows Up Fast and Strong 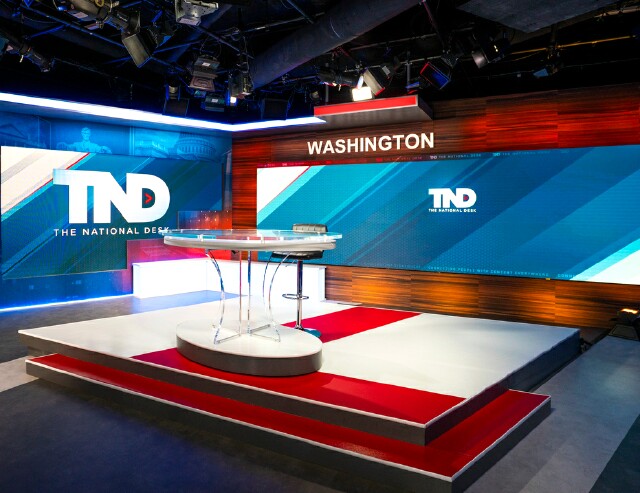 While it faced the challenges of launching during the COVID-19 crisis, a national news operation from Sinclair Broadcast Group is on a major growth spurt on several fronts. Leveraging the news content and expertise of Sinclair's local stations, The National Desk (TND) debuted in January 2021 as a live morning program. Since then, it has doubled its staff, expanded with a two-hour evening block, and enjoys a growing audience base. As if that weren't enough, it's receiving lots of positive feedback from viewers and an increasing social presence.

"It all started with some conversations about how we could leverage what we do so well to create a distinctive national newscast focused on the issues that are bubbling up in local communities," said Scott Livingston, Senior Vice President of News for Sinclair Broadcast Group (SBG). He noted that Sinclair has 72 newsrooms doing lots of original stories across the country. Leveraging those resources into a national newscast made enormous sense.

After extensive research and testing, the Sinclair team focused on providing viewers with a unique news experience. "In the morning, we're preparing you for the big stories and what happened overnight," Livingston explained. "In the evening, we focus on three or four new elements to a significant story. Together, we're going on this journey of discovery.

Viewers are responding very favorably. "One way we know what we're doing works is that we've done follow up research several times now," said Mike Garber, Director of Content for TND. The survey responses have shown that the original vision for the service is well received, he added. "Viewers are seeing it in the product now, and they're gravitating towards it."

During the run-up to TND's launch, the project's entire team worked together in Sinclair's Washington, D.C. news station through the toughest period of the COVID-19 pandemic. "I thought it was really important for us to be in the building in person, because we had to build a culture," Livingston recalled. "Building a product is the easy part; the hard part is building the culture."

To do that, TND doubled down on all the safety protocols. "We're fortunate to have a facility in Washington, D.C., with enough space that we could work more than six feet apart and still create a collaborative experience," Livingston explained. "We were able to launch the show, never missed a newscast, and kept our team safe and healthy. But it was a significant challenge."

Leveraging the resources of Sinclair's local newsrooms is key to the success of The National Desk, Livingston said. "We typically have about seven to eight stories from our local affiliates, but we try to select stories [from] reporters that have been embedded in the local marketplace for years," he noted.

"We make the viewer aware that, for example, this reporter in Salt Lake has been reporting there for a decade -- unlike some other national news organizations, where the correspondent 'parachutes in,' spends 24 to 48 hours on the ground, then goes back home," Livingston said. "We go to local reporters who can provide unique context and clarity that the consumer really wants."

One example of that approach occurred during TND's coverage of a tragic event in Surfside, Fla. -- the collapse of the Champlain Towers South condominium in June 2021. "For two weeks we had live shots from our local station there," Garber recalled. "[Sinclair's reporters] knew the market; they knew exactly how this happened, and frankly they broke stories while they we were doing live shots with us."

Viewers have explained that they like the approach TND takes, giving them a tour across the country and capturing the pulse of America with four vital stories, Livingston said. "[The stories] may be from Tulsa, Seattle, San Antonio, Portland or Providence -- so they get a snapshot of these key stories that they probably have never heard of, because they're just starting to bubble up."

Garber noted that TND's Live Desk gives viewers "this living, breathing newscast of discovery. The Live Desk is another value proposition that no one else offers to the degree that we do."

There are a few layers to The Live Desk that offer viewers clarity on an ongoing, important story in a 30-second timeframe, Livingston explained. "News consumers want the 'what' and they want the 'so what' almost instantly. The goal of the Live Desk is to provide that clarity."

Another key component of The National Desk is its Fact Check Team, which peels back given pieces of information to determine their origins and validity. "We'll take a minute or two to say, 'This is what you're hearing, and this is what we found factually to be true,'" Garber said.

"We want to make sure we're always agile," Livingston added. "It used to be that news consumers would find news; now news finds them. We want to make sure that we are always in that conversation on all platforms. And that includes our distinctive website, thenationaldesk.com, so that when people go look for news, The National Desk is always in the palm of their hand or on their desktop or, of course, on their TVs."