Sir Martin Schools Me on Data, Creativity, and the Holy Trinity of S4 Capital 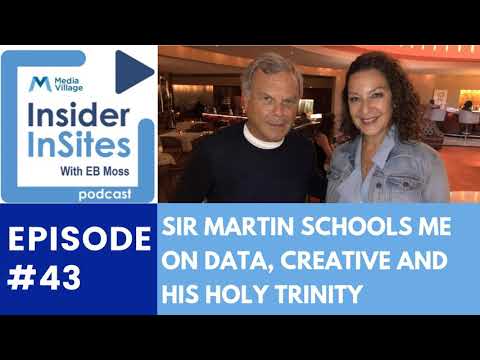 When you find out you're getting the chance to interview one of the best-known people in the ad industry, you want a little time to prepare, to study, and, in some cases, pray. I had to "carpe diem" when I learned I'd be speaking with Sir Martin Sorrell in just a couple of hours; grabbing time between his myriad panels at Advertising Week. As you listen to this podcast episode — and if you know anything about him — you'll realize I needn't have worried. The man who built the world's largest advertising and marketing services holding company had plenty to say, and said it in his usual no-holds-barred way.

From the mind of the man who conquered and is now looking reinvent the industry — and who has been spared neither praise nor criticism for his actions and comments — are opinions on everything from the "Holy Trinity" and principles he's set for his new(ish) venture, S4 Capital, to what he looks for in companies they might acquire, to what his mother would think of his ongoing drive for dominance in the world of digital media.

Trust me, you'll want to — even need to — download and replay this one to absorb it all. The following is just a brief topline, edited for clarity and brevity, but there's no substitution for this very original person.

You can listen here for the full podcast, where you'll hear Sir Martin's detailed point of view on everything from holding companies to investment strategies. And please subscribe to Insider InSites, on any of your favorite platforms: Stitcher, Spotify, iHeartRadio, GooglePodcasts, Apple, TuneIn, and YouTube,and help us spread the word of Sir Martin and others:

E. B. Moss: You literally defined the modern media agency business, from hiring the right people to…

Sir Martin Sorrell: …Some people don't think so. My mother thought so; but, yes, that's right.

Moss: You have a few other supporters beyond your mom. You're also known to be plain-spoken, so per your next panel title, what's your vision of "the new era of marketing?"

Sorrell:At S4 Capital, which we started a little over a year ago, we interpret it with four core principles. First, we're purely digital. So, we're focused on the growth part of the market. If the market is $500 billion, about half of that is in traditional and a little under half is in digital and growing at 20 percent — Lord knows what's happening with traditional... We believe in pushing on an open door, so digital is the first thing we're focused on.

The second core principle is what we call, maybe inadvisably, the Holy Trinity model: a first-party data model, fueling the development of digital advertising content and programmatic media planning and buying. The model now is a continuous loop, not tentpole campaigns. Big ideas are still critically important, but they're developed and refined, using data to improve, not hinder, creativity.... That, then, is distributed by programmatic media planning and buying. The data you get from that enables you to refine the content yet again. It's a circular process.

The third is a principle around the tagline of "faster, better, cheaper." Faster means more agile. Where I think the holding companies suffer is that they're cumbersome...sort of dinosaurs. Our model is a disruptive model [that] understands the technologies and the platform. There are probably 10 companies that are critically important to understand: Google, Facebook, Amazon, Tencent, Alibaba, Apple, and Microsoft — call them the seven sisters; and then Adobe, Oracle, and Salesforce. Then you might include IBM and SAP... and, obviously, there will be new entrants. But it's understanding the technologies behind all those companies.

Then, finally, we believe we should have a unitary structure.... All [six] companies that we've brought into S4 Capital so far [have basically been] half shares, half cash because we're not really interested in people who want to sell their businesses; [we're looking for] principals who want to buy in or sell in to our vision or concept...

Moss: And of those six companies, is one of them a data company? I thought I heard mention of you acquiring one.

Sorrell: ...We have not acquired or merged with first-party data assets as yet. Now, what we use is clients' first-party data. In the case of Netflix, we're using their data. We're using signals from Google, Facebook, Amazon, Tencent, Alibaba, et al, and we'll continue to do so….

Being a listed company, there are three characteristics we are basically looking for: The first is very strong growth on the top line…. Secondary, and not forgetting margin, we are interested in profitable companies, not unprofitable. We don't want to buy problems. Then the final sort of qualification: …We don't want any first-party data companies that have a technological base to them that is repeatable or that can be copied or disintermediated...

We're interested in putting together a unitary company, as the fourth principle talks about. The problem with the six holding companies is they're very fragmented still, and they're very vertical.... So, that's why I created more of a unified company.

...Behind your question is sort of that implication that creativity is narrowly defined. It's not Don Draper. That's the 19th and 20th centuries. We're talking about the 21st and 22nd, and the definition of creativity is far different. There are nerds who can be creative. It's not just that there are creative people [who] are creative and nerds [who] aren't. And, by the way, there can be creative people who are technologically proficient. It's not just nerds who are technologically efficient....

Moss: You've really accomplished everything, and, like Cher, you're basically known by one name, Sir Martin. So, wouldn't your mother say, "Take a rest"?

Sorrell: No, her philosophy, I think, just like my dad's, would be, "Keep going." The Saatchis had a couple of phrases: "Nothing is impossible," is one, which I agree with. And, "Never give up." I also find the quote, "It is not enough to succeed; others must fail," an interesting one.