Sitting Down with "The Donlon Report's" Joe Donlon 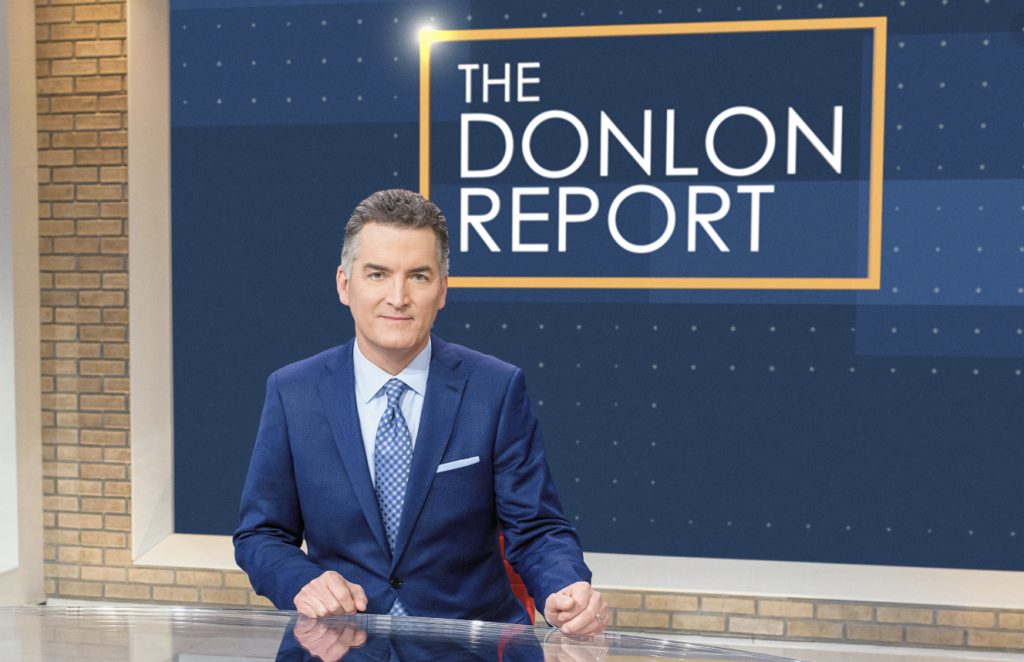 Just over a month ago -- on March 1st -- The Donlon Report debuted on NewsNation. Broadcasting on weeknights at 7pm Eastern, the show, which is hosted by the eponymous Joe Donlon, positions itself as an alternative to the fast-talking and often hyper-partisan shows that have all but defined cable news television. Complementing NewsNation's initial focus on providing middle-of-the-road reporting with an emphasis on analysis rather than commentary, shows such as The Donlon Report also aim to inject a touch of personality to the reporting. To this point, The Donlon Report joins a NewsNation evening line-up also consisting of shows such as Ashleigh Banfield's Banfield. (Watch Jack Myers' Legends & Leaders Conversation with Ashleigh Banfield.)

Donlon comes to this role after having spent his career in local television, having worked at KVOA-TV in Tucson, Arizona and, notably, at KGW-TV in Portland, Oregon. (He spent just shy of 21 years at the latter post.) Once Donlon left Oregon and began as an anchor on WGN-9 in Chicago in April '18, he then shifted over to NewsNation during the company-wide rebrand in September 2020. In an interview for this piece, I asked Donlon if he believes that his experience as a career local news journalist situates him particularly well for hosting his current show. I contrasted his experience in local journalism with that of other cable news hosts, who began their careers at more ideologically-aligned news outlets, such as, say, Tucker Carlson at The Weekly Standard or Chris Hayes at In These Times. To this, Donlon replied:

"Yeah, I've spent my career walking down the middle, or doing my best to try and walk down the middle. I think it does position me well for this. I think -- maybe -- people might watch and expect (or want) more passion or emotion. I want answers; I want people -- at the end of the hour -- to feel like they're smarter. I'm not a provocateur."

However, this point notwithstanding, Donlon and I discussed avoiding the pitfalls of those shows that endeavor so much to avoid any perception of bias or sensationalism that they drift too far to the other direction and become unnecessarily dry. As such, Donlon emphasized that he still "leans one way or the other on the guest" and that even though he is "not the bang on the desk, fiery host," there will be some of the occasional "testy exchange" or impassioned back-and-forth on The Donlon Report. As an example of one such exchange, Donlon pointed to an interview with Jenna Ellis, one of former President Donald Trump's attorneys, when she appeared on The Donlon Report in early March.

To the point of the show's effort to present various political perspectives, Donlon drew attention to one recurring segment on the show: Republican political operative John Hancock and Democratic political consultant Michael Sean Kelley debating various political topics or policy initiatives. In his interview with me, Donlon remarked that Hancock and Kelley share a close friendship that transcends their differences of opinion, and, exemplifying this, the two men were even playing pool together when Donlon had called to see if they would be interested in becoming regular guests on his show. Hancock and Kelley perhaps can, thus, serve as a 2021 version of a James Carville and Mary Matalin-style showcase in not letting one's political differences eclipse all else. This makes them worthwhile recurring guests for The Donlon Report, particularly given Donlon's remarks to me about the importance of finding shared jumping off points in an ideologically fissiparous nation such as ours.

The challenge for The Donlon Report is, of course, two-fold. First, as a new entrant into an already-crowded cable news space, it must seek to either pry away viewers from its immensely popular counterparts on Fox, CNN or MSNBC or encourage those who have been turned off by the typical cable news experience to give this more tame presentation of the news a chance. The second challenge is -- in a way -- up against human nature: As much as people, in the abstract, tend to voice a desire for non-partisan, fact-driven explanations of the issues of the day, they tend to vote with their feet (or their remotes) otherwise -- opting instead for the rancor and high jinks. (However, one might argue that that is just what they have become in the habit now of seeking, as the sensational has come -- perhaps just temporarily, though -- to rule the day.)

In fairness, as Matt Taibbi indicated when joining The Donlon Report on March 31st, the evening after my conversation with Joe Donlon, there is likely an untapped middle so to speak of people who are looking for something other than endless defenses of a given party line. As I discussed in a column in November of last year, CNN and SiriusXM's Michael Smerconish has persistently made a career for himself do something of this sort. And, further, the near-endless expressions of frustrations with the current news industry overheard daily -- and confirmed by the surveys -- does suggest that more of a "just the facts" approach could, very well, find receptive ears.

The alternative to what Taibbi described on The Donlon Report as the dominant media business model of today (i.e. "picking a demographic and dominating it") is to replicate more what the networks of yesteryear did (and were, in a sense, required to do): Go "after the entire audience." Donlon was quick to chime in that, as Taibbi knows, that is what NewsNation has been looking to do. The last three quarters of a century of advertising in the news space have, of course, largely been predicated on one of the ideas implied by Taibbi: When a news outlet can reach a broader audience, it can be attractive to a range of advertisers. However, recent developments in the news space (in online, print and television) have challenged that once conventional wisdom.

Donlon recognizes, only a month into his show's existence, that there is a long journey ahead: "It's an uphill climb...I think everyone realized that this was not going to be easy, and it wasn't going to be quick, so we plow on...and we adjust and we improvise." Taking a longer-term view, Donlon also zoomed out, comparing the current era at NewsNation to the early days of Fox News or CNN: "Considering where CNN was in the beginning, and where Fox was in the beginning, we're pretty well positioned." That positioning, of course, rests on the bet -- as Taibbi suggested -- that there is a sizable lurking audience eager for level-headed analysis, if only they would give it a chance.