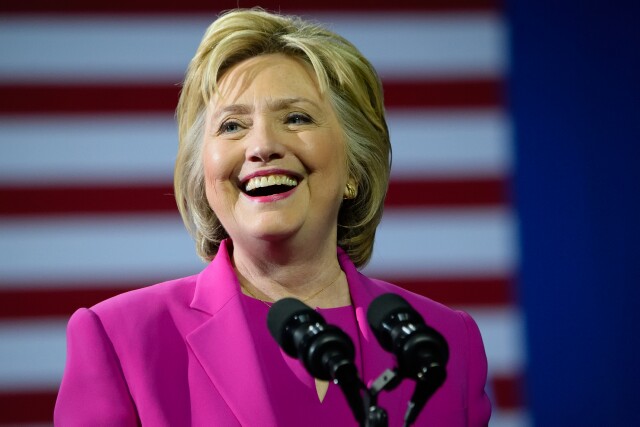 One of the most interesting aspects of this unusual election year is the early start to the advertising from the presidential candidates. If you live in a swing state, you've been seeing campaign commercials on TV since the spring. And if you don't, you've been seeing those commercials on your desktops, laptops, smartphones and maybe even your kitchen appliances. Although most political ads are produced by firms that have experience with candidates rather than consumer products, some ad industry pros are involved in Campaign 2016. For instance, Droga5 is working for Hillary Clinton. And Jeff Goodby and Rich Silverstein of Goodby, Silverstein & Partners created an ad questioning Donald Trump's qualifications to be president. Most of the commercials run so far have been for Clinton, as Trump has relied more on rallies, tweets and earned media. The ad community has been closely scrutinizing Clinton's pitches, praising some -- such as a spot that asks what kind of role model Trump would serve for America's children -- while judging others as subpar. The major criticism for Clinton's commercials is that they don't reflect how different Trump is from a traditional presidential candidate and how serious the consequences would be if he was elected. One new spot seems to address that, featuring clips of Republicans repudiating Trump. Still, Clinton's supporters, worried that her lead over Trump is shrinking, are urging her ad-makers to keep thinking outside the box. Here, then, are six suggestions for unconventional campaign ads for Clinton, some from me and some from ad folks. Note to the Clinton headquarters in Brooklyn: They're all yours, gratis. (For those wondering when this column will offer ad suggestions to the Trump campaign, please check back on the 12th of Never.)

1. The idea that comes up most often is for a contemporary version of the famous "Daisy" commercial from 1964 for Lyndon B. Johnson, which used the threat of nuclear war to portray his opponent, Barry Goldwater, as dangerous.

Clinton took a couple of stabs at that recently, but a lot of people feel those spots don't go far enough to paint Trump as a menace.

Clinton could adopt the Johnson campaign's apocalyptic approach by running a spot that ends with a nuclear mushroom cloud, the way "Daisy" did, and echoes the vintage ad's closing lines: "Vote for President Johnson on November 3rd. The stakes are too high to stay home."

2. Speaking of updates, many Clinton fans would like to see a commercial that revives the classic riposte to the Red-baiting senator from Wisconsin, Joe McCarthy, at the Army-McCarthy hearings in June 1954. "You've done enough," an aggrieved attorney, Joseph Welch, tells McCarthy. "Have you no sense of decency, sir? At long last, have you left no sense of decency?"

The concept: run an outlandish sound bite from Trump, then "answer" it by playing Welch's remarks (or have them read by someone with a familiar voice such as James Earl Jones).

3. Many Clinton backers want her ads to try to capitalize more on Trump's thin skin, pointing to the biting tweets from Sen. Elizabeth Warren that so successfully provoke him. For instance, how about a commercial styled as an endorsement of Clinton from "REAL billionaires," playing on the belief Trump isn't as wealthy as he claims?

Such a spot could bring together four billionaire Clinton supporters -- Michael Bloomberg, Warren Buffett, Mark Cuban and Starbucks' Howard Schultz. For a slogan, play off a vintage cigarette slogan -- "With men who know tobacco best, it's Luckies 2 to 1" -- and proclaim, "With men who know billions best, it's Hillary 4 to 0."

4. Ads that mock and belittle Trump over his admiration of, and ties to, Vladimir Putin could be more effective than ads that straightforwardly condemn him. How about an animated spot with cartoon characters bringing to life the Trump-Putin bromance, while the theme from the James Bond movie "From Russia with Love" plays on the soundtrack?

5. One of the most hilarious moments of the campaign so far came last month when Michael Cohen, a Trump adviser, offered odd, dogmatic responses to a CNN anchor, Brianna Keilar. A phrase he kept repeating – “Says who?" -- became a social media meme, suggesting it could be exploited to make fun of Trump.

There could be a series of short videos in which intemperate remarks by Trump are met with a "Says who?" or two, perhaps accompanied by introductions that pay tribute to the famed "Who's on first?" routine by Bud Abbott and Lou Costello.

6. Instead of trying to tiptoe around Clinton's age (she will be 69 on Oct. 26), her campaign could embrace it, given that older Americans have higher rates of voting than their younger counterparts. There could be a series of humorous videos about what the older demographic groups contribute, themed "Seniors for Hillary" -- or, better yet, "Alte Kockers for Hillary," using the Yiddish phrase that translates roughly as "old geezers."

To underline the message, the clips could be cast with well-known older actors and actresses. Imagine the impact of, say, commercials starring Mel Brooks and Carl Reiner as they reprise their popular "2,000 Year Old Man" skits.

Indeed, the more funny people who are involved in crafting Clinton's appeals, the better, to help come up with the right kind of needling to provoke her opponent into (additional) intemperate behavior. Comedians with followings in social media would be especially valuable in reaching out to younger voters.