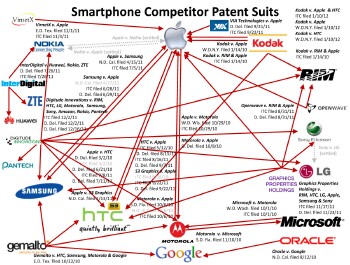 Microsoft, Apple and Blackberry, unable to halt Android’s Smartphone dominance (81% global market share in Q3, 2013), adopted a new tactic to topple Google -- becoming patent trolls. Based on a portfolio of mobile patents acquired from Nortel in 2011 for $4.5 billion ($750,000 per patent), their Rockstar consortium filed suit last week against Google, Samsung and other Android players. It will now be in the hands of a jury in the Eastern District of Texas, a rural district whose overwhelming tendency to rule in favor of patent infringement has made it the most popular US jurisdiction for patent litigation.

In reality, despite suing and countersuing one another worldwide over the last few years, little has been resolved. Google further protected its patent position by acquiring Motorola last year, and its 17,000 mobile related patents. So what is the future for Smartphone IP?

Marshall Phelps, who previously led IP Strategy at both IBM and Microsoft, shared his views this week at the AIPPI conference (http://aippi.org.il) in Tel Aviv. “Within 10 years, the Smartphone platform wars will be over, replaced by a series of licensing arrangements. I have seen estimates of 10’s of thousands of patents implicated in the Smartphone situation. With that much intellectual property involved, no one can realistically build a Smartphone risk-free or without the IP of others”.

Today, some 60% of patent litigation is driven by entities which do not produce anything or compete in any particular industry. This group of patent litigators is referred to as “Non-Practicing Entities” or NPE’s.

The America Invents Act, passed by Congress in 2011 was supposed to address some of the NPE litigation abuses. According to Randall Rader, Chief Judge for the United States Court of Appeals for the Federal Circuit, and another AIPPI speaker, reform is needed to “protect the benefits of a robust innovation policy and in part to simply correct injustice…the definition of troll will always be over inclusive or under inclusive to the detriment of justice”.

Trevor Cook, Chairman of the British Copyright Council and Partner at Bird & Bird, cited the emerging importance of the Unified Patent Court in Europe and how it will affect patent litigation. For example, many believe the “British model,” or imposing fee reversal in cases of abuse, could limit some of the more egregious cases. The US system does not force plaintiffs to pay the costs and fees of the defendant.

The final word in the matter will be left to Steve Wozniak, Apple’s co-Founder, who recently told the BBC, “There are good things I see on Samsung phones that I wish were on my iPhone. I wish everyone just did a lot of cross-licensing and sharing the good technology. All our products would be better. We’d go further.” Until that happens, the trolls have the advantage.