"Sneakerella" Takes a Beloved Disney Classic, Steps It Up and Makes It Matter 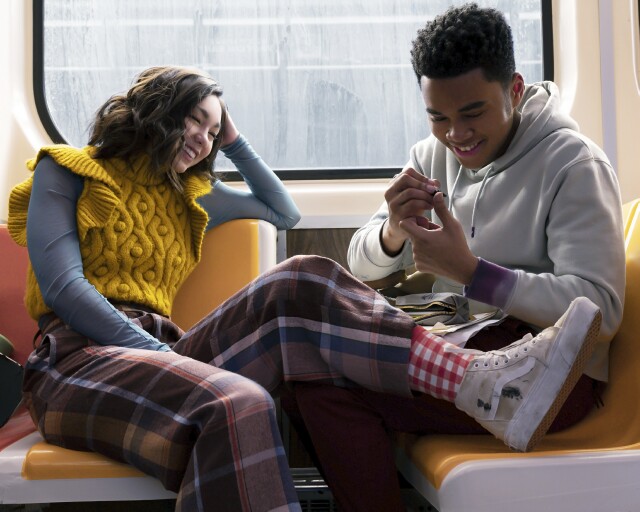 On the sort of spring night that makes people fall in love with New York City (or just fall in love), daylight lazily gave way to night as Disney+ staged its world premiere of Sneakerella Wednesday. With the Brooklyn Bridge stretching on each side behind the screen and the financial district skyscrapers behind the audience, attendees were nestled among rooftops to watch an age-old story told in a very new way.

The public domain fairy tale is one we know well, or at least thought we did. Usually, the main character is a sweet, motherless girl abused by her wicked stepmother and nasty stepsisters as she toils in some vaguely medieval, likely central European, municipality. Sneakerella steps it up and makes it current. With sneaker culture as the backdrop, our hero is a young Black man, El (Chosen Jacobs). True to the story, his mother has died. She had a sneaker store and encouraged El's art to design sneakers.

The story unfolds in Astoria, Queens and Manhattan. El is put-upon. His stressed-out stepfather makes him stock boy, who also cooks and cleans. El's two idiotic stepbrothers plot against him. Of course, good must conquer all -- this is a Disney movie. But how we get there is the joy of this musical. And as happy as Jacobs was (the young man could not stop smiling), no one was more infused with joy than the newly minted president of Disney Branded Television, Ayo Davis.

"This is about making dreams come true," Davis told MediaVillage in an exclusive interview after the screening. "It is so hopeful. To see a young man in a gender-swapped movie that he is sharing with the world. And this is a movie that shows us that we can chase our dreams. When you work hard enough, and your passions are greatest, this shows that you can do it."

Wearing a hot pink satin pantsuit and silver sequined sneakers -- kicks were crucial this night -- Davis could not be the collected executive she must be in meetings. She was so excited that she was jumping, and there was no way she was acting. Davis believes in this musical (lay the odds now that it will wind up on Broadway) because it proves the power of determination, community and goodness.

Much is packed into this 90-minute movie with songs and dances, including two lovely moments of inclusivity gracefully woven into the film. In the opening number, where El gathers a crowd as he dances down his street, a young man on crutches dances along. No big deal is made of it, but he uses his crutches to boogie. And later, El's best friend, Sami (Devyn Nekoda, pictured at top with Jacobs), a skateboard-riding social media maven, is on the subway with him, and the revelation that she is gay is casually worked into the conversation.

Sami and El are heading to the sale of a limited-edition sneaker. They're working-class kids from Queens, so they pool all of their resources to buy a pair to share. While waiting in line for the shoes, they meet a lovely young woman, Kira (Lexi Underwood). She's more of a princess, in a good way. Her father is a legendary basketball player turned sneaker mogul (John Salley). Kira and El are clearly smitten with each other, but there must be some drama and wrong turns until their happily ever after.

Along the way, there are sweet nods to the animated Disney classic Cinderella. At one point, Kira hums, "A dream is a wish your heart makes." Their chariot, a retooled orange muscle car, has a fun license plate, and El's fairy godmother is a fairy godfather, Gustavo (Juan Chioran). Since he runs the community garden, Gustavo knows about planting seeds.

In addition to acting, Jacobs gets to sing and dance throughout. "This is the first time I got to do everything I ever worked on," said the 20-year-old who was in It and God Friended Me.

While most movies on TV are shot in about a month, Jacobs said this was a four-month shoot and had a month of rehearsal. "El is a dreamer," he explained of his character. "El is a kid who doesn't always have the best cards in his hand but finds a way to flip them."

When life feels too tough and he can't find his way by himself, El knows he has true friends and caring neighbors who will help him. They guide him and love him.

Sure, there's a sprinkle of fairy dust magic that helps it all along. Who couldn't use a little fairy dust? What wouldn't you give for a Gustavo? Or even for a subway ride where the worst thing anyone breaks out is a song and dance?

"I think it resonates with everybody," Ayo Davis noted.

"We really are the only content provider to go from 2 to 102," she said of Disney's broad appeal. "Our goal is to ensure we are telling stories that matter to everyone, and I think this does that."

Sneakerella premieres May 13 on Disney+.