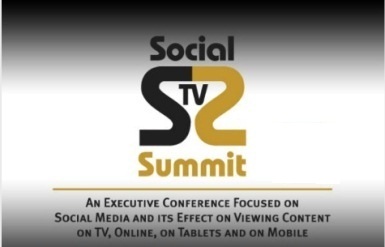 Andy Batkin and Jack Myers presented the third Social TV Summit in San Francisco last week with an all-star lineup of speakers. The event focused on the monetization of Social TV and shared case studies of successes, as well as insights on failed social TV efforts. The next Social TV Summit will return to the Bel-Air Country Club in Los Angeles on July 19. For information visit www.socialtvsummit.com. Below are video highlights reprinted fromLost Remote.com.

A couple hundred execs gathered in San Francisco for the Social TV Summit, and as always, we've pulled together some highlights from the event. This isn't an exhaustive list; for more, you can glean the highlight clips provided by Snappy.tv.

development process, and how second screen experiences are something entirely new. Yahoo/IntoNow's Adam Cahan (pictured) summed up the social TV product challenge in a "post-PC world" this way: "Television has been an incredible medium for brands to tell their story, but transferring that into a direct response environment or bringing that to a device is a fundamentally different proposition," he said. "It's a very different set of consumer interactions." (Click the photo to watch this panel.)

- Microsoft's Pete Thompson shared that the new Sky TV application on Xbox Live — which offers up to 32 live channels for subscribers — features one of the first truly social TV experiences on Xbox. "You can be on Xbox Live and see where all your friends are watching TV, and their avatars pop up as you go through the program guide," he explained. "You can join them and have your streams be connected at the same time, so you can be watching and talking and interacting at the same time." Thompson said Xbox is also thinking about "reach clients" — second screen devices — and how to connect those to the Xbox Live experience, as well.

- AOL's Janet Balis said they're quickly ramping up for the launch of Huffington Post Streaming Network in Q2 of this year. "We're literally building studios," she said, offering a little insight into the 12-hour-day streaming service. "Imagine pulling reporters right off the newsroom floor… [and] bringing the audience into the dialogue, where normally comments and social activity happens on a page, suddenly those people have a place on the screen and are as vital as a source and contributor as the content itself." She explained how HPSN (as it's called) will balance a real-time social experience with a shareable on-demand experience — a big bet that "social can make great TV."

- Surprising factoid from SocialGuide's Sean Casey: "Our data shows that live sports events constitute somewhere between one and three percent of all TV programming, but about 50 percent of all social activity (around TV) is being driven by sports events." Which includes regional sports events, too.

to extend Hangouts to TV broadcasts and everyone else on YouTube, both live and on-demand. In other words, a live streaming service tied to YouTube, not just video chats. "The value that we bring with real-time and hangouts and that interaction is to transform what we think of as entertainment," he said. "Our vision is for everyone on the planet to have access to On Air." For more, Chee spoke with GigaOm after the event. (Click the photo to watch this panel.)

- Shazam's David Jones announced the launch of a new "lightning fast" version of the app. "Literally in as little as one second we can match the content you're hearing," he explained. We gave the new app a try and it's about twice as fast as the old version: some content took 5 seconds to "listen" and identify, others as quickly as a second. This goes a long way to address our earlier concerns about Shazam for TV: that whipping out the app to tag a :30 second commercial is quite the challenge. The new app carves a few precious seconds off the task.

- ConnecTV's Ian Aaron shared some engagement metrics from the second-screen app's first couple months in the wild: 42% of users have liked something, 31% have invited people, 28% participated in polls, 37% have chatted and another 39% go back in the timeline to see something they missed. Aaron says they've surpassed the 1 million check-in mark, and a TV promotion campaign (both in local markets and nationally) is poised to roll out soon.

- TV Plus' AJ Shaw had an interesting pitch for his second-screen platform product. "The important thing to do is to learn and understand what types of engagement work for different content experiences," he said, positioning TVPlus as "a platform to make it cheap and easy" for content creators to experiment quickly in the early-stage social TV industry. Great advice, regardless of platform. 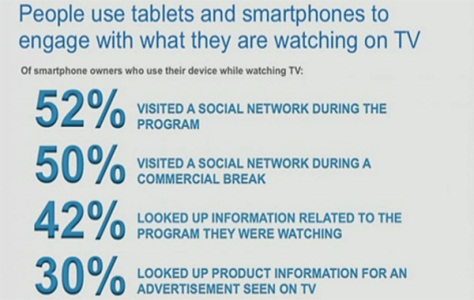 - Deirdre Bannon, VP of Media Analytics at Nielsen, underscored the prevalence of second-screen activity: 9 out of 10 smart phone or tablet users now use their devices while watching television. "It's really mobile that's beginning to fundamentally change how people watch television," she said, showing a slide (above) of what people are doing on their devices while watching. "There's no doubt it's just going to continue to grow." As we've reported before, Bannon said they're working on new research with Twitter to evaluate the connection between social activity and TV ratings, as well as an effort to "get more at the causal relationship." (By the way, to see prior research studies about social TV, click our "research" tab.

- Google Ventures' Joe Kraus offered brutally honest feedback about the space: 70% of social TV startups will disappear or be acqui-hires (company acquired for the talent), 20% will "toil in obscurity" and 10% are "going to be breakout in some way," he predicted. He said there's a saying in the investment community, "We radically overestimate what's possible in short term, radically underestimate what's possible in the long term." Or to put it another way, "Being early is the same as being wrong," offering the advice to "stay lean" and incessantly experiment. Kraus said he sticks to two metrics in determining whether a startup will be successful: 1) growth in one-day active users ("addiction factor") and 2) organic growth in new audience acquisition that naturally comes from using the product. By the way, Google Ventures is an investor in Miso, and Kraus explained how he liked Miso's open platform approach to trying to solve for social TV.

Bluefin Labs — predicts we won't see much consolidation in the social TV space — for now. "Most of these companies are VC-backed," she said. "More often than not, if you get to the end of that round, and you don't have enough traction, you move on to the next thing." (Click the photo to watch this panel.)

- Comcast Ventures' Louis Toth likened social TV startups to blind men touching different parts of the same elephant — they're all trying to solve the same problem from a different perspective. "I think we'll see a coalescing, hopefully, over the next few years over one or two key experiences we can all get around and make money," he said. He said he looks at three things when evaluating a social TV startup: content/experience, audience and defensible technology — and he says he has yet to find all three. The hardest nut to crack, he said, is creating a "compelling experience onto itself" that goes beyond "Twitter feeds" in a second-screen app with compelling content and interaction. Until then, "I think we'll have a tough time breaking out of the discussions we've been having up to this point."