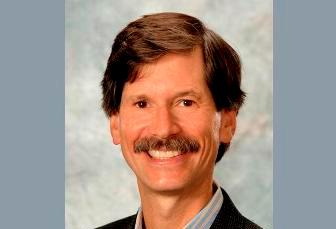 When people consume media together, either in-home or out-of-home, does it help or hurt advertising effectiveness?

The argument that it hurts the advertiser is the "distraction" model, which argues that the presence of other people distracts people from on-screen content, reducing value to the advertiser. This is an argument put forth by Steven Bellman et al. in their 2011 paper "How Coviewing Reduces the Effectiveness of TV Advertising".

The argument that it helps the advertiser is the "social influence" model, which posits that the presence of other people leads to more emotional engagement and the sharing of advertising content, leading to higher ad effectiveness. This is an argument that Brad Fay and I put forth in The Face-to-Face Book, forthcoming from Simon & Schuster/Free Press in May 2012. It was also the topic of a recent paper presented by Brad Fay and Gregg Liebman, Senior VP at Turner Broadcasting, at the recent ARF Re:think 2012 conference.

A representative sample of more than 2,220 males aged 18-54 were studied during the NBA finals, in which they kept track of their word of mouth conversations about brands including the advertised brands. We compared these results with word of mouth levels about the same brands during the off season, the NBA regular season, and the early playoff rounds.

The study showed that co-viewing delivers a clear word of mouth benefit for advertisers by increasing engagement with the ad content. This can be seen in two key sets of data. First, when we looked at the levels of conversation about these top advertisers among men who watched the Eastern Conference Finals in out-of-home settings (work, other people's homes, restaurants/bars, etc – which collectively represented 43% of the total viewership) we found that they are far more likely to talk about the advertised brands – between 1 ½ and 2 times the level of conversation compared to the norm. And when we looked at those who watched in social settings (with friends or acquaintances, whether in-home or out-of home) we found conversations levels about advertised brands were approximately 1 ½ times the norm. So far from being a distraction, co-viewing was associated with greater levels of word of mouth. 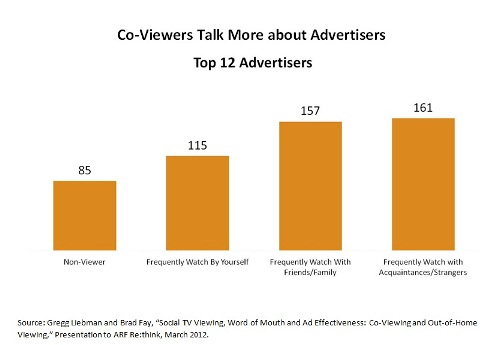 There are a number of important implications from this research. For media buyers, it suggests that co-viewed formats may have higher value than solo-viewed formats. For creative development it suggests the need to design content that will be shared offline as well as online, especially for ads which will be seen in social settings. For programmers, it suggests a new reason to work on developing programs that will appeal to the whole family in order to spur more co-viewing. From a research perspective, we look forward to finding the right opportunity to test these findings further with non-sports programming to see if the same trends hold.