"Star Trek: Strange New Words" Is a Top-Notch Addition to An Iconic Franchise 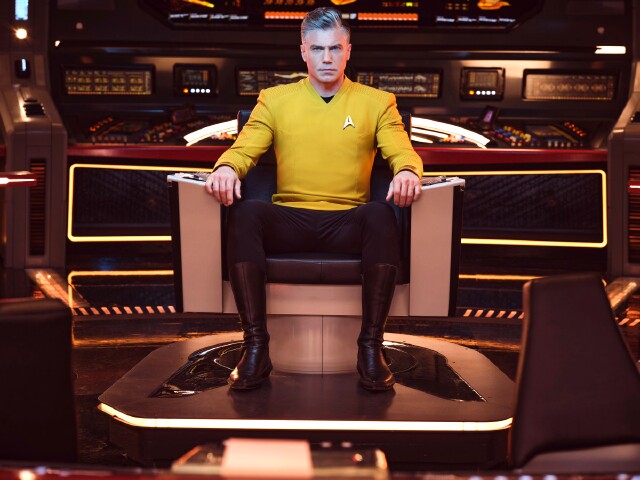 Earlier this month, Paramount+ launched the latest in its ever-expanding Star Trek franchise with Star Trek: Strange New Worlds. Like many of the titles already in the existing Trek universe, Strange New Worlds borrows characters from the Star Trek pantheon, beginning with Captain Christopher Pike (Anson Mount, pictured above), who made his debut in the original Star Trek series, then reemerged in Star Trek Discovery (and Short Treks) before taking the helm of the starship Enterprise. For this new set of adventures, he's accompanied by some familiar names in his crew. As an intermediate Trekkie, I generally give each new installment of the popular franchise a chance, but I have to say, this fast-paced action-packed series, thus far, has delivered in taking this writer where he's boldly never gone before -- having a weekly Star Trek series as appointment viewing.

For me, the main reason is the tone, which strongly resembles that of the original series. According to executive producer Akiva Goldsman, that resemblance is not accidental. "We tried to harken back to some of the values and styles of the original series -- the one that, for those of us who are a little older, ignited our Trek journeys," he explained recently while promoting the series.

"We have tried to look back and interpolate some parts of the original series that might not have made it to the screen [since]," he continued. "Some things that might have happened just before [Capt.] Kirk took over the Enterprise, and as such, some familiar faces are finding new life." 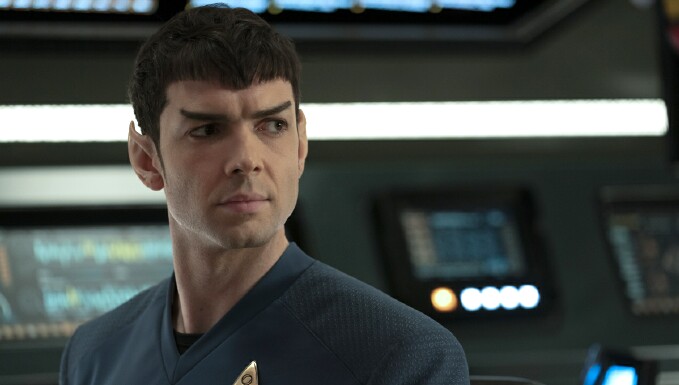 Beyond Pike, two familiar characters from the original series include Science Officer Spock (Ethan Peck, pictured above) and Cadet Nyota Uhura (Celia Rose Gooding), characters originally brought to life by Leonard Nimoy and Nichelle Nichols, respectively. To say that reimagining an iconic pop-culture character like Spock doesn't come easy is an understatement. "There are a lot of challenges," Peck said of the role. "The ears are burdensome in many ways, but I would say in our series, it's finding the balance between his human and emotional sides, human and Vulcan sides, and between his deeper emotional sides and his deeper logical sides. We go much more into his inner life and world, and it feels as though we're treading [new] ground. So, it's a very delicate dance I'm attempting with the wonderful cast and crew we have.

"[Still], there is a box and limitations," he added. "But the more you zoom into the box, the infinitely larger it becomes. In a way, there are boundaries [to playing him], but as we zoom in on him, and his [past] life and experiences we haven't yet seen, we're unfolding our kind of infinite possibilities of him and his life. A lot of it is done in the writing. I get a new script, and I'm faced with something totally unfamiliar to me in my work as Spock. So, the sky is kind of the limit, in my opinion, but there are rules." 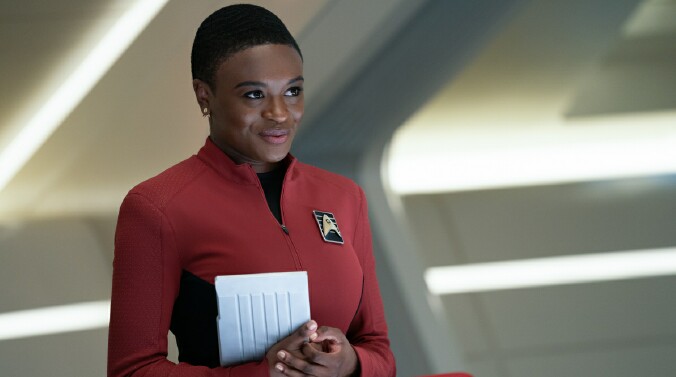 The importance of reimagining Uhura, one of television's truly groundbreaking characters when it comes to diversity and inclusion, is not lost on Gooding (pictured above). "I think there are so many incredible things that Nichelle brought to this character," she shared. "She brought a level of brilliance and grace and I think that's what made her character so iconic. She was one of the first Black women in television not playing a role of service or servitude, and she was just effortlessly brilliant, capable and powerful. I was very excited to have an opportunity, as a young Black woman constantly looking for representation of herself in media, to bring that.

"I'm also excited to, sort of, introduce a side of unsureness and uncertainty [to her], especially for this first season," she continued. "I think something Nichelle had with the original Uhura was a level of understanding and clarity. Having an opportunity to represent such an iconic character in a multifaceted way is an honor for me as an actor. It's also exciting to hear what other people think of it, and to see the other sides of Uhura that we didn't see because of the limitations for Black women in film in the '60s."

Mount is no stranger to the world of genre entertainment, having appeared in both the Marvel (Dr. Strange) and Star Trek universes. However, sitting in the USS Enterprise captain's chair was beyond his wildest dreams. "There was something about Star Trek that was far off the radar for me," he said. "It wasn't even on my bucket list, and I never thought I'd end up captaining the Enterprise. Every single day I'm on set, it's both disbelief and a feeling of tremendous gratitude. I think having a healthy dose of humility and appreciation are [also] the greatest qualities in Captain Pike. If I can live up to him at all, it's through my appreciation of being a part of this universe."

Being accepted by the legion of Star Trek fans doesn't hurt either. "The fan reaction has been unlike anything I've experienced in my career," he smiled in closing. "It's like being an actor and trying to judge your own work, and it's impossible to judge sometimes. Getting that kind of feedback is both surprising and deeply encouraging."