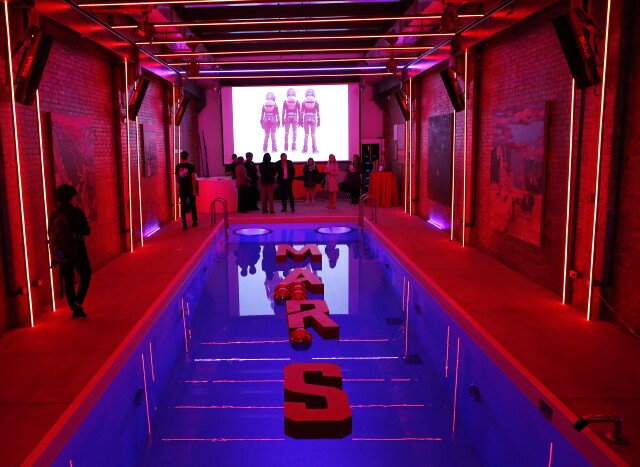 Celebrating the launch of the second season of Mars, its hybrid series mixing documentary and scripted material to explore what living on the planet would be like, National Geographic last Thursday took over a posh townhouse in Soho.  Red light, intended to reflect the planet’s iron-rich surface, cast a forgiving glow over all.  Guests could slip into virtual reality headgear affording 360-degree views of the sprawling set in Budapest.  They could also sip Martian Sunrises, a cocktail of blue Curaçao and juices (sunsets on Mars are blue), while standing around an Olympic-length pool featuring red foam letters spelling out M-A-R-S (pictured above).  There, former NASA astronauts Leland Melvin and Dr. Mae Jemison, featured in the series, chatted with Nat Geo executives and the press.

“I like to pretend it’s the Nat Geo House,” Courteney Monroe, CEO, National Geographic Global Networks, said of the building (Heidi Klum’s former digs), several floors high.  (The pool is on the second level.)  Monroe welcomed Ron Howard (pictured below), Mars’ executive producer and co-founder of Imagine; showrunner Dee Johnson and members of her team, scientists and actors from the cast.  She explained how this series exemplified the rebranding of National Geographic with its philosophy of “further.” 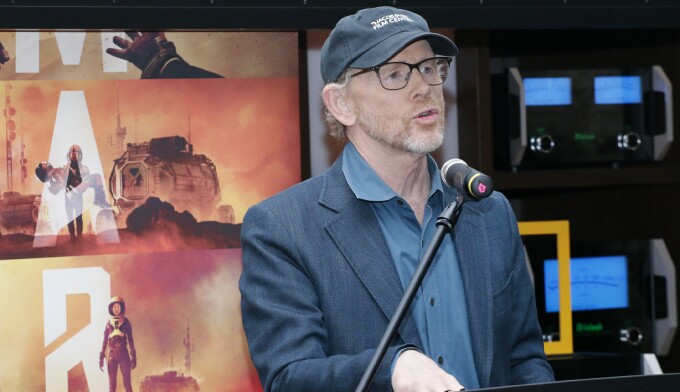 “With series like Marsand others like it, we are demonstrating how you can take a revered, iconic brand and through innovation and creatively ambitious storytelling inject it with renewed relevance,” Monroe said.  “Since launching this new premium strategy, we have had our four most viewed series in network history, including season one of Mars.  We have garnered more critical acclaim and awards recognition than ever before, including at the Emmy ceremonies last month, when we won three awards for cinematography -- the most any network has won in a single year.”  (Monroe first talked with MediaVillage about Mars in May, 2016 during this Lunch at Michael's with Jack Myers and Ed Martin.)

Season 2 of Mars, bowing on Nov. 12, concentrates on the challenges of living life on the inhospitable planet.  Last year, it was all about getting there.  This year, it’s all about survival, which allows for more drama.  The overall thrust of the series, though, is that the network dared to go someplace new, Howard noted.

“There is no such thing as innovation without experimentation,” Howard told the crowd.  “These things don’t go in the same sentence with the network executives I’ve ever been around.  Courteney and Nat Geo understood it.  Brian Grazer and I have always been intent on taking on arduous adventures.”

As he watched footage of a documentary segment featuring former Speaker of the House Newt Gingrich (R-GA) deride environmental concerns over profit, Howard could not help but react.

“It is always a push-pull because innovation leads to changes and it is going to have an impact on society and the ecology,” he told MediaVillage.  “It seems to me like if we are going to exploit it, why bother if it has a negative impact on the planet?“

This season examines some of the potential impacts of human colonization on Mars, especially if people repeat the mistakes made on Earth.  That is where some of the drama will arise. Regardless of personal relationships and larger intergalactic concerns, any people on Mars will have to eat.  For that all-important question about how they will subsist, former NASA dietitian and President of the Institute of Food Technologists Michele H. Perchonok addressed the matter at the luncheon.

She reckoned it would require over 24,000 pounds of packaged food for a crew of six on Mars.  The shelf life would need to be a few years since it takes roughly seven months to travel each way and the return trip would need to be about 24 months after arrival to synch up the ideal time to fly. 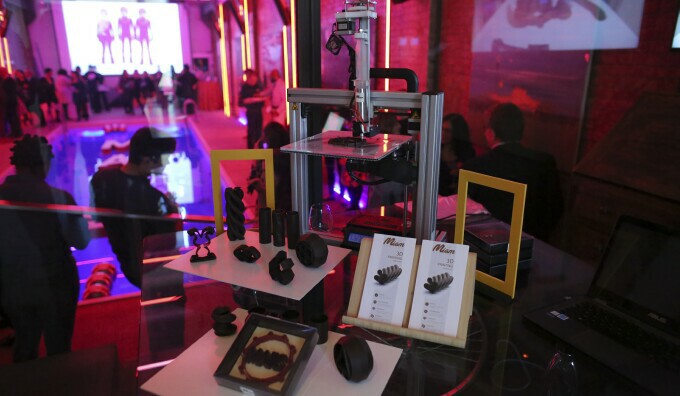 As sci-fi as it sounds, she mentioned that 3-D printers could be employed to make food.  In the Nat Geo House, a 3-D printer was being used to create MARS chocolate (photo above), which some might argue is not life sustaining.  Were people living on the fourth planet from the sun, though, they would require variety or might become too bored with meals, and not eat enough, she said.

Produce could be grown hydroponically, and Perchonok figured cherry tomatoes, onions, strawberries, radishes and potatoes would be grown.  Remember potatoes have many uses, including being fermented into vodka.  Perhaps those cocktails wouldn’t be blue but on the red planet, while enjoying a blue sunset, more color might not be needed.