Steve Lund on Just How Chilly It Was Filming Hallmark Channel's "Baby, It’s Cold Inside" 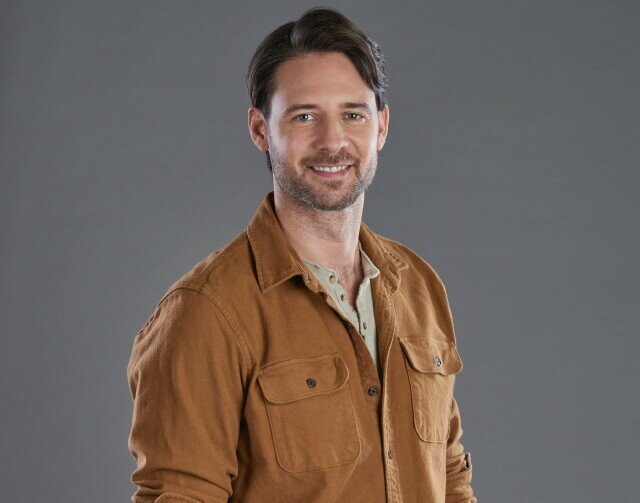 After starring in a string of Christmas-themed movies for Hallmark Channel and Hallmark Movies & Mysteries, to viewers it would appear actor Steve Lund (pictured above) might be used to working in the cold. The actor, who grew up in Canada playing hockey, is used to chilly conditions, but nothing prepared him for his latest Hallmark Channel premiere Baby, It’s Cold Inside opposite Jocelyn Hudon. It was filmed on the outskirts of Quebec at the Hôtel de Glace (pictured below), which is constructed completely of ice. “Oh, my goodness yes, this was a truly cold experience,” he laughed during an exclusive chat with MediaVillage. “It was the coldest I've ever been, like to my core. Like the kind of cold where you need to take a hot bath at the end of the day … no matter what time it was, just to regulate your temperature.

"It was like negative 20 Celsius, so cold that we needed to have electric socks and undergarments," he continued. "In-between takes we were running indoors to find warm refuge anywhere and thaw our lips before going out and trying to deliver an emotional line so that our faces wouldn't freeze. It was a truly, truly, frigid time.”

That’s a far cry from Lund’s previous Hallmark adventures like Christmas Incorporated (2015) and Best Christmas Party Ever(2020). “I've done ‘Christmas as Christmas’ movies shot in July, trying to be December,” he explained. “[Because] it’s July, we’re usually in the middle of a heatwave. So, we're wearing pea coats, scarves and mittens. It's equally as difficult to try to act when you can feel a steady stream of sweat rolling down your back, but this movie was a new type of cold.”

Lund stars as Ben, the designer of The Ice Hotel -- a dazzling, detailed multi-room ice palace designed as both a hotel and art installation -- who finds himself entertaining travel agent Hanna (Hudon) during her "reluctant" stay. As the two make the most of the less than cozy surroundings, Hanna becomes enthralled with the hotel, and with Ben, who offers her the opportunity of a lifetime. While the shoot itself might sound challenging, Lund assured me there were positives. 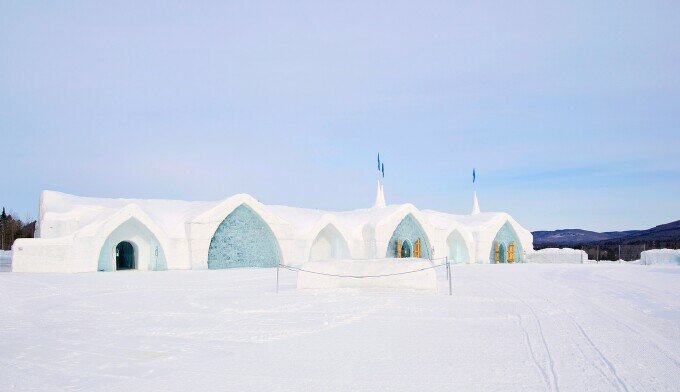 “I was totally blown away by the detail of the hotel,” he recalled. “Each room is different and there's like something like 30 rooms, maybe more than that. At first, I only saw the original structure, then low and behold, beyond that there are many others. So much has gone into it. The craftsmanship, the dedication to the vision to conceive of something like that when you're just staring at a block of ice is miraculous. There were rooms covered with dragons and gargoyle-type characters, but those didn’t really suit the vibe of the film, so we stayed away from them. I wish that people could have seen the rooms. They were incredible.

“Initially I thought, ‘It’s going to be hard to fake that I was the one responsible for designing and building this’ because I hadn’t the faintest clue as to going about doing it," he added. "It was very humbling to see all that work and know for certain that I would never be able to create something like that, so that required a little bit of acting.” 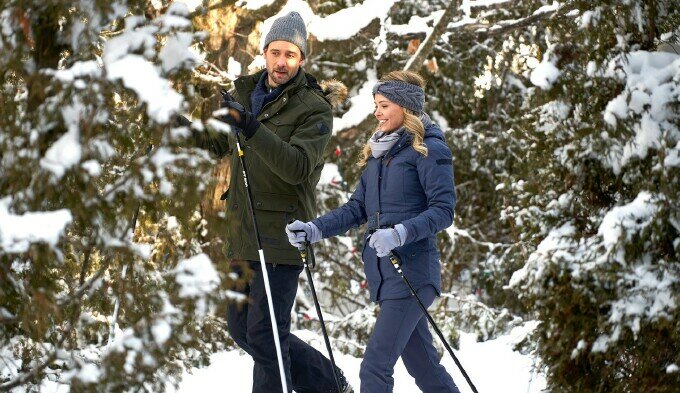 Of his time with Hallmark, Lund declared, “I’ve been very fortunate to work with wonderful people I've instantly gotten along with, like Taylor Cole in Unlocking Christmas (2020), with whom I had a blast.” His Baby, It’s Cold Inside co-star was no exception. “Jocelyn Hudon (pictured above right) is an entirely different animal,” he said. “She's so much fun and such a special person. I loved working with her. Every day I was busting my gut laughing. She's fiercely talented, and it was amazing to watch her work. She had this quiet intensity and professionalism that she balanced seamlessly with being so kind to everybody and having time for everybody. I can't say enough great things about her.”

In a career that has afforded him a variety of memorable roles, Lund tells me it’s his Hallmark movies people usually recall him for, even by friends he wouldn’t normally peg as #Hallmarkies. However, of late it’s his recurring role as the relationship-adventurous Jake in the critically acclaimed (and recently syndicated) series Schitt’s Creek that’s bringing him considerable attention. “You know it's a point of pride as a Canadian to have been on that show,” he said of the much-honored series. “Even though my part was relatively small, it's a storyline that people gravitated towards and a character that people loved as he was sort of aloof and fluid. I assume I'll be getting more people coming up to me saying, “Hey, I think that's you, but I only would recognize you in your towel.”

Since work resumed following the COVID lockdown, Lund has kept busy. He has a few projects in the can, and a few on the boil. He’d be open to another ice hotel sojourn with Hudon, should there be a sequel, and has his fingers crossed for another Christmas film. However, he did have one final plea to Hallmark when it comes to his next romantic outing. “I've cut my teeth, I’ve put my time in, and I love Hallmark,” he laughed in closing. "But hey, throw me a bone and cast me in a movie that takes place in Bora Bora, the Cayman Islands, or something tropical. I think they owe it to me at this point.”

Baby, It’s Cold Inside will premiere Saturday, May 8 at 8 p.m. on Hallmark Channel.