Stuart Elliott: And the Winner Is ... Academy Award Ads 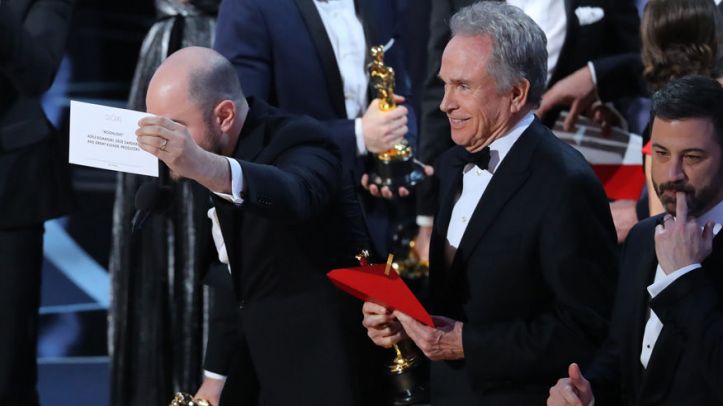 As the 89th annual Academy Awards was concluding, advertisers in the telecast seemed to be in a good place. There'd been an entertaining mix of jokes, songs and political remarks. Jimmy Kimmel was deftly handling his first Oscars hosting gig. Without elaborate, irrelevant production numbers, the show was moving along. And honors in 10 major categories had gone to the expected winners, so perhaps viewers were paying more attention to the commercials than usual.

Then, of course, the clock struck midnight, the Best Picture category spun out of control and the Cinderella sponsors turned back into scullery maids. Like Super Bowl LI on Feb. 5, an unbelievable finish threatened to overshadow the ads.

The words from a commercial for a new Oscars advertiser, the New York Times, had proved weirdly prophetic. "The truth is hard," the spot proclaimed. "The truth is more important now than ever." Oh, PricewaterhouseCoopers, as the New York Daily News laments Monday on its front page, "You Had One Job!"

When advertisers buy commercial time during big, live television events, they're hoping the up side -- large audiences watching in real time, not zipping through, or zapping the spots -- will outweigh the potential down side of being overtaken by events. With Super Bowl LI, the incredible comeback of the New England Patriots overwhelmed the chatter about the commercials. With Super Bowl XLVII in 2013, a lengthy blackout at the Superdome upended the running order of the ads and enabled an interloper, Oreo, to steal the show with a clever tweet.

Maybe the fact that all the commercials had run as scheduled Sunday before the Best Picture mix-up will mitigate its impact. Also, it may help that, as is true in most years, the ads during the Academy Awards outshone their Super Bowl counterparts.

Take, for instance, that Times commercial. It was somewhat generic, in that a number of respected media outlets are starting to promote their devotion to real news. And there was no call to action such as a web address or a subscription offer. Still, the spot quietly and simply made its important point, which was underlined later by the need to know which movie actually had won Best Picture.

The Times also was lucky, buying the spot before an uproar on Friday over its being barred from a White House press briefing. And the critic in chief, President Trump, worked on behalf of the paper by shining a spotlight on the ad before it ran, condemning it in a nasty tweet: "For first time the failing @nytimes will take an ad (a bad one) to help save its failing reputation. Try reporting accurately & fairly!"

Hey, Mr. President, if you're going to do my job, can't I do yours? I couldn't do any worse.

The Oscars briefly even became a paean to mainstream media when AARP used its commercial time to tout a membership benefit, AARP The Magazine. Hooray for legacy print! All that was missing was a spot for a book publisher; after the Best Picture debacle, why not "Accounting for Dummies"?

There were many other Oscars commercials that took their cues from the present state of the union, just as there had been during Super Bowl LI. Several of them were excellent, such as a spot for Hyatt Worldwide that carries the theme "For a world of understanding" and is set to a contemporary version of "What the World Needs Now." In a nifty bit of timing, the Hyatt commercial ran right after the Times commercial in a kind of one-two punch for doing the right thing.

Another gem was a commercial for Revlon styled like a public service announcement, which was devoted to an initiative called the Love Project. Ellen DeGeneres, Lady Gaga and Pharrell Williams offered pleasing, upbeat pronouncements: "Love is embracing everything you are," "Love is why we're here," "Love is accepting."

Cadillac tried something similar with a spot featuring scenes of protests and demonstrations, in which an announcer acknowledges, "We are a nation divided" Alas, it went awry when he asserts, "But what they don't tell you, what doesn't make the news is this: We carry each other forward." That's illustrated with viral clips we've all seen a million times before of rescues, reunions, and nice signs ("Free hugs").

The conclusion -- "We can be one. And all it takes is the willingness to dare" -- was muddled because it riffs off the Cadillac brand theme, "Dare greatly." Good thing Cadillac doesn't use the Chevrolet brand theme, "Find new roads," or the commercial would've told us to solve our divisions by moving to Canada.

Among the advertisers not addressing today's political climate, Walmart, a first-time Oscars sponsor, tried something ambitious with a series of commercials from movie directors based on the same receipt from a trip to a Walmart store. Though they all borrowed too much from familiar films, the third one, "Banana Town," by Seth Rogan and Evan Goldberg, was the most clever.

There were other spots with cinematic roots and themes, because, well, why not? It's the Oscars. Rolex offered up a striking commercial composed of scenes from movies in which cast members wear Rolex watches. (Among them, Bill Paxton, whose death was announced Sunday, and Faye Dunaway, who announced La La Land as Best Picture.) AT&T reran a recent spot in which a customer re-enacts scenes from famous films and TV shows.

E! showed a commercial for an upcoming series, The Arrangement, with a lead character said to be based on Tom Cruise. FX pitched its upcoming series, Feud: Bette and Joan, based on the battles between Bette Davis and Joan Crawford on the set of the 1962 movie Whatever Happened to Baby Jane? And Google sponsored a spot celebrating the role played by Google Maps in the plot of another Best Picture nominee, Lion.

"Search on," the Google spot concluded. And so, the Academy searched until it found who really won Best Picture.