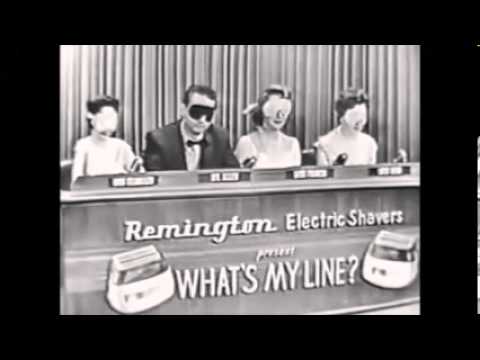 We're well into the Upfronts, as the major TV networks are wooing advertisers with sneak peeks of their schedules for the 2016-17 season. Once again, there's a focus on new ways of reaching consumers as traditional commercials, which interrupt the programming that viewers want to watch, become less and less effective.

There's lots of talk this week about potential solutions, replete with industry jargon such as branded content, creative partnerships, integrated marketing and native solutions. In looking for answers to modern-day problems, Madison Avenue would do well to look back into the past -- and fortunately, there's now an opportunity to do just that.

To me, the gems of the Buzzr lineup are two blocks of golden oldie game shows, originally created by Goodson-Todman Productions and broadcast in black and white by CBS. The shows, usually on Buzzr from 2 to 4 p.m. and 2 to 6 a.m. (ET), are "To Tell the Truth," "What's My Line?" and "I've Got a Secret."

What makes the series so relevant to those toiling in the industry nowadays is that Buzzr runs each show for 40 minutes instead of sticking to the usual 30-minute time slot. That enables Buzzr to include the original commercials from each episode -- yes, the actual ads that audiences saw 50 or 60 years ago -- as well as selling spots to present-day advertisers.

The GSN cable channel has presented those same shows in a programming hour dubbed "Black and White Overnight," but shorn of the original commercials to fit the episodes into 30-minute time slots. Such scissoring happens almost every time that bygone shows are brought back, as was the case in September when TCM revived six and a half hours of live TV dramas from the early 1950s featuring James Dean.

Why are the original commercials still embedded in the kinescopes or tapes of the series that Buzzr is resurrecting? It's because the advertisers were not just buying commercial time in each episode; they were sponsors.

Sponsorship was a rarefied status back in the day, meaning that advertisers and their agencies had major input into and control over the series to the point where in many instances they owned the programming. It's a far cry from the contemporary practice of selling a show by carving up the commercial time into multiple -- and seemingly endless --15-second or 30-second spots.

There wasn't a need for so many spots back then, with a single sponsor paying the freight, so as is demonstrated by the Buzzr reruns there were just three or four commercials per episode. A sponsor received special billing at the start of a show: "Brought to you by ..." If two advertisers shared a sponsorship, there'd be a shout-out at the end of an episode along the lines of, "And now a word from our alternate sponsor."

Sponsorship often came with a perk known as cast commercials, meaning that the cast members of the series would deliver or take part in the spots. That's demonstrated in the Buzzr reruns as when, during episodes of "I've Got a Secret" from 1961 and 1962, the host, Garry Moore, and panelists such as Henry Morgan participated in demonstrations of "the new Polaroid 10-second Automatic camera."

Another benefit of sponsorship was a right to weave products into the programming, making them intrinsic aspects of each episode. For instance, sponsors of the classic game shows on Buzzr festooned the sets with brand logos, images and other plugs.

In episodes of "What's My Line?" from the mid-1950s, the desk behind which the panelists sat, the blackboard on which guests signed their names and flip cards indicating how much money the guests won promoted products made by two sponsors: Remington Rand, peddling the Remington electric shaver, (watch the video at top) and Jules Montenier Inc., hawking Stopette deodorant ("Poof! There goes perspiration") and Finesse shampoo. (The modern Finesse hair-care brand traces its roots to that Finesse.)

And in episodes of "To Tell the Truth" from 1961, the host, Bud Collyer, told departing guests they would receive "a gift package of fine products from the makers of Anacin" -- i.e., American Home Products, a conglomerate of prosaic brands that also owned pantry and medicine chest staples such as Aerowax, BiSoDol, Dristan, Heet, Sani-Flush and Sleep-Eze ("the next thing you know, it's morning").

The next thing you know, it's decades later, and sponsorships are coming back into vogue as a method to reduce clutter and make commercials more palatable by making them less annoying. For example, Facebook is joining with DigitasLBi to create "a brand-friendly live morning show."

And a new competitive video gaming initiative, ELEAGUE, from Turner and WME/IMG, has signed three brands -- Arby's, Buffalo Wild Wings and Credit Karma -- as "official marketing partners" for its first two seasons. Among the back-to-the-future benefits being promised to the brands, according to a Turner news release, are "customized, contextual brand exposure" and "sponsor integration." Viewers will get something valuable, too: "limited commercial time."

There's also a renewed interest in game shows, as evidenced by ABC's decision to introduce, starting June 26, "Sunday Fun & Games," a prime-time block of rebooted versions of "Celebrity Family Feud," "The $100,000 Pyramid" and "Match Game." They'll join a revival of "To Tell the Truth," slated for Tuesday nights, starting June 14.

There's a good chance, it seems, that the tried-and-true tactics once used to peddle products, as demonstrated daily on Buzzr, could again be winnrs.