Stuart Elliott: At McDonald's, Those Arches Aren't So Golden 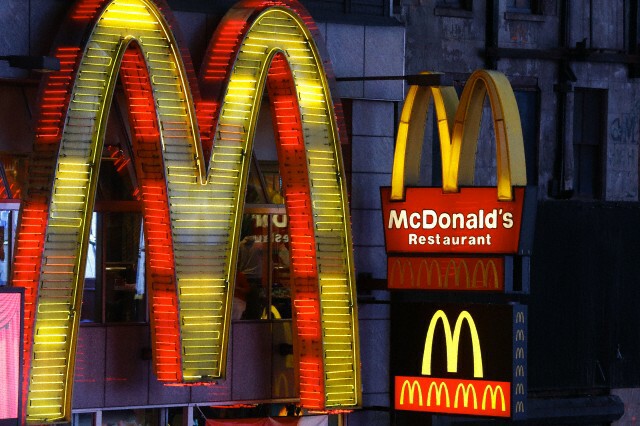 The passersby on Broadway near West 82nd Street pause at a storefront that was shuttered suddenly. "Sorry we are closed," read the signs taped to the windows, which ask customers to "please visit our nearest locations" elsewhere on Broadway. It's not an unusual sight, especially these days, when high rents are forcing out lots of neighborhood businesses. But in this instance, the identity of the former occupant is causing those pedestrians to do double takes: McDonald's.

OK, so it's not as dramatic as that moment in "Citizen Kane" when a stern-voiced newsreel announcer, delivering his chronology of Charles Foster Kane's colorful life, mournfully intones, "Then, in the first year of the Great Depression, a Kane paper closes." Besides, executives at McDonald's previously had disclosed plans to close 700 underperforming outlets this year in the United States, China and Japan.

But statistics are abstract until it's your own local McDonald's that goes under, especially when you can't recall a time in your adult life when the fast-food chain wasn't in perpetual growth mode. In fact, the Associated Press reported last month, if McDonald's closes more American restaurants than it opens this year it would be the first such shrinkage since at least 1970 -- or possibly ever.

The store closings are part of turnaround plans with a goal at their heart of transforming McDonald's into what the new president and chief executive officer, Steve Easterbrook, calls "a modern, progressive burger company." In the company's 2014 annual report, he pledged "bigger, bolder actions to connect more deeply with consumers and improve critical aspects of our business." There are changes on tap in key operational areas, among them simplifying the menu, improving the taste of the food and restoring a sense that eating at McDonald's provides value for money. There's a test underway of a delivery service in New York and, in other markets, tests of offering popular breakfast items all day. And with new global chief marketing and communications officers coming in, there will be shifts in advertising and public relations.

Some moves already have been made, eliciting mixed reactions. A return of the 1970s Hamburglar character as a hip dad was cheered and jeered. It took a while for McDonald's to bring to the United States, its largest market, a successful campaign in Canada devoted to answering consumers' questions about its fare.

And Adweek applauded as "pretty cool" an initiative in some markets to introduce innovative takeout packaging for bicyclists. But when I posted the article on Twitter one of my followers wrote, "You know your #food company is in trouble when the best part about the food you serve is the box it comes in."

There's just a pervasive sense that McDonald's is behind the curve in so many ways: lagging competitors such as Shake Shack and Five Guys in the quality and appeal of its mainstay hamburgers; failing to match fast-casual restaurants such as Chipotle and Panera in eliminating preservatives or artificial colors and ingredients from its food; and not moving quickly enough to respond to complaints about how poorly employees are paid.

It's possible that in fast food, unlike on Wall Street, there's no such thing as “too big to fail.” Just as McDonald's helped force out of business dining staples like Howard Johnson's, it might be in the early stages of a systemic decline. But Madison Avenue loves a challenge, so there still may be steps to take to wipe the tarnish off the Golden Arches.

Why doesn't the McDonald's marketing brain trust turn to crowdsourcing, asking the brand's biggest fans for ideas to revive its flagging fortunes? The most imaginative suggestions could be put up for a national vote and the winners phased in at restaurants around the country.

Another approach: mea culpa marketing, which worked so wonderfully for Domino's when its pizza was derided as subpar. McDonald's similarly could apologize for losing its way and promise to improve. (Of course, it would have to deliver on those promises or all is lost.)

McDonald's might even borrow another page from the Domino's playbook and adopt a new name to underline its new course. Just as "Domino's Pizza" became "Domino's," so "McDonald's" could become "Mickey D's" or "McD's." There is some precedent in other countries; the company has embraced nicknames in Australia, Macca's, and in France, McDo.

If everything else fails, McDonald's could try a so-bad-it's-good positioning. There may well be a market for that, as evidenced by the huge buzz recently generated in social media by a blogger's creation, a deep-fried Big Mac on a stick.