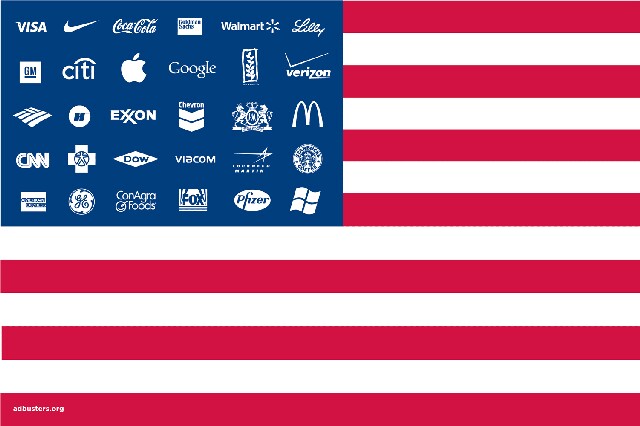 In 2002, Adbusters, the activists who oppose the commercialization of culture, introduced what they called the corporate America flag, with the stars replaced by logos for ubiquitous, dominant brands such as Apple, Bank of America, Coca-Cola, General Electric, Goldman Sachs, McDonald's, Nike, Philip Morris, Starbucks and Walmart. At the time, it seemed like artful agitprop, but given what's happened since then -- and especially the wild and wacky goings-on the past year -- I've come to believe it was prophetic ... though not quite in the manner the anti-ad crowd had hoped.

American politics increasingly has become branded and brand-centric in a way that defies tradition. A lot of it, of course, has to do with Donald Trump's run for the Republican nomination, which has injected the phrase "the Trump brand" into electoral discourse. Not long after he announced his candidacy, with remarks that attacked Mexicans, mainstream marketers and media brands that did business with Trump -- among them Macy's, NBC, Perfumania, PVH, Serta and Televisa -- cut their ties to his brand, undercutting his image as a master salesman.

The focus on Trump as brand rather than Trump as candidate reached its high -- or low -- point on March 8, when Trump held an event that was more an infomercial than a victory speech. Standing near a display table stocked with Trump-branded goods, he vigorously refuted reports casting doubt on the commercial viability of products bearing his name such as Trump magazine, Trump Steaks, Trump Water and Trump wines.

President Obama subsequently mocked Trump's merchandise moment as "selling stuff like it's the Home Shopping Network." Obama also declared that the violence at Trump rallies threatened to tarnish "the American brand" around the world.

The ability of Trump's brand to help him overcome his GOP rivals has produced intense discussion of his effects on "the Republican brand" in the primaries as well as the general election. The consensus: The Trump brand likely will assist the bombastic billionaire in securing the nomination, only to cost him the Presidency in the general election -- and perhaps the party's control of the House and/or the Senate.

Brands have become so intrinsic to this campaign that we may need to coin a word to describe what's taking place: brandification? brandizing? How about brandomania, with a photo of Marlon Brando wearing a torn undershirt bedecked with the Adbusters flag? Take, for instance, an article that ran on the front page of the New York Times last week under the headline "Brand Names Under Pressure to Sit Out GOP Convention."

The article recounted how major corporations such as Apple, AT&T, Coca-Cola, Google and Walmart are being urged to steer clear of offering sponsorship support to the Republican National Convention in Cleveland. Such financial backing has been extended routinely for decades to the quadrennial gatherings of both parties, but the likelihood of Trump's becoming the nominee -- and the possibility of violent protests -- is leading marketers to think twice about participation.

The article's focus was the dilemma confronting marketers, anxious of offending Trump's supporters by seeming to shun him or offending Trump's opponents by seeming to back him. That queasy feeling earned a branded shout-out in the article from Bruce Haynes, a public relations consultant. "These are Maalox months for everyone," he said, evoking the vintage "Maalox moment" slogan for the antacid brand.

Though brands may be pondering a path to inoffensiveness when it comes to Trump on the national level, many are taking a different tack regarding discriminatory legislation on the state level. Opposition to biased bills and laws in states like Georgia, Indiana, North Carolina and South Dakota -- from big-name brands in realms like entertainment, packaged goods, transportation and technology -- is a growing trend.

An article in Time, titled "Why more companies are coming out of the political closet," cites brands such as Bank of America, Coca-Cola, Delta Air Lines, Walt Disney and Wells Fargo. Among the brands name-checked in the Times, in a spate of articles, columns and editorials on the subject, are American Airlines, Apple, Dow Chemical, Facebook, Hanesbrands, Intel, PayPal, Red Hat, Salesforce.com and Unilever.

It wasn't that long ago when big brands would shy from taking stands on contentious issues, particularly those involving LGBT rights. The Supreme Court's decision on marriage has liberated them, along with survey data showing the overwhelming support for progressive policies among younger Americans -- not only the most desirable marketing demographic, but also the group providing firms with their talented employees for the future.

It's almost as if for every regressive or repressive Republican legislature or governor, there's now a forward-thinking brand or two pushing for equality and acceptance. That's undoubtedly something the Adbusters, in their dismissal of brands as symbols of the excesses of capitalism, never expected. And it's fascinating to note that so many of the brands taking stands are included on the Adbusters flag.

That's not to say brands are always going to do the right thing -- the profit motive still is their principal reason for being -- but purpose-driven brand activism is a welcome counterweight to politicians who want to turn back the clock. And don't be surprised if the clock bears a brand name.