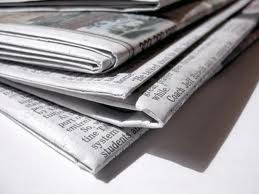 I was going to begin this look at the future of print media with the question "Whither print?" -- as in, what place for print in a digital age -- but changed my mind because it would be easy for readers to confuse the phrase with "Wither print?"

It's been a particularly tough few weeks for print, a medium that, let's face it, has been under pressure for quite some time. Newspapers both old -- the Tampa Tribune, founded in 1893 -- and new -- the New Day, founded 10 weeks ago -- were shuttered. Tribune Publishing and Gannett are embroiled in a nasty battle as the latter fights to take over the former; the dispute has given reporters a chance to rehash the foul-ups, missteps and blunders that have made the struggling Tribune the epitome of how far the mighty print media has fallen.

The New York Times made plans to close some operations in Paris that traced their roots back to 1887. And a Cincinnati TV station, WCPO, started a snarky campaign to persuade readers of the Cincinnati Enquirer to "drop the paper" in favor of the station's digital content.

It's reached a point that Zoe Harris, group marketing director of Trinity Mirror, the British publishing giant behind the New Day, wondered whether "there is a sense of 'printism' at play in the way that people are talking down about print more than they need to," which, she fears, is hindering efforts to find innovative ways to keep print relevant.

"There are still millions of people going out of their way to buy a print title every day," Harris told the trade publication the Drum. "This sense that it is all over for print is really unfair on all of the print titles."

Despite the gloom and doom, print is trying to bounce back. Four of America's biggest newspaper companies have formed Nucleus Marketing Solutions, a consortium meant to help bring together national advertisers and local shoppers. The Times is seeking non-traditional sources of revenue, teaming up, for instance, with a firm called Chef'd for meal kit delivery.

Hearst has revived a fondly-recalled magazine, Metropolitan Home, and has signed agreements with a lengthy list of partners, including the actress Elizabeth Banks, centered on WhoHaha.com, her new comedy website; Facebook Live; Snapchat; and the actor Channing Tatum, for his upcoming "Magic Mike Live" show in Las Vegas.

Hearst announced those partnerships last Wednesday during its first-ever presentation as part of the annual Digital Content NewFronts, sponsored by the Interactive Advertising Bureau. Seven of the 39 NewFronts presentations, scheduled from May 2 through 13, are being hosted by legacy print media companies; among them, in addition to Hearst and the Times, are the Economist, National Geographic and Playboy.

The Hearst presentation was first-rate, with a surprise appearance by Tatum; a performance by a young London MC named Elf Kid; lobster sandwiches, served from food bikes, and a pair of donut walls, each outfitted with pegs holding 196 of the tasty desserts.

It also took 45 minutes for the word "print" to be uttered, when Michael A. Clinton, president for marketing and publishing director of Hearst Magazines, took the stage toward the end of the presentation. "You saw some 15 great new concepts," he told the audience. "And yes, even print can work."

The paucity of print references is not entirely startling, because the IAB requires that a company presenting at the NewFronts "must create original content in video format that is available online." In other words, if your roots are in magazines or newspapers, your NewFronts event has to concentrate on your digital offerings.

Fine, say most legacy print firms, which are scrambling to remake themselves for digital-first consumers. They're eager to showcase how much they're changing and how far they've come. Thus, the host of the Hearst presentation, billed as a NewFront House Party, was Hearst Magazines Digital Media rather than Hearst Magazines.

"Print is a very key business for us, today, tomorrow, 25 years from now," David Carey, president of Hearst Magazines, said to me after the presentation, which he attended but didn't take part in.

"The digital Upfront market," with its emphasis on video, and the print ad market, with its "print-centric ideas," are "really different markets," he added.

Hearst is making plans to stage in the fall its fourth annual MagFront, an event devoted to innovative print ad ideas, Clinton told me after the presentation.

"We're the only ones who do a MagFront," he added. "The NewFronts market is video only; at the MagFront, the ideas come from our editors."

It's unrealistic to expect publishers with roots in print to wave banners festooned with the p-word during the NewFronts. What I'd like is for them to be more assertive on this point: Advertisers ought to consider doing business with them, instead of their new media rivals, because of the expertise in understanding and delivering what readers and advertisers want that was built up during decades of publishing successful newspapers and magazines.

In other words, don't ignore or run from your print past; embrace it.