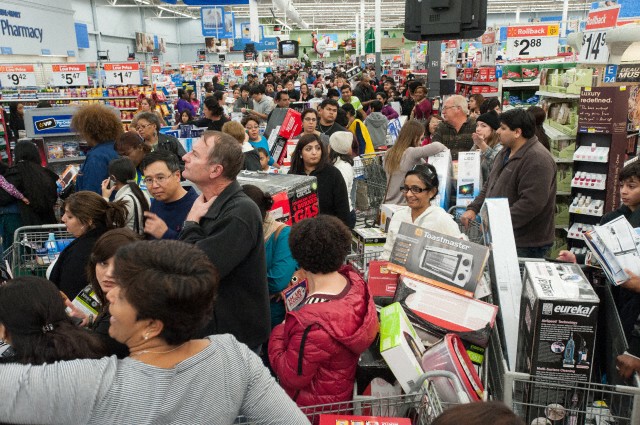 Among my favorite movies about advertising is the 1940 screwball comedy "Christmas in July," which mocks one of Madison Avenue's most popular consumer come-ons, the slogan-writing contest. The plot is centered on an ambitious young clerk whose co-workers trick him into believing he's won a $25,000 prize, back in the day when that was real money.

Seventy-five years later, it's the concept of Christmas in July that's the lure as stores, online and actual, bash each other's brains out in a spate of midsummer madness. It's another sign of the intensifying pressure in the retail sector brought on by a combination of factors that include slowing growth, demographic shifts and the impact of e-commerce on brick-and-mortar chains.

The brouhaha began on July 6 when Amazon announced a gimmick to promote its Prime membership plan: A new one-day sales event, Prime Day, promising shoppers who visited amazon.com on July 15 "more deals than Black Friday." Walmart -- working for years to turn walmart.com into a worthy challenger to amazon.com -- swiftly scheduled its own sales event for the same day, asserting that its "thousands of great deals" would outdo Prime Day because they would be "at or lower than Amazon's prices" and wouldn't require paying Amazon Prime's $99 annual membership fee.

By the time Prime Day rolled around, the flood gates had opened. Best Buy and Target reminded everyone that their annual "Black Friday in July" sales predated the mid-July skirmishing between Amazon and Walmart. Macy's provided free shipping on almost all orders on macys.com on July 15, which was designated "Surprise Specials Day!" (It wouldn't have been a surprise, presumably, without the exclamation point.) Other retailers appropriated Amazon's moniker in emails to customers: Old Navy offered "Prime-time deals," while Bloomingdale's proclaimed, "It's Prime Time to shop: Take up to 30% off now!"

The one-upmanship didn't end when Prime Day did. The next day brought the "Big Bonu$ Sale" at JCPenney and jpc.com. On Saturday, Walmart was still at it, sending emails that trumpeted, "No 1-day sales here," and teased, "We're primed to keep the savings coming!" And Macy's advertised a "Super Saturday Sale," which was apparently super enough that it spilled over into Friday and Sunday.

Was Prime Day a worthy addition to the overcrowded retail calendar, already "packed with sales, sales and more sales," as the New York Times pointed out? Amazon was quick to declare victory, describing sales volume that exceeded results on Black Friday last year and how it signed up "hundreds of thousands" of new Prime members. The company seemed unperturbed about widespread mockery of Prime Day in social media, deriding deals on prosaic items such as shoehorns, Tupperware and Velveeta. "LOL at Amazon getting everyone excited about Prime Day," the blogger Anil Dash wrote on Twitter, "and then showing up like that clearance table at TJ Maxx."

That reference is telling, for whatever juice there is in American retailing these days can be found among discounters and price-cutters such as TJ Maxx and its corporate sibling Marshalls, along with the likes of Aldi, Costco, H&M, Old Navy, Trader Joe's and Zara. The old slogan for the Meineke auto-care chain, "I'm not gonna pay a lot for this muffler," has become a mantra for consumers across all categories.

That hasn't been lost on mainstay retailers. Some are expanding their off-price operations, among them J. Crew, with J. Crew Mercantile; Neiman Marcus, with Last Call; Nordstrom, with hautelook.com and Nordstrom Rack; and Saks Fifth Avenue, with Off 5th. Others are getting into the game, such as Kohl's, with Off Aisle by Kohl's; Macy's, which used the slogan "It's smart to be thrifty" from the 1920s through the 1950s, with Macy's Backstage; and Whole Foods, with 365 by Whole Foods Market.

At the same time, the discount specialists refuse to stand pat, racheting up the competition. Aldi introduced a humorous online video series last week that asserts, "To know Aldi is to love Aldi," and describes the Aldi experience as "Simply smarter shopping." And the German discount grocer Lidl, which competes against Aldi in Europe, is jumping into the American market, Supermarket News reports.

What's the endgame for discount retailing? There's only so low prices can go, and some shoppers dismiss the seemingly continuous roller coaster of sales followed by "regular" prices as a shell game. Yet JCPenney failed utterly at trying to replace constant sales with an everyday low price strategy.

It should surprise no one that in the wake of the worst recession since the Great Depression, consumers still want to believe they're saving money every time they shop. Clever marketers will enthusiastically embrace the idea, widely attributed to Costco, of presenting a shopping trip as a treasure hunt. After all, it's not that far a journey from "It's smart to be thrifty" to "Simply smarter shopping."