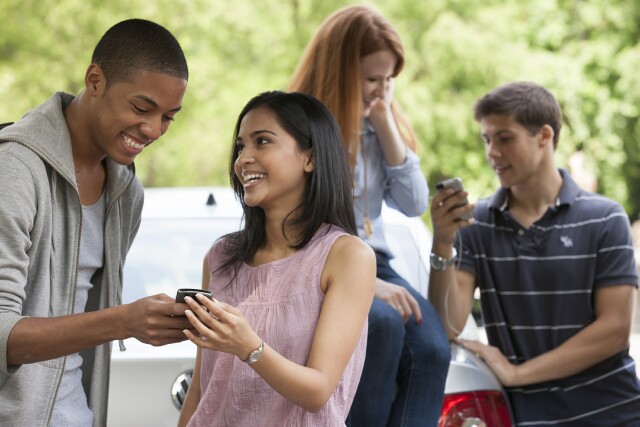 The media had fun last week when stock of Snap Inc., the parent of the photo-sharing and messaging app Snapchat, began trading in a successful IPO. "Snap's shares crackle and pop," CNET reported, invoking the trio of famous brand characters for Rice Krispies cereal. That was appropriate for reasons other than loving puns: Suddenly, Snap Inc.'s valuation exceeded that of Kellogg, which sells Rice Krispies, as well as other marketer mainstays such as Delta Air Lines and Target. It was, in fact, the best-received tech IPO since Facebook's in 2012. I haven't been able to find any headlines referring to Snapper weed trimmers or Snap-E-Tom, the Bloody Mary mix; perhaps they're being saved for articles about Snap Inc.'s first quarterly earnings report.

Sir Martin Sorrell, CEO of WPP, the world's largest agency company, says he believes mobile-focused Snapchat could become an effective competitor to the twin powerhouses of digital advertising and marketing, Google and Facebook. WPP agencies spent $90 million with Snapchat last year, Adweek reported. While that's a fraction of what they spent with Facebook ($1.7 billion) or Google ($5 billion), it's a nice chunk of change considering that the text messages, photos and videos shared on Snapchat disappear after they're viewed.

Speaking of nice chunks of change, a media stalwart, the NBCUniversal division of Comcast, opened its wallet wide as part of the IPO, investing $500 million in Snap Inc. That one of the country's oldest media brands -- NBC just celebrated its 90th anniversary -- would invest so much in one of its newest -- Snapchat dates to 2011 -- is another example of how transformative digital media has become.

And yet, let's not get carried away here. Yes, digital media can help Madison Avenue reach consumers more efficiently and effectively. That's why the likes of WPP are spending so much time and treasure online.

Hey, everyone, the geniuses say, visit our website! That is, if you can navigate around the issues many believe Snapchat and media such as BuzzFeed are seeking to address: pop-up and pop-under ads; the extremely loud auto-play commercials that auto-start, and paid messages you didn't want or ask for turn up in your news feed. Oh, and try to not go crazy when you see, for the 500th time, a banner ad promoting a product you searched for last night or last week or last month -- a product you even perhaps actually bought, but it's still chasing you around the Internet with the obsessiveness of Inspector Javert.

It's also possible that the only thing worse than too many ads is no ads at all. The many opportunities that consumers have to enjoy content without ad breaks, provided by streaming services such as Netflix, is souring them on putting up with ad-supported alternatives.

So is it any wonder that the popularity of ad blockers is growing? Though it's hard to get reliable data, since many surveys are conducted by firms that have vested interests in the business, it's been estimated that more than 10% of Internet users employ software to avoid digital ads. Worse yet, more than 40% of millennials -- the very target audience most desired by so many marketers -- may be using ad blockers.

There are numerous other problems with digital media. After falling short on promises that their ad platforms would be transparent, Facebook and others are scrambling to improve the data they are providing to clients.

Giant advertisers are signaling they’re fed up with continuing difficulties in basic areas such as ad viewability; they’re also mad about fraudulent traffic and finding their ads near inappropriate content. Then there’s the problem of deliberate misinformation flooding social platforms, which diminishes their value as ad outlets as well as making them less reliable as news sources.

Marc Pritchard, Chief Brand Officer of Procter & Gamble, the nation’s biggest advertiser, has spoken out about those concerns twice in less than two months. “We will vote with our dollars,” he told Advertising Age, and if that isn't a warning then Mr. Clean has a full head of hair.

Look, nobody's blind to the myriad advantages of the digital media. One of the reasons Snap Inc. did so well on Wall Street was its satisfied clients on Madison Avenue, thanks to innovations such as branded lens filters for photos that can make users look like Taco Bell tacos. And 53% of Snapchat users are ages 18 to 34, a higher percentage than for any other social platform.

Pointing out the faults of the new media doesn't mean I'm overlooking the faults of their older counterparts. By interrupting their programs with more and more breaks, and stuffing those breaks with more and more commercials, TV was way ahead of digital media in derailing their own gravy train.  What's the ad-skipping feature of a DVR if not an early version of an ad blocker?

I'm just reminding the instant multimillionaires at Snap Inc. that it wasn't too long ago that everyone was fawning over Twitter as The Next Big Thing for marketers. Make sure you're paying attention to the wants and needs of your customers and consumers.