Stuart Elliott: Nike, With Help from Kaepernick, Revives "Just Do It" 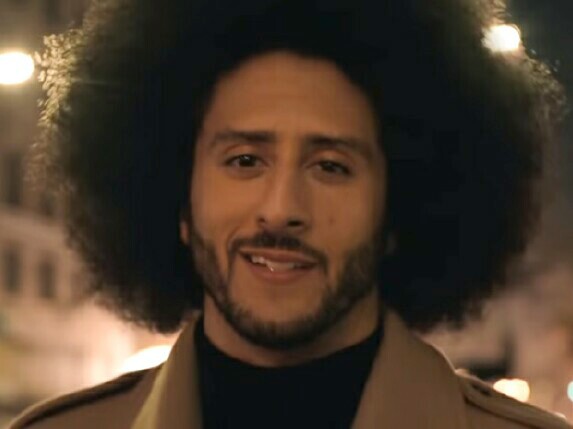 These days, when it comes to the intersection of sports, politics, business and marketing, everybody, it seems, wants to get into the act.

Case in point, the crossword puzzle that appeared in the September 5 issue of The New York Times.  The clue for 37 across was "Take a stand by not standing," and the answer was "KNEEL."  The answers to six other clues were the names of NFL teams, among them the Giants, Dolphins and Patriots.

That, of course, brings up the big question roiling the country for the last two years: Who are the Patriots -- er, patriots -- in the dispute involving the football players who have been kneeling and otherwise protesting during the national anthem to call attention to police brutality, race relations and social injustice?  The controversy has become even more contentious since President Trump weighed in with his trademark bombast on the side of -- well, I'm not quite sure, but it's either the anthem, the flag, the military or, more likely, himself.

The fracas already was going to grow louder for several reasons: the new NFL season was starting, ESPN had decided it wouldn't carry the playing of the anthem before Monday Night Football telecasts and Colin Kaepernick, the player who kicked off the protests, was told he could proceed with his case against the league on charges that teams were colluding to keep him on the sidelines.  But it all reached DEFCON 1 last week when Kaepernick revealed on Twitter that he'd be the centerpiece of new ads from Nike to mark the 30th anniversary of the brand's landmark "Just do it" campaign.

"Believe in something," urged the initial ad, featuring a photo of Kaepernick.  "Even if it means sacrificing everything."  It was followed by an anthemic commercial, narrated by him, that Nike cheekily debuted during the NBC broadcast of the first game of the NFL's 2018-19 season.  The spot, themed "Dream crazy," echoed the famous Apple "Think different" commercial in its celebration of following your own lodestar.  (No, I'm not the author of the anonymous Times Op-Ed article.)

Kaepernick's reappearance in Nike's advertising was surprising; he's been under contract to the marketer since 2011 but hasn't appeared in anything for two years.  Not surprising was the ensuing firestorm, fed by Trump, right-wing media and MAGA (Make America Great Again) fans who took to social media as they burned or cut up their Nike sneakers or athletic wear.

From my perspective, the potential benefits for Nike from the campaign outweigh the risks, primarily because, for the first time in years, there's buzz about a Nike marketing effort.  Never mind MAGA, it's MNRA: Make Nike Relevant Again.

Once upon a time, Nike was practically unequaled in producing topical ads with talk value, so important to a marketer that seeks to reach younger, influential consumers.  Those ads were so popular, as I wrote in the Times, that all you had to do to remind people about them was to repeat the slogans: "Gotta be the shoes," "You don't win silver, you lose gold," "There's no finish line," "I am not a role model" and, it almost goes without saying, "Just do it."

Nike lost its perch on the cutting edge for a variety of reasons:  It matured, growing very large; signed endorsers such as Lance Armstrong and Oscar Pistorius, who generated as many headaches as headlines; and faced myriad brands copying its successful formula even to the point of parody, like a campaign Izod is introducing this month themed "Just go buy it."

I don't mean to suggest that Nike is reteaming with Kaepernick only for the sake of likes and clicks.  The renewed partnership makes sense because it fits with Nike's image; after all, it's a brand that, many times before, has offered its spokespeople platforms for social or political commentary.  In an era when marketers are being pushed, perhaps for the first time, to take stands on polarizing issues, Nike can assert confidently it has been there and done that.

Also, the campaign is a timely and eloquent way to bring to life the "Just do it" message for a new generation of shoppers, reminding them it is meant to extend beyond athletic performance into the realm of making the world a better place to live.  As Kaepernick declares at the end of the commercial introduced last week: "So don't ask if your dreams are crazy.  Ask if they're crazy enough."

There's no denying that Nike carries around a lot of baggage, from widespread "Me Too" problems in the workplace to complaints about conditions at its factories.  Those who want Nike to stop providing a soapbox for those in its ads to discuss more than sports are eager to bring up, over and over, the company's shortfalls and comeuppances.

Well, nobody's perfect, to quote the end of Some Like It Hot.  I'd rather a flawed firm join in the conversation to help make a difference than a perfect one that keeps its corporate mouth closed.

And there's no denying that more could be done to assist the NFL players in getting across the purpose of what they're doing.  Too often, the movement is characterized as protesting "The Star-Spangled Banner" instead of, as it's meant to be, protesting societal woes during the playing of the anthem.  Strong efforts in that direction have included a couple of campaigns from the WP Narrative agency.  One, #takeaknee, which sought to counter perceptions that kneeling is un-American, featured a powerful video declaring, "For those who don't have a voice we take a knee."

So here's to Nike. Just do it. And do it. And go back and do it again.

Editor's Note: Look for the next Stuart Elliott Report on Wednesday, October 10.