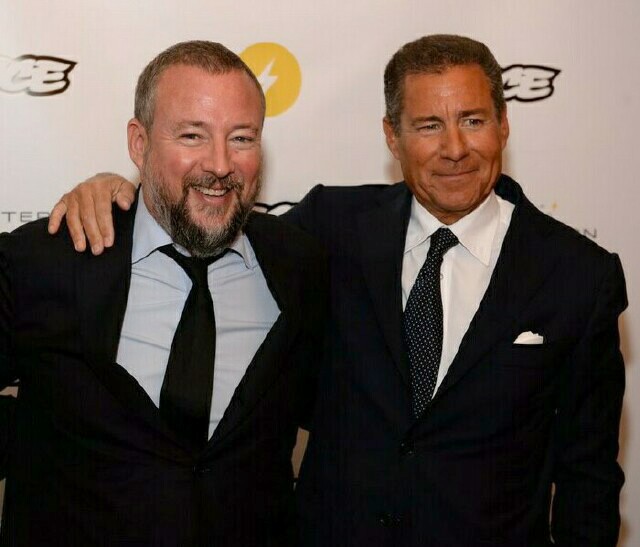 The grand poobahs and panjamdrums of traditional media have welcomed an upstart into their ranks as only they can: by presenting him with an award at an X-rated roast.

The honoree, Shane Smith, co-founder and chief executive officer of Vice Media, was feted at a luncheon Wednesday at the Pierre hotel in midtown Manhattan. The event was sponsored by the Center for Communication, which bestowed upon Smith its 2015 Frank Stanton Award for Excellence in Communication.

Yes, much was made by the profane roasters of the contrast between Stanton, the august leader of the media pillar CBS, and Smith, who was heckled for his humble beginnings in Canada, his personal peccadillos and the kinds of salty content and frank sensibility that are Vice's specialty. It may be safe to say that the words and phrases used by comedians such as Fred Armisen, Eddie Huang, Johnny Knoxville and Clare O'Kane had never been uttered with such frequency and enthusiasm from the stage of the Grand Ballroom of the Pierre.

"This is going to be a Center for Communication luncheon like no other," J. Max Robins, executive director of the nonprofit, promised the estimated 300 people at the luncheon, describing Smith as "Ted Turner, Christiane Amanpour and Howard Stern all rolled into one."

Yet there were several welcome-to-the-club aspects to the afternoon, underlining how profoundly the media world has been transformed in a relatively short time. For instance, stalwarts of the establishment such as Tom Freston (pictured below with Smith) and Richard Plepler (pictured at top, right) joined the ranks of the roasters. Hey, why not? They work with Smith and Vice. 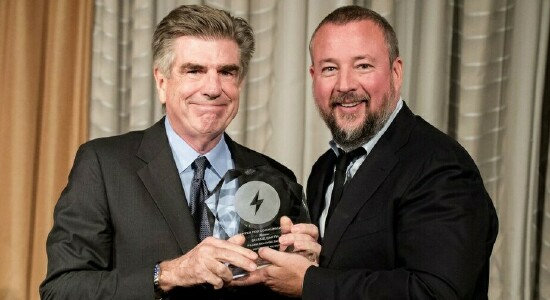 As Smith received the honor, Vice and the Center announced a partnership to help the Center achieve its goal of more diversity in journalism, including Center fellowships underwritten by Vice and a series of forums called Vice New Voices.

And as provocative -- and filthy -- as the jokes often were, the remarks came off more like affectionate tributes than the nasty insults of, say, a Friars Club or Comedy Central roast.

Smith, in an interview before the event, said it was the first time he'd been roasted, adding, "Maybe I'll be pissed off." But he was forearmed, he confided, preparing a video that harshed back at his roasters. (More on that later.)

Freston kicked off the bash, figuratively and literally, with droll remarks that skewered Smith as part of a gang of Canadian "welfare cheats," adding, "Clearly, Donald Trump wants to build a wall on the wrong border of this country."

After mock-praising what Smith has accomplished by extolling Vice as growing to "a valuation as bloated at Shane is," Freston introduced Plepler, chairman and chief executive officer of HBO, who declared, "I'm proud to call Shane a friend -- of my friend Tom Freston."

Smith is "a grass roots journalist who smoked the grass, then smoked the roots," Plepler said, and there is "not a fucking thing in common" between him and Stanton.

"But clearly, the media landscape has changed," Plepler said, suggesting that Stanton is "rolling in his grave" and perhaps Smith was to have received "the Frank Zappa Award." 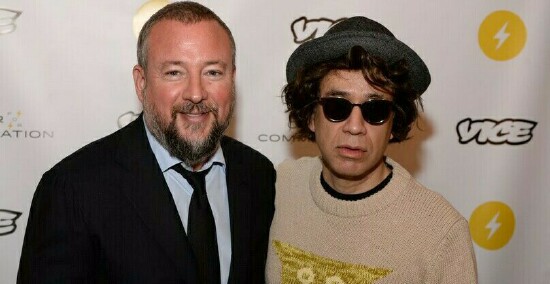 Plepler was followed by “Portlandia” star Armisen (pictured above right), who pretended to be a bumbling Vice-style journalist named Jeremiah from "Dronez," an episode of the IFC series "Documentary Now!" Among his scoops was the revelation that there's a part of Manhattan near the Pierre too poor to support development: "Central Park."

"We investigate, we examine, we look up to Shane and everyone at Vice," said Armisen, wearing a hat and sunglasses and never breaking character. After him came Huang, the foodie and author who also is a video host for Vice. Huang delivered an expletive-laced rant that alternated between castigating Smith ("Like working for the Canadian Genghis Khan") and saluting him as a "dad" who's "fucking cool."

Huang used slides on large screens to share with the audience some explicit emails he'd exchanged with Smith. The emails were revealing for another reason: They included Smith's email address (shane@vice.com) and Huang's.

O'Kane was up next, and she killed. "I'm Vice's newest diversity hire," she said, and "to thank me, they made me do this."

"I'm young, 25, a Millennial, I'm ethnically ambiguous" and "one time I got fingered on a skateboard," O'Kane said. "I'm Vice's target audience, baby." Vice "is just Fox News for people who do Molly," she added. 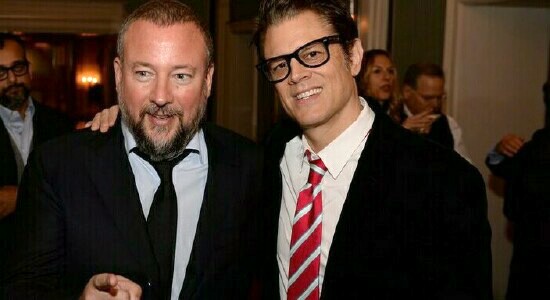 Knoxville (pictured above right), the final roaster, began by roasting the other roasters. It makes sense for Huang to work for Vice because, Knoxville said, "It's the No. 1 place to go for yellow journalism." And he asked the tanned-looking Plepler, "Do you powder your face with Tang?"

Knoxville then placed Smith in his sights. "Shane is to journalism what Jared from Subway is to Save the Children," he said. "Jim Jones is a more orthodox C.E.O." Freston then returned to present Smith his award, offering words of praise, and Smith received a standing ovation.

Smith thanked Huang for sharing his email address, calling him "my one-man Sony hack." He joked about how many recipients of the award, including Freston, were subsequently fired: "It's a jinx. So I'll be out soon."

Now it was time to "get my own back," Smith said, and the video he brought with him was played on the large screens. Smith, at a 21 table at a Las Vegas casino, was kibitzing with friends and the dealer, getting revenge on his roasters.

Smith claimed he rejected a request from Plepler to produce "an expose on Netflix," called Armisen "a very unhappy guy" and asserted that Huang has "burned more crews than any other prima donna host, including me." Asked about O'Kane, Smith replied, "Who?"

Smith offered that he feels "bad for" Knoxville because "he's old," a jape underlined when the dealer said she thought Knoxville was popular "maybe in the '70s." The video concluded with Smith a big winner, scoring 21 after drawing a card on 16.

Though the event was presented as anarchic, it was well run, starting at 12:30 p.m. and over by 2:10. Robins joked that he had promised Smith it would be done in time for "his 2:15 Google hangout with Dennis Rodman and Kim Jong-un."