Stuart Elliott: What a Long, Strange Ad Bowl This Year 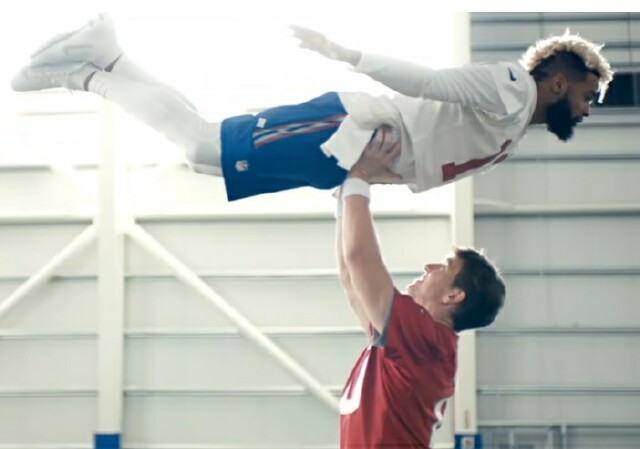 It was quite the long, strange Ad Bowl that Madison Avenue played inside Super Bowl LII last night.  In fact, the lineup of glitzy and expensive commercials turned out to be as fractured and fragmented as the nation to which the marketers were pitching their wares.  It's a good thing the game was so exciting.  It made up for a dizzy feeling -- mingling "Is that all there is?" with "Did I just see all that?" -- after the 60 or so national ads ran their course.

There were imaginative commercials that worked best if viewers were paying close attention -- sometimes a big ask on Super Bowl Sunday.  Those included a series of clever spots, themed "It's a Tide ad," for Tide detergent, that sent up the tropes of Super Bowl advertising by suggesting that Tide was cleaning up all the other commercials; a delightful homage to end-zone celebrations and Dirty Dancing from the National Football League, featuring the New York Giants (pictured at top); a 90-second, star-stuffed opus for Amazon Alexa that displayed the acting chops of Amazon boss Jeff Bezos; a commercial to promote Australian tourism that pretended to be a trailer for a remake of the movie Crocodile Dundee, complete with a cameo from Paul Hogan, and a rap-centric doubleheader of an ad, pairing a fiery Doritos flavor with an icy variety of Mountain Dew.

For someone like me, for whom this was the 29th Super Bowl during which I was paying closer attention to the ads than to the game, those commercials were by far the best of the evening.

There also were socially-conscious commercials that sought to score points for caring about diversity, the environment and humankind, sponsored by brands such as Budweiser, Coca-Cola, Stella Artois, T-Mobile and Toyota.  Some landed better than others; I really liked Coke but thought T-Mobile awfully earnest.

Such an approach clearly was meant to acknowledge America's fraught mood in the age of Trump, as several excellent commercials did during the Super Bowl last year.  But it's a high-risk proposition and can fall flat if the audience believes an ad is inappropriate, insincere or over the top.  Those perils were demonstrated by the strong, immediate backlash to a spot for Ram trucks that misappropriated remarks by Martin Luther King Jr. for a paean to service.

It turns out that King's address originally included sharp critiques of advertising and commercialism, even singling out cars and the Ram sibling brand, Chrysler.  If Tide had, indeed, been able to clean up all the other Super Bowl spots, it should have done something about the woeful Ram ad.  Otherwise we might soon see a commercial that salutes King's "I Have a Ram" speech.

Confusingly, another Ram sibling, Jeep, ran a commercial later on that took issue with brands that run the very kind of commercial that Ram ran, filled with "grandiose speeches" and "making claims to some overarching human truth."  What?!?!?  That was way too much to deal with or process, especially when the game was at a nail-biting stage.

There also was something completely different: spots filled with goofy slapstick, bathroom humor and frat-bro hijinks, appealing to lower common denominators in a way that most Super Bowl advertisers walked away from years ago.  Those advertisers included Febreze, which celebrated a man whose "bleep don't stink"; Groupon, wasting Tiffany Haddish with a football-in-the-crotch joke, and M&M's, wasting Danny DeVito with "Eat me" jokes.  Definitely not my ideas of what to do with a Super Bowl ad slot.

Then add to the mishmash what seemed like a larger-than-usual spate of spots for upcoming TV series, movies and streaming series, from Amazon Prime, Disney, HBO, Hulu, Netflix, Paramount and Universal, along with commercials that twinned spiels for cars -- Lexus and Jeep -- and movies -- Black Panther and Jurassic World: Fallen Kingdom, respectively.  Poor Tom Cruise, the victim of a bad running order: The spot with the trailer for his next movie, Mission: Impossible -- Fallout, ran right after a hilarious spot for E*Trade depicting older folks who can't stop working because they don't have enough money to retire.

Put all those disparate types of commercials together, and stir in NBC's promotions for the Winter Olympics and a special episode of This Is Us, and what was the result?  A cacophonous, jumbled Ad Bowl that, frankly, had a hard time competing with the thrills of the game between the Philadelphia Eagles and the New England Patriots.

Of course, that's a gamble marketers make when they shell out the huge outlays for Super Bowl commercials: the game always could overshadow the ads.  But is it too much to hope that Super Bowl Sunday -- the biggest day of the year for Madison Avenue as well as for pro football – continues to serve as some kind of showcase for the best and brightest of the industry?   This year, it came off more like an appeal for a new Campbell's "soup that eats like a meal," Chunky Goulash.

I'll end on an optimistic note: If the Eagles can win a Super Bowl, all things are possible.

Editor’s note:  Look for the next Stuart Elliott Report later this month, after the Olympics, as Stuart reviews the ads of the Winter Games.