Super Bowl and Academy Awards Are The Two Biggest TV Events of the Year, Which Pays Out for Advertisers? - DailyTRA

According to Ad Age, ABC is seeking between $1.6 million and $1.7 million for a 30-second spot on its 2012 Oscars telecast. While the Oscars are one of the year's biggest-ticket TV events that viewers tend to watch live -- thus commanding a much higher price than run-of-the-mill primetime fare -- the event still isn't in the league of the Super Bowl. Record-setting viewership for that event has sent ad prices skyrocketing from between $2.5 million and $3 million for the 2010 broadcast on CBS to as much as $3.5 million on the coming telecast slated to air on NBC.

With such a steep price tag for these events, advertisers want to know that they're getting a return on their investment. TRA has tools that can help advertisers to measure the impact of advertising during these big-ticket live programs, as well as during run-of-the-mill programs. For example, Brand X is a CPG brand that advertised on both the Academy Awards and on the Super Bowl in February 2011. A TRA Media TRAnalytics ROI Report shows the incremental Brand X sales generated among households exposed to Brand X's ads during these two events. While the Academy Awards had a smaller audience than the Super Bowl, it was generating more sales for Brand X.

With this kind of information, advertisers can made decisions about which TV programs and events are best for investing their advertising dollars. 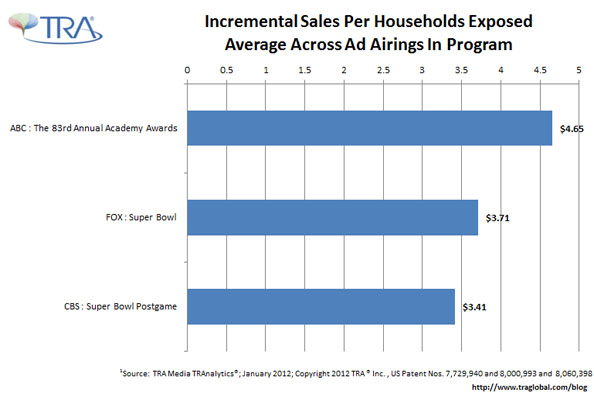