"Supergirl": J'onn J'onzz Faces a Grim Reality to Which Many Can Relate 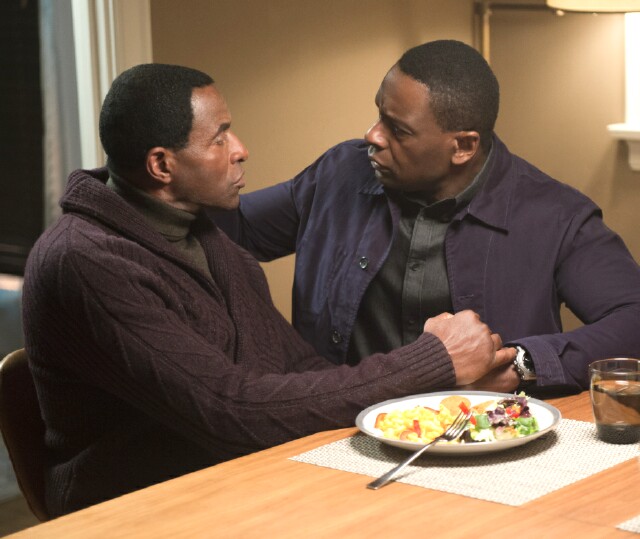 The CW's Supergirl puts its usual big bads on the back burner this week for what series executive producer Robert Rovner is calling "a very emotionally charged episode," in which J’onn J’onzz is forced to face the reality that he may soon lose Myr’nn, the father with whom he was recently reunited, to dementia. Realizing his memories are starting to fade, Myr’nn digs deeper into his Martian faith, and in the process unwittingly unleashes psychic disturbances with detrimental effects to those around him.  Truths are revealed that will forever change relationships, which are all a part of a larger arc for the series.  "One the great things about writing for Supergirl is we have a great pallet of characters and circumstances to write to," Rovner said after a recent preview screening of the episode.  "We always start with the characters, then tell stories that will propel them.  It's very rewarding and exciting to be able to tell different types of stories and [see] how each episode pushes a character.

"J'onn loves his father very much and doesn't want to see him go down this road," he continued.  "He didn't want to face it either, so this episode is all about denial and also explores Kara's (Melissa Benoist) denial about her relationship with Mon-El (Chris Wood).  That's something she has to face -- that their love story wasn't as perfect she had romanticized it to be."

Guest star Carl Lumbly, as Myr'nn, is front and center of this week’s episode, titled In Search of Lost Time.  Although a recent addition to the Supergirl cast, he is no stranger to the superhero genre having voiced the character of his TV son J'onn in the Cartoon Network's animated series Justice League.  "It was such a joy to have the opportunity to, in my own mind, come back as my father," Lumbly said of the role.  "The reality is David Harewood is the definitive J'onn.  If I could imagine what I wanted to see when I was voicing him, it would be him.  So our relationship as characters and our friendships as men being collegial in this journey is a joy."  (Lumbly is pictured at top left with Harewood.)

According to Rovner the decision to introduce a dementia storyline came from many of the Supergirl writers' personal experiences.  "A lot of us have dealt with dementia in our own lives, " he revealed.  "So we wanted to make the story very relatable.  Myr’nn will kind of be facing circumstances we feel a lot of children and their parents go through on this journey together.  One of the beautiful things about the story of J'onn and Myr’nn is the process of how Myr’nn copes with this and the way J'onn helps him, which will have a profound effect on J'onn.  Even though their time together may be shorter than they'd hoped, it will really forever change both of their lives and their perspective on things."

"I've known caregiving and I know what you can determine in your own mind as having failed at being a caregiver," Lumbly revealed.  "I haven't had to deal with this specific condition, but I had a situation where my late wife had a number of cancers so I took certain steps to be present, and not necessarily because there was a date, but because every day was precious.  Every day held the possibility that the situation could be turned around.  I think a lot of people have a parent who one morning may not know who you are, and I don't know how you rate that experience because that one would be stunning for me.

"To be faced with this notion that your capabilities and everything you have known about yourself and have taken pride in is about to be snatched, and the idea that your son is now put in the position of having to be a caregiver -- all of these things create tensions," he continued.  "Myr’nn is living a miracle because he believed that it was all over.  He, like J'onn, believed he was the last Martian, and he had faith and held onto it.  Even if he couldn't make a change in his condition, he continued to hold on to his beliefs and that faith manifested in this miracle he didn't expect.  He didn't think his son was alive, but now he has a relationship with his son, a new planet, coffee, all sorts of new things.  Mortality is difficult to accept, but it is a reality -- knowing that there is an end.”

This emotional father and son journey will play out for the rest of the show’s current season, something Lumbly is thrilled about.  “What I like about the show is it's kind of subversive and sneaky,” he said with a smile.  “It enables you to think about things without necessarily feeling that you're being lectured.  In terms of playing that and working with David, I think we both gave each other permission to go where we have to.”

Supergirl is telecast Monday at 8.p.m. on The CW.  It can be streamed the following day on CWTV.com or The CW app.