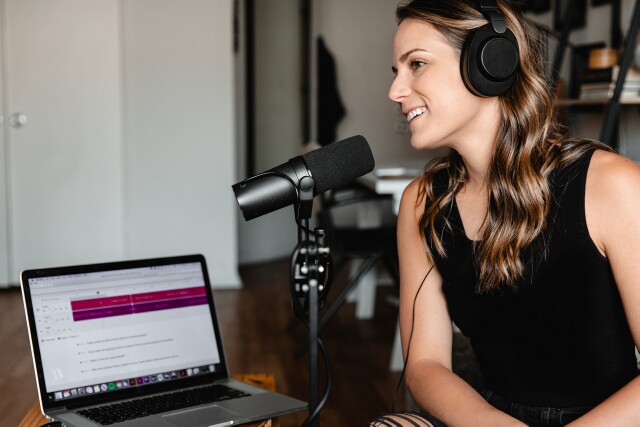 As podcasts continue to grow in popularity -- we're talking 116 million active listeners nationwide -- the question of how best to reach that audience with advertising is more important than ever. Host-read ads, where a podcast host reads the ad (usually not verbatim) during the episode, have long been the pinnacle of podcast advertising. But not every host wants to do reads themselves, and for smaller podcasts with “long-tail” audiences, announcer reads on Pandora or Stitcher can open a path to monetization. How effective are those announcer reads? Very, according to SXM Media's latest research. In fact, 15-second announcer reads were just as effective for brand recall when compared to Stitcher's benchmark, which was developed over years of podcast and effectiveness research.

"What makes podcasting special is that it's leaned-in listening. When I'm listening, I'm truly listening," says Claire Fanning, SXM Media's Vice President of Ad Innovation and Strategy. "It's authentic connections with hosts and feeling like they're your friend."

That's why it's important for advertisers to connect with these audiences in ways that don't disrupt their listening experience.

Currently, SXM Media offers 15-second, 30-second, and 60-second spots in podcasts. For years, the prevailing wisdom was that longer ads read by hosts were the way to listeners' hearts. So, Fanning and her SXM Media team set out to see if that was the only way.

Partnering with Xfinity and research firm Signal Hill, they had subjects listen to 15-second, 30-second, and 60-second ads — both announcer reads created by SXM Media's in-house creative agency, Studio Resonate, and pre-recorded ads provided by marketers — within episodes of either the Hidden Brain podcast or the Oprah Super Soul Conversations podcast.

It was the performance of the :15 spots that really surprised Fanning — in a good way. "15s are 1.8 times less likely to be skipped, and they scored highest in authenticity," she says. "They allow you to be very targeted in your messaging." And because you only have time for one message, advertisers can really hone in on making that message as memorable as possible. This ad length is also great for upper-funnel activities. Given that SXM Media also found no difference in recall or awareness between :15 and :60 ads, marketers now have a viable alternative with their ad creative.

That's not to say the :60 is ineffective. "In this particular study, we saw a 12-point lift in consideration, and a seven-point lift in inspiring action, which in this case was visiting a website for more information," Fanning explains. The 60s are great for lower-funnel activation and for brands that have multiple messages they're looking to get across (hence, more time to explain their products and services). The :60 spot for Xfinity had five messages, and all five saw lifts between 14 and 23 points.

"With podcasts, as a listener you're in that 'front of the class' mentality," Fanning adds. "You're ready to listen, and you're finding this format engaging and you're learning something new."

To align with today’s diverse podcast listeners, Studio Resonate works with diverse announcer talent. "We've done a lot of work around breaking the sonic color barrier, ensuring that we have a representative cast," Fanning notes.

Through Studio Resonate, they are establishing their own vocal equity; having a diverse range of talent increases the ability of listeners to develop a positive relationship with each of them.

"Our strategy continues to develop, based on these insights," Fanning says. "Because we've been in this space for so long and we understand that each of these decisions are so meaningful, we really want to make sure that they're data-backed and validated as much as possible." To that end, SXM Media's next round of research will look into podcast ad positions and their effect on listeners.

"We want to modernize the podcast space as we scale the opportunity, while protecting what makes it special," Fanning adds.