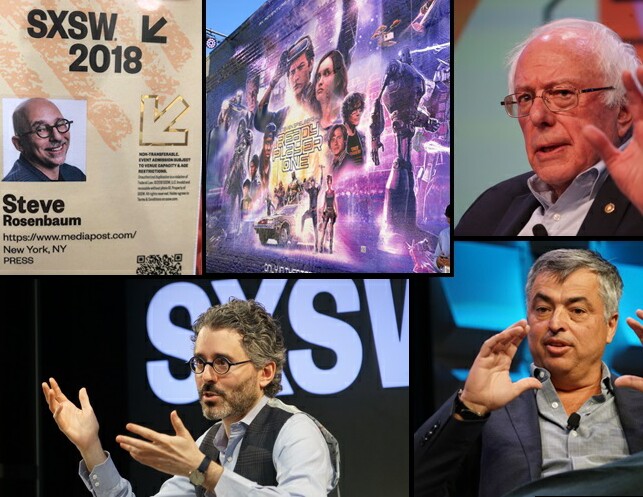 Every March for the past ten years, I’ve spent a week in Austin, Texas.  It’s not for the BBQ, or the beer, or even the music … though I’m not going to lie, the sounds and tastes of Austin are pretty alluring.  Each year I go to South By Southwest, the big, noisy, cacophonous collection of film, music and interactive experiences that annually move this weird little Texas town into the center of the global conversation.  I go to see what’s new, what’s trending and what’s over.  What follows are five key observations I made at SXSW 2018.

1)  Apps are over.  SXSW is where Twitter began. It’s where I got my first serious connection with Foursquare.  For many years, the streets were jammed with teams of promoters, handing out swag promoting new apps and gizmos.  But it’s clear from this year that apps are dead -- no buzz, no handouts, no digital phone tech to speak of.  Tech wasn’t gone, but there was a notable shift to big names like Sony, Intel and Panasonic.  (Don’t miss “Pecoral -- dental care for your pets with a community of support.”)  Also, startups made a strong impression at the SXSW Accelerator, but street teams seemed to be a thing of the past.

2)  Austin is growing.  The hardest thing about SXSW in the past was that various content tracks were a schlep to get to.  Journalism was at the Sheraton.  Gaming was across the river.  This year, thanks to the JW Marriot and the Downtown Hilton, almost everything was within walking distance.  The Health Expo was at the Palmer Event Center across the river, but I didn’t get to it.  I stayed downtown.  Brand new hotels are opening; the Fairmont opened just as SXSW began after a tussle with a certificate of occupancy.  With the growth, and with a number of high profile incidents around the world, there was a heightened security on the streets, with flashing police cruisers and even sand-laden garbage trucks blocking the most crowded pedestrian thoroughfares.

3)  Activations have evolved.  There were a few years when brands seemed to descend on SXSW for “brand activations” -- big pop-up experiences meant to wow attendees and make a lasting impact.  In the past, FedEx, Pizza Hut, Bud Light, Gatorade and many more had big brand activations.  Even Oreo Cookies had a high-tech custom cookie event.  But this year the brands were gone.  Instead, the biggest impact was in tentpole content events. Ready Player One had a massive VR event, and there was a real-life version of the Stacks, each mobile home housing impressive VR experiences.  The surprise premiere at SXSW sold out in two seconds, and director Steven Spielberg was on stage to introduce the film.  The film came to the fans, and the reviews and buzz responded accordingly.  Big buzz from SXSW.  Not to be outdone, HBO brought attendees to a four hour Westword experience.  HBO recreated an entire version of the show’s fictional town of Sweetwater, complete with performers, taverns serving real booze and lots of stories and individual mysteries you could solve.  Activations taken to a whole new level.

4)  SXSW International is growing.  This year marked an important change in the make up of the SXSW audience.  From around the world, SXSW was a destination for a growing group of  international attendees.  With international houses hosting events, parties, performances and panels -- including houses from China, The Netherlands, South Korea, Spain, Scandinavia, Peru, Argentina, Mexico, Taiwan, Germany and Africa.  The diversity in voices and conversations could be felt in the convention hall and at after-hours conversations.  Even though some attendees had to work their way through visa complexity, it seemed clear that the international allure of Austin will only continue to attract a more international audience.

5)  Boldface names are embracing Austin.  SXSW has always been a magnet for film and music artists -- both big names and rising stars.  But in recent years the growth of politics, known as the Government Track, has brought in some of the world's most important and thought-provoking names.  This year the list of important and in some cases controversial names seemed to be even more prominent.  Among them: Bernie Sanders, London Mayor Sadiq Khan, Apple’s Eddy Cue, Vice President Joe Biden, Elon Musk, Steven Spielberg, Pussy Riot, Chelsea Manning, Mark Hamill, Arnold Schwarzenegger, New York City Mayor Bill de Blasio, Chef José Andrés, Ta-Nehisi Coates and Christiane Amanpour.

This year, as with all years past, SXSW changed.  Apps were diminished; politics were on the rise.  Austin is a fast-growing city with high-rise development and street-level coolness.  Is SXSW different?  Yes.  Is it fading?  Most certainly not.  What will 2019 offer up?  You’ll have to buy a ticket if you want to find out.

Steven Rosenbaum is an entrepreneur, technologist and author.  He’s founded five companies in the content space, with a drive to connect consumers, storytellers and brands. Today, Rosenbaum is part of the TED Residency program, base…