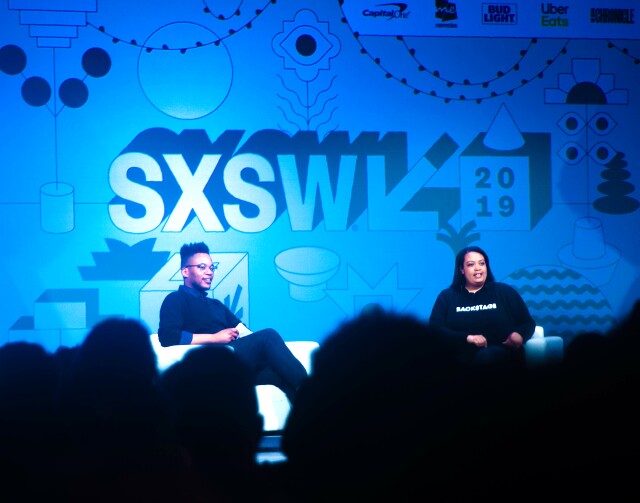 Arlan Hamilton is the Founder of Backstage Capital, a venture capital fund recognized for investing $5 million across over 100 companies, all led by people of color, women and/or LGBTQ founders.  Although Hamilton (pictured above right) does not have a background in finance, she has been creating spaces for herself her whole life by embracing the true nature of a rock star entrepreneur.  Last fall, she made history by gracing the cover of Fast Company as the first black woman who was not an athlete or an entertainer.  Just four years ago, Hamilton was sleeping in a car with her mom at SXSW without a badge just so she could be in this space.  This week, as a featured keynoter at SXSW, she broke down her journey of how she went from never being able to get a meeting with a venture capitalist to personally becoming the most well-known black female VC, funding underestimated companies nationwide.

During SXSW’s Interactive series, Hamilton sat down with KC Ifeanyi (pictured top left) an editor from Fast Company, to announce the launch of Backstage Capital’s nationwide accelerator program.  Backstage Capital was founded out of an extreme need.  Less than 10% of all venture capital deals go to underrepresented communities, yet there are thousands of women, people of color and LGBTQ founders who have ideas and startups waiting to be funded.  Prior to building Backstage Capital, Hamilton was a tour manager who never made more than $22,000 a year.  During that time, while hustling to make ends meet, she heard about Silicon Valley and was intrigued by startup culture.  Hamilton knew she wanted to start a company herself, so her main goal became talking to founders and, while traveling city to city, she made a point to tap into the local startup communities.

In her keynote, Hamilton talked about how, during this process, she found a pattern of white men and not people of color getting meetings with founders.  Therefore, she decided to start a fund for people who are underrepresented but have really great ideas. When asked why she thought creating a VC firm was the best route, she said, “I think I could’ve successfully raised $2-3 million if I started a tech company, but that would’ve been short-sighted compared to what we’ve built now.”  Hamilton knows that the key to building the economic structure of underrepresented communities starts with investing in them.

Hamilton definitely understands that she is often viewed as an outsider in comparison to other venture capitalists.  Instead of attempting to assimilate into many of their biases, she chooses to authentically be herself and serve as a disruptor for her community at large.  Before Backstage Capital was known globally, many industry executives and venture capitalists doubted her capacity to reach her goal of funding 100 underrepresented founders by the year of 2020; yet she was able to surpass this goal two years early -- in just three years.  In her talk, she stated, “Being able to withstand rejection comes from being rejected my whole life.  If you don’t believe I can do something, that’s your bad.  We’re here to prove you wrong.”

Fortunately, that’s exactly what she did.

In her conclusion, Hamilton said, “This funding bias epidemic is happening now.  People are being overlooked today.  So, I thought if we don’t start this now, where are we going to be as a community in 5-10 years?”  On March 11th, Arlan Hamilton officially launched the Backstage Capital Accelerator Program in four cities aimed at not only funding companies but developing them and giving them additional resources most VCs skip over, instead of merely serving as a cash resource.  She knows that true startup sustainability for underrepresented founders comes from being able to level the playing field by offering development resources and structured curriculums to communities that have been denied for years.