The FQ at SXSW: How to Deepen the Diversity Pool of Tech Candidates 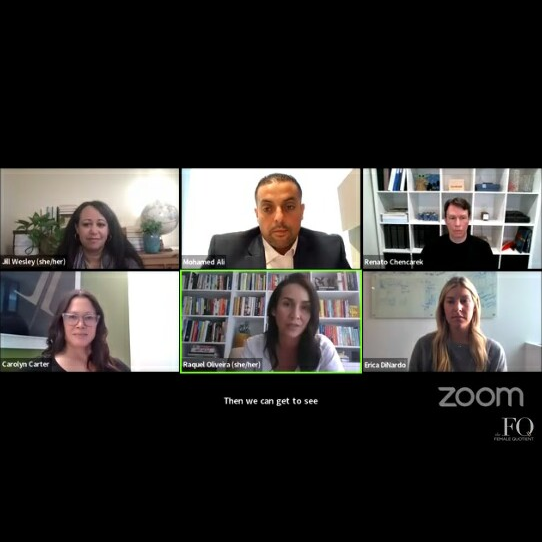 Savvy tech-focused companies are creating a more diverse workforce by considering candidates that differ from the people that are traditionally hired and extending their searches geographically beyond traditional hot spots like California, New York and Massachusetts. Those insights were front-and-center during a Female Quotient panel at South by Southwest (SXSW) titled "Recruiting in Tech: How Hiring Diverse Talent Drives Inclusion." The panel was also an exploration of how recruiting infrastructures are changing and must be changed.

One example, Dinardo noted, is The Mom Project, which includes a community of hundreds of thousands of new mothers and professionals seeking new opportunities. Other advocacy networks offering events and educational opportunities, like sponsorships and mentorships, also provide paths to more workplace diversity.

Dinardo emphasized the importance of reaching out to nearby universities and colleges, big and small, which provide training and workshop options to those planning their careers.

The panel's moderator, Jill Wesley, an Advisor, Partnerships, at The Female Quotient, noted that there needs to be a change in recruiting infrastructure to create more inclusivity, especially for women and minorities in STEM (science, technology, engineering, and math).

There are lots of barriers to entry on the STEM front, said Mohamed Ali, Vice President, Human Resources, Global Ad Sales, at NBCUniversal. However, two reasons stand out. One is that there is not enough awareness or attention given to the importance of STEM at the very beginning of children's education. He also mentioned that mentorships are important even before the collegiate level.

Ali observed that more organizations need to realize that Blacks and Hispanics, especially in STEM-related fields, can be effective as top tier executives.

In the "cultural mindset" there needs to be a better understanding of what women can be, added Raquel Oliveira, Learning Experiences Partner at SAP, whose products include enterprise resource planning software. Parents, she continued, need to be better role models from a gender perspective, showing the fluidity of how genders can share household responsibilities, such as fathers also doing some cooking and cleaning.

Engineer/inventor Renato Checarek agreed that the change in mentality is critical, adding that building such awareness isn't just moral but also a business need so that women can attain more leadership roles.

On the corporate side, IBM's Carolyn Carter, Vice President, Global Head, Payroll, said that her company has benefited from recruiting and hiring professionals early in their careers. IBM has a digital outreach program that opens the recruiting funnel to hundreds of schools and diverse educational partnerships. It especially impacts women of color.

Carter noted that another path to enhance hiring results is to require managers to have a diverse pool of candidates for jobs so that the right hiring decisions are made.

This kind of variety in candidate pools means that women and minorities really have a shot, said Wesley. "There's so much talent all over now, in every zip code, and this is where people really need the opportunity," she noted.

SAP's Oliveira remembered that at her early entry into tech there were few women. And there was the sentiment that maybe she didn't have a chance to be a manager. But she knew that she wanted to manage people. It was her mother, very busy and independent, who set the example and influenced Oliveira's professional climb.

When it comes to work/life issues, everyone on the panel agreed that attention must be given to a healthy balance between quality time with family and friends and attention to career.

Because women are making much progress in management now, there's been a backlash from men fearful that they may be left out. But Oliveira called that "not true," noting that there are still only about 25% of women in management.

Wesley seconded that. Gender discrimination against men is only a "perception," she said, noting that it will take decades to reach the holy grail of male-female parity in the workplace. Hope may spring eternal, but the panel made clear that women, minorities and many businesses of all sizes are determined to progress on a faster track.

This report was written by Doris Toumarkine.