Talk the Talk and Walk the Walk: Women and Word of Mouth Advocacy - Ed Keller 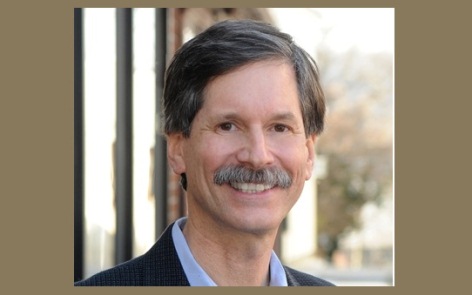 Now it's becoming a trending topic in social media circles as well, with recently reported statistics showing that women are far more active on social media sites, "racking up an astonishing 99 million more visits per month than their male counterparts" according to one widely disseminated infographic.

Given that the overwhelming majority of word of mouth takes place offline, it's important to look beyond these social media statistics to understand what's happening in terms of the larger realm of real world conversations. According to my firm's research, which measures both offline as well as online conversations, this gender gap runs deeper than time spent online. Women value word of mouth more than men, and as a result of they engage in more of it. And furthermore, women are more persuasive than men when it comes to their word of mouth recommendations. This has huge implications for how marketing strategies need to be set in today's social age.

Here are some of the facts: 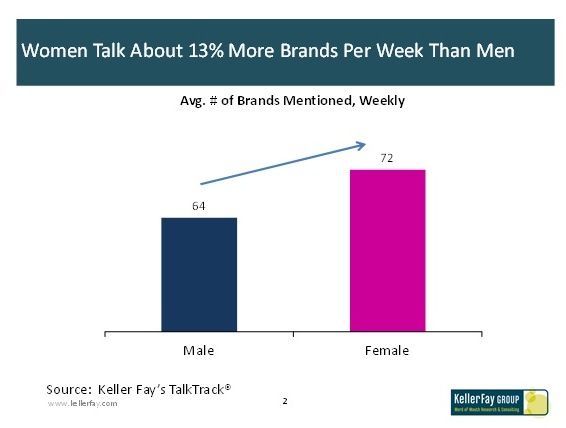 Women are also more strongly impacted by word of mouth. For example, they are more apt to perceive advice from other consumers to be more credible than men do, and they are more likely to purchase based on word of mouth than men (although the results are strong for both genders). 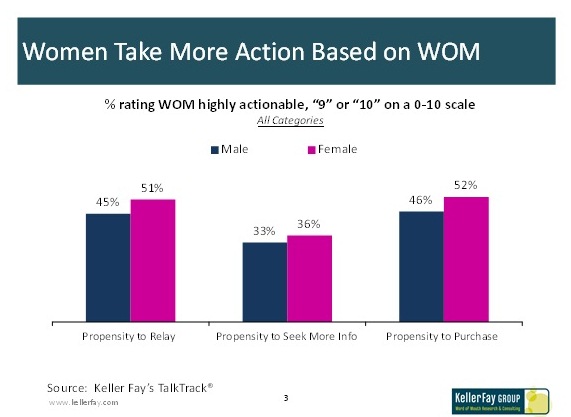 Women's WOM is more influential. What's perhaps most noteworthy of all is that men and women alike agree that women give better advice than men do. For example, when men receive consumer advice from a woman, 58% of the time they give that advice extremely high marks for credibility. In contrast men give other men those high marks 50% of the time. 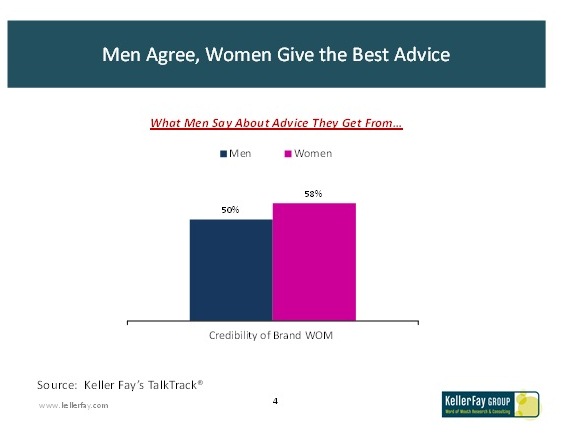 The influence of women in word of mouth is seen clearly the in the highly regarded "The Man Your Man Could Smell Like" campaign from Old Spice. That campaign is often remembered for being a viral sensation. Indeed, it was ranked as the most viral brand of the year in both 2010 and 2011. However, the seeds of success were sown well before the campaign was shot and put online. The team at Gillette realized that in order to improve sales of this men's grooming product they had not reach not only men, but also women. Wives, girlfriends, and mothers, they realized, are important decision makers and influencers for male soap and body wash purchases, and they often do the buying themselves, making more than half the purchases in the category. My firm's research further shows that when it comes to word of mouth about grooming products, men turn disproportionally to women (not other men) for advice, and they are far more likely to believe and act upon the advice of women.

The implication of these findings is profound for your marketing and sales efforts. Whether the target for your product is a men or a women, you need to be mindful of the power that social influence wielded by women. It's no longer enough to target men for men's products and women for women's products. Across all categories, the genders discuss what's worth buying and seek out advice. And men and women agree: the best advice, most of the time, comes from women. So regardless of how you are marketing – whether by advertising, in-store displays, via your website, hosting events, or using social media – remember that your messages need to resonate with women.

As the highly regarded social media strategist Ekaterina Walter has declared, the watchword of today's socially driven marketplace is "matriarchy" both offline as well as online.