Tatyana Ali Does Double Duty in the Lifetime Movie "Vanished: Searching for My Sister" 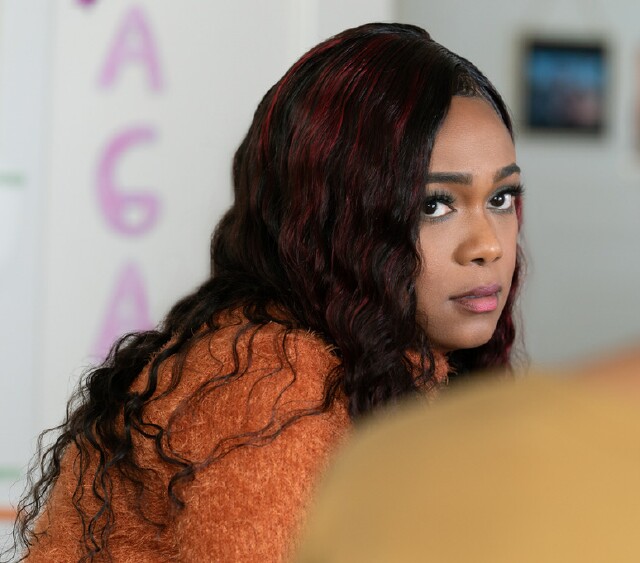 Tatyana Ali returns to Lifetime this weekend with a dramatic turn, starring in Vanished: Searching for My Sister. As the title suggests, Ali stars as a woman on the hunt for her sibling, who has mysteriously disappeared. What made the role both challenging and a departure for Ali is she plays both roles. "I've played a mom before, but never twin sisters," she explained during an exclusive chat with MediaVillage. "The new part for me was playing two characters, both at their core mothers, who mother totally differently, have totally different relationships, and are completely different people. Jada is similar to maybe some of the other characters I've played in the past, but Kayla, the sister who goes missing, was a big attraction and I was excited to play her as I rarely get the opportunity to play women like her.

"Kayla is the more 'adventurous' sister," she continued. "She's suffered from drug addiction and has more of a checkered past, so I really was interested in playing her, especially because she’s the kind of woman that people sometimes like to dismiss or devalue. We've been hearing on the news about people and their sisters, their wives, their daughters, who have gone missing, and the resources to deal with it aren’t there. It's especially true if they're women of color or black women, and that was kind of what I thought of immediately while reading this."

While the role called for duality playing twins, there was a triality to the part, as Jada, unhappy with the way authorities are treating the case, disguises herself as Kayla and immerses herself in a seedy, unfamiliar world to uncover the truth behind the disappearance. As a result, Ali found herself playing Jada as Kayla, reacting to things as Jada. "In a sense that was always in the back of my mind," she recalled. "Kayla was probably the most challenging as I feel like when [Jada] is playing Kayla, that's where a lot of her discovery happens. It's like they have this very codependent relationship. She understands her sister, as they've had similar childhoods. She knows why her sister is the way she is, but when you get to walk in somebody else's shoes, you really get to understand them. I still felt like Jada, just Jada learning about her sister.

"Even though the film doesn't directly address it, that 'twin connection' was also in the back of my mind," she added. "I liked the fact the movie doesn't explicitly say it, but it certainly was. Having sisters, though we're not twins, there is this kind of sixth sense. Sometimes I know my sister is in trouble, and I'll call to ask, 'Are you okay? What's going on?' So [in the movie], feeling something is wrong is like a punch to the gut. My sister is not okay! She's out there, and nobody can tell me that I'm wrong because I feel it in my bones. It's a feeling you only have with somebody really close to you.

"There's a hint in the story of what they experienced as children," she continued. "Their parents died in a car crash, and sometimes with siblings, growing up everybody deals with [things] differently. But they take care of each other. No matter what. It's all they've known, and it's unconditional. In a sense [Jada] gets to know her sister better; rather than it being a betrayal, she learns why secrets were being kept from her."

The fact the film is based on a true story only added to her intrigue. "I didn't realize, or know, how closely it was based on the true story until a little bit after I read it and accepted it," she shared. "It happened in the '90s, and there wasn't any video footage that any of us could find on it. But there were periodicals written about it, and it's unreal in a way."

Ali was overjoyed to have shared the screen with co-stars Jasmine Guy and Carolyn Hennesy, who play the officers investigating the case. "Jasmine was just incredible, and I loved working with her," she beamed. "And Carolyn is hilarious. She’s so good! Like she’d actually piss me off in a scene sometimes -- like me, not just my character. The way she would come at Jada and the way she chose to do things, I really liked working with her, and I like her as a woman. She's very cool."

After her string of Lifetime Christmas movies in recent years, Ali was thrilled to tackle something dramatic. And while there are no plans to retire her Christmas hat anytime soon, she's hopeful that more Lifetime drama isn't too far off. "I'd love to do more dramatic work with [them]," she said. "I really like working for and with Lifetime. It's a great group of people and in my experience with them all the executives are wonderful people.

"Some of my first times working with them were as a brand-new mother," she added in closing. "They're such a female-friendly group. Many of them are women. There were never qualms about me having to bring my breastfeeding baby to wherever I was working. Just being able to be your whole self in the place you are employed is a dream. They're incredibly supportive in all those personal ways, and professionally. That makes a big difference for me."

Vanished: Searching for My Sister will be telecast Saturday, January 22 at 8 p.m. on Lifetime.