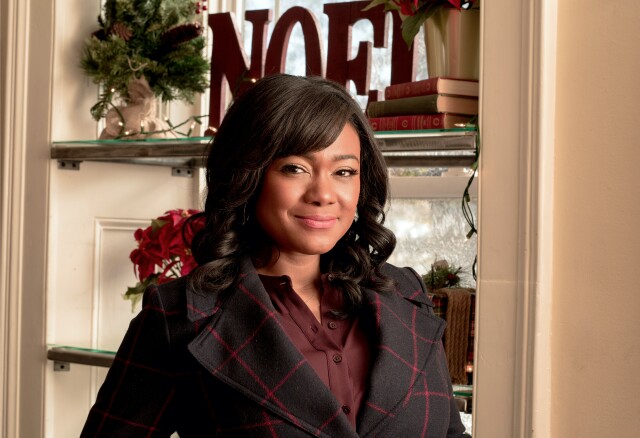 After a slew of all-new movies in recent weeks, Lifetime’s annual programming event, It’s A Wonderful Lifetime, draws to a close this Saturday with the premiere of Christmas Hotel.  Tatyana Ali returns to the network in the lead role, and she couldn’t be prouder to be rounding out the event.  “Closing out It’s A Wonderful Lifetime is very special,” she said during an exclusive interview with MediaVillage about the movie.  “I feel blessed and honored to even be a part of this programming event. They do so many cool movies and I love that this one is airing [so] close to Christmas.  I love Christmas movies because they are these wonderful romantic comedies, with lots of twinkling Christmas lights in the background!

“I also get to work with people I admire, like Jackée Harry, and in this one, Sheryl Lee Ralph and Telma Hopkins (who plays her mother),” she continued.  “They all helped pave the way, along with the producers I’ve worked with again and again that I adore, and with the network itself.  It’s just a fun intense ride and it gets me ready for the holidays.  I hear so much that people love these movies and I know why they watch them all day long [at this time of year].  We all do.  They’re fun and it’s nice to see something about love.”

Christmas Hotel  tells the story of Erin Roberts (Ali), a corporate mover and shaker at the high-end Wyndsor Hotel chain in New York.  With her sights set on a coveted position managing their upcoming Rome destination, Erin’s plans take a detour after she’s invited to open Wyndsor’s newest hotel in Garland Grove, a small mountain town renowned for celebrating the holidays year-round that also happens to be Erin’s hometown.  With the locals already furious and afraid that a hotel chain will erode local business, Erin finds convincing them otherwise is problematic.  And with Conner (Sean Patrick Thomas, pictured below with Ali), the brother of her childhood best friend, emerging as a major voice in the charge against the hotel’s opening, she finds it’s going to take every ounce of her ingenuity to change the minds of the townspeople.  Then she hits upon an idea:  Maybe turning the hotel into one that celebrates Christmas year-round could appease everyone! 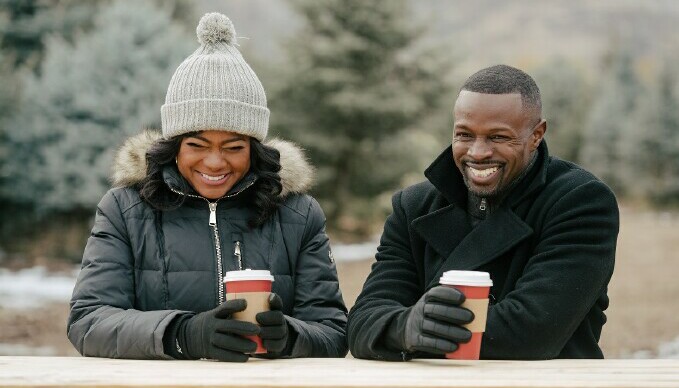 “I loved the idea the movie has of community, along with the idea of creating a Christmas hotel,” Ali explained.  “It showed the difference between the commercial version of Christmas and the holidays, which is something we all get wrapped up in and stressed out by, then it highlights the values [of the season].  It’s really one of the only times of the year where you can say, ‘I’m here with my family, or with friends,’ and that’s okay.  We’re all used to the hustle and bustle, so to just able to spend time together is why the season is so joyous.  I loved that this movie highlighted that.”

The film, one that marked the directorial debut of another Lifetime alum, Marla Sokoloff, proved to be special for Ali on many levels.  The actor had just given birth to her son Edward before production began.  “He was two months old when we started this,” she recalled.  “It was truly a wonderful experience thanks to the producers, the network, the crew and Marla, whom I love.  The whole thing was the way it should be for working moms.  I was very supported and because we filmed in the hotel we were staying at, in between takes or lunch I could go up to my room and see the baby.  My mom was there with me and my husband would fly in and out.  It all made the whole thing really special.

“Marla was amazing!” she continued.  “She’s a wonderful director and an incredible person.  She made the whole thing so much fun.  Being an actor herself, we had this shorthand.  All she had to do was say a few words and I knew exactly what she was talking about.  She’s also a singer, so we had a lot in common.  I’m always incredibly impressed by women who go after what they want career-wise but are also mavericks in a way and constantly evolving.  Those that are not afraid to jump into those spaces.  There are spaces I’d like to jump into but directing isn’t one.  With Marla, it was amazing to watch her do that while raising a beautiful family.  Balancing all of that was very impressive to me.”

Ali tells me her own holiday season will be one of rest with her family.  Having two little ones now means, “Lots of gifts under the tree, Christmas carols, and our three-year-old helping to trim the tree.”

On another note, she’s not ruling out the possibility of ever reuniting with her former Fresh Prince of Bel-Air castmates.  “So many shows are back, and I’d love if we came back,” she said.  “We lost James Avery, so we’d have to figure that part out, but just to work with everybody again.  I’m starting to feel like I should come up with an idea and pitch it.”