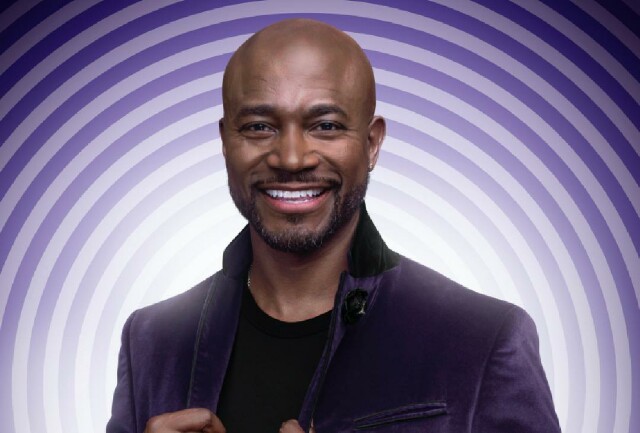 Three years ago, multi-faceted entertainer Taye Diggs decided to stretch himself professionally, and he did so by attempting something he’d never done -- being a game show host.  His first such effort, the wildly entertaining series Hypnotize Me, was at the time produced for the Fox network, but for reasons unknown the series ended up languishing in a vault, until now.  Tonight, it will debut on The CW, which has become Diggs’ TV home thanks to his starring role in the drama All American and his gig as host of the annual Critics’ Choice Awards, which is telecast in January live on the network.

“I was literally at the point in my life where I was I was feeling I should stretch myself and maybe step outside my comfort zone,” Diggs tells MediaVillage.  “I was thinking of roles when this [game show] opportunity came up.  [Having] young kids I’m aware of they can watch.  This game show came at the perfect time.  I hope they are going to be sitting down and laughing at what daddy saw, so I'm excited.”

Based on the U.K. series You’re Back in the Room, the show features contestants who, at the hands of award-winning hypnotist Keith Barry, work together in teams to compete in challenges after being hypnotized.  The challenges range from simple everyday tasks like frosting a cake to blowing up balloons, however, while under hypnosis the mundane and routine tasks become quite the challenge for contestants as their deep-rooted personality traits spring to the surface.

Going into the project, Diggs had expectations, but he wasn’t ready for exactly what transpired during production.  “I'm really surprised by how surprised I was,” he laughed.  “I was one of those people that always said they believed in hypnosis, but when I'm on stage watching it happen with four different people, I'm still amazed with the fact that it's happening.  I'm also amazed that more people are using it for therapeutic reasons.”

And hopefully not for evil.  “I hope that doesn't happen,” Diggs joked.  “But maybe people are?  I've heard with certain governments that is a real thing.  I hope they focus it on positive things.”

Diggs also revealed he was so fascinated by the subject that he did allow himself to be hypnotized during production.  “Keith hypnotized me, but not to the point that people are going to see on the show,” he revealed.  “And not to where I'm running around quacking like a duck or barking like a dog or dancing badly.

“I had some nerves before doing the show, so I asked Keith if he would be into taking me under and telling me I'm going to be fine and relaxed?” he continued.  “He did that and I had a really great first show, which for me was huge because this [was] something I just stepped into and with which I had no prior experience.   Being an actor helps with things like the auto prompter and improvising with people, but not things like lights in the live audience.  It's really a three-ring circus.  Once he allowed me to relax and be in the moment it was a real experience.”

After a long and successful career, Diggs feels “really blessed.”  He’s also hopeful that in a time when all of us could do with a good laugh, Hypnotize Me will deliver.  “[The show] is coming at a really good time.  Hopefully we can take some of the emphasis off the horrible stuff that's out there and giggle a little bit with our families.”

Hypnotize Meis telecast Wednesdays at 9:00 p.m. on The CW.