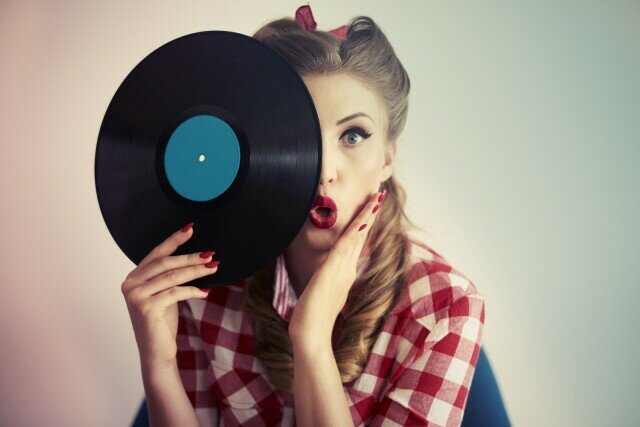 Nearly six months after Taylor Swift's latest album "Evermore" debuted at No. 1 in December, it was languishing down at No. 74 in the Billboard charts -- before it suddenly shot back to the top in one week!

Why the sudden, huge bump? The vinyl version of the album had just been released. Any orders for the LP version suddenly counted upon the fulfillment, and Swift, who is used to setting new benchmarks, helped set another: Its 192,000 copies sold set a record for weekly vinyl sales in the modern era.

Twelve-inch vinyl albums were for decades, of course, the standard commodity for recorded music, with million-selling heydays in the 1970s and '80s. But music buyers ditched its lavish packaging and fidelity for formats considered more portable – first cassettes in the '80s, and then compact discs in the '90s. CDs remained the dominant physical product, while streaming services grew as an even easier way to hear the latest hits.

Eventually considered worthless (at least at used record stores that were offering pennies on the dollar for once-beloved titles), vinyl LPs were no longer carried in bigger department store music racks that became devoted solely to CDs. Vinyl for a time became strictly a boutique item, embraced by collectors and hi-fi purists, but was largely left behind by the pop mainstream -- especially when streaming turned music into something less bought and owned than turned on and off like a faucet.

As interest slowly returned, albeit to a limited degree and additionally fueled by younger Millennials and Gen Z looking for something "new," vinyl sales increased annually through the last 15 years. Major labels got back on board, in part because top artists insisted on having a vinyl presence, as well. Last year was the biggest single year for vinyl sales in the 30 years since Billboard revamped its tracking system, with 27.5 million copies sold.

According to the latest figures from MRC Data, which provides tracking for Billboard charts, the vinyl LP now accounts for nearly half of physical recording sales -- up 97.5 percent over last year alone at 14.2 million. Year to date, CD sales are at 14.4 million and climbing.

But LPs overtook CDs in dollar sales last year for the first time since the '80s, in part because the fancy packaging and colored vinyl commanded prices nearly twice as high. Swift's bestseller, for example, retails for $29.98.

Those who do venture into big box stores may be shocked to see CDs replaced by far more vinyl records in places from Target to Walmart, with features they once offered with discs -- extra tracks, fancy packaging, etc.

But proof of vinyl’s ascendance could be seen in the long lines June 12 for the first Record Store Day of two this summer, a coordinated effort among 1,400 independent stores in the U.S. since this initiative began in 2008 with 3,000 stores worldwide, according to founder Michael Kurtz.

Once an annual summer event -- with a Black Friday reprise -- it was split into three different days last year to respond to the pandemic -- with scores of exclusive pressings available divided among them to help cut down crowd size.

"The reports I’ve seen [say] that it exceeded the Record Store Day from last year," which was the biggest ever, Kurtz notes of the June event. Paired with the upcoming second event July 17, he expects sales to top 700,000 this year. "It's a beautiful celebration," he says.

Fans will return in July for exclusive items like the limited 12,000-copy release Foo Fighters LP, "Hail Satin," that will be half live and half Bee Gees covers. "It will be a unique, big buzz item," Kurtz asserts.

Last year's pandemic may have slowed production, but sales actually accelerated during the lockdowns, says Larry Jaffe, a co-founder of the Making Vinyl conference.

"The pandemic in a strange way has become a blessing for the industry," Jaffee said. "Everyone is saying sales have increased dramatically, which was totally unexpected, over last year. Because you're spending so much time at home, and you can't go to live performances, they're looking for something different."

Vinyl's comeback may have gotten a kickstart with classic rock titles and reissues sought by older fans, but Jaffee says one of the most promising things about its future is that the top five albums in sales so far in 2021 have been from artists who appeal to the young -- Harry Styles, Kendrick Lamar, Swift and Billie Eilish, whose forthcoming double album "Happier Than Ever" is getting a lavish LP rollout July 30 -- and a $34.98 retail price (more for colored vinyl).

That Swift's album got so many vinyl sales wasn't an accident, Kurtz says. "Taylor has done a lot, in the background, underneath the radar."

She has seeded record stores with autographed copies of her album, "and I'm talking tens of thousands of them," he adds. "Then she tells her fans to go out to the stores and buy them to support the stores. That's really been incredibly successful."