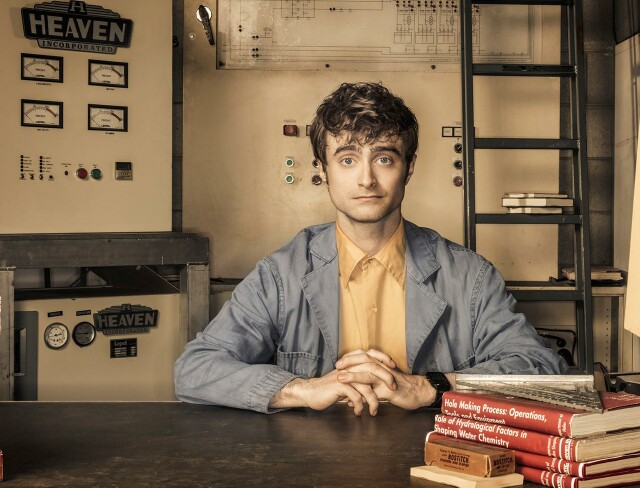 For British actor Daniel Radcliffe, finding his latest television project, TBS's Miracle Workers, was easy.  In fact, it found him.  "How this really started was, I wanted to work with Simon Rich," he told MediaVillage in a recent interview.  "I'd read his book (What in God’s Name?) and contacted him to say if anything ever becomes of it, I would love to be involved in whatever capacity you would have me. That started us talking and here we are."

In the heaven-set workplace comedy, Radcliffe stars as Craig, a well-to-do angel working in the Department of Human Prayer.  With God (played by Steve Buscemi) undergoing a mid-life crisis, He decides to throw in the towel, close Heaven, Inc., retire, blow up the planet and pursue other interests.  Desperate to save earth, Craig and his co-workers must unite one couple in a kiss, and while on the surface it sounds easy, Radcliffe explained that it's not.  "They have two weeks to get these humans to kiss or the world explodes," he shared. "But these are two Millennials who take forever to figure it out."

For Radcliffe, the offbeat nature of the subject matter was what initially attracted him to the project, along with getting to play in an admittedly abstract workplace comedy.  "Working with Ricky Gervais on Extras was amazing," he said.  "The Office was a huge part of my [life] growing up.  I respond to comedy, particularly when it's clever, and I feel that the world that Simon creates in this is so complete and lovely.  It’s crazy and chaotic, but there's a warmth and kindness to his writing that I think is different from what I've done before."

Despite the setting, Radcliffe is adamant Miracle Workers is by no means a commentary on religion.  "It's about relationships and dynamics within the workplace," he shared.  "And while dark, it has some really funny stuff in it.  I personally don't believe in heaven, so I guess for me if it existed it would be great, certainly a surprise, but on reflection, I would not like to have the God that Steve plays.  That would really worry me.

Radcliffe is also a producer on Miracle Workers. “This is the first time I've been involved in a project from such an early stage,” he said.  “One day I would love to direct, though not necessarily on this project."

While the world may well come to an end on Miracle Workers, life for the former Harry Potter star is good.  "I'm enjoying life and this job in particular," he said with a smile.  "I'm having so much fun I can't possibly call this work." He also credits his cemented place in pop-culture history, thanks to Harry Potter, as one reason for his perpetual happiness.  "People are so nice about it," he noted.  "Generally speaking, no one is ever a dick."  Should he ever desire anonymity, he has the perfect disguise.  "I'm 5' 5" … I can throw on a baseball cap on, and most of the time people don't recognize me," he laughed.