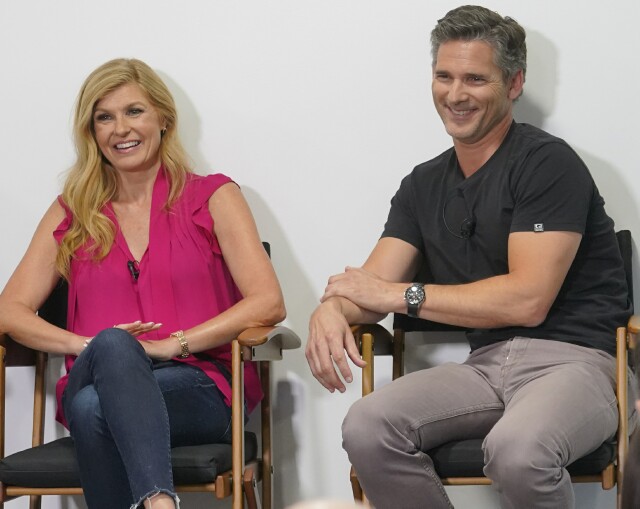 Beverly Hills, CA -- Connie Britton, smart, sexy and confident, does not look like the type of woman who could be duped.  But as the final panel of the Summer 2018 Television Critics Association Tour unfolded on the Universal lot, Britton assured reporters that even a self-made millionaire could easily be fooled when it comes to wanting to be loved.

In Bravo’s upcoming Dirty John, Britton (pictured at top left) plays Debra Newell, who falls for a dangerous stranger, John Meehan, portrayed by Eric Bana (top right).  This may sound like the set-up for a sappy movie but it’s a true story and a cautionary tale of our times. Newell, an interior designer with four failed marriages, sought love on an internet dating site for those over 50.  She met Meehan, who presented himself as a doctor, Christian, and all-around great guy.  He was anything but.

Her daughters had their suspicions about Meehan … and Newell’s nephew investigated him.  Turned out there was plenty to investigate, including a past that did not seem right, an ex-wife and a trail of women whom he had manipulated and bilked out of money.  Eventually her family unraveled his web of lies, and Meehan tried to kill one of Newell’s daughters.  Instead, the daughter killed Meehan in self-defense.

These are not spoilers, as the details of this story have already been played out in the media.  Dirty John will be an eight-episode series on Bravo, based on the tireless reporting of Los Angeles Times writer Christopher Goffard.  His podcast about it was extraordinarily popular and was downloaded over 10 million times within six weeks of its release.

Coincidentally, Britton’s friends were chatting about the case and the next day her agent e-mailed her about it, telling her to read the articles.  “I was like, ‘That's so crazy,’” she told reporters.  “I have to admit I was already sort of swept into it just by sheer hearsay before I even listened to it because I was listening to my friends and people around me who had already been caught up by it.  I was immediately excited to read the articles and listen to the podcast, and I just loved it.”

Filming was just beginning, so no preview clips were available yesterday, but Bravo allowed reporters to walk through the set of Newell’s home, an interior designer whose personal taste was modern and simple, with a sunburst mirror over a white marble fireplace and fuzzy accent pillows.  The premiere date has yet to be announced, but Bravo already gave the show a two-season order.  Executive producer Richard Suckle says they are figuring out what that second story will be.

For the first season, the story revolves around Newell, who wanted to believe in love and made excuses for her daughters’ concerns about this man.

“The way we’re telling it, the daughters are kind of relevant right away,” said Alexandra Cunningham, showrunner and executive producer.  “They were reacting to what was happening, that the romance was a whirlwind.  Everything was happening very quickly and getting serious very quickly.  And they had opinions on that.  One of the things that intrigued me about that was why were they not reliable?  Why were they not listened to?  If my mother met someone on Plenty of Fish and I said, ‘I really don’t like that guy, he gives me the creeps, don't go out with him,’ my mother would go, ‘Oh, okay then, never mind.  I'll lose his number.’  In this story, what is the history between this woman and her daughters that means that she’s going to stick to her opinion, that they have their opinions and why are they not listened to?”

Britton spent time with Newell and came to like the woman and glean a deeper understanding of her and how her life took this dark turn.  Bana had to rely on the material to inform his slain character.

“Whilst there’s a lot of factual information about John, I actually find him really mysterious,” Bana revealed.  “So there’s a lot of stuff about him that I don’t want to know, because ultimately, when you’re dealing with something that’s based in reality, you can either choose to do something that’s 100 percent traceable to the exact facts of how they were, which can potentially be a little bit boring to watch, or you can try and come up with something that has a sense of that person, that might be more interesting.”

Given the tremendous interest in this case, it’s a brilliant move to go from articles to podcast to series.  What happens is well known, but it would be too pat to present Meehan as a cad from the start.  Why would Newell fall in love with him? How would the conflict arise?  How can someone so smart be taken in?

“At the start of the production, I would walk around the production office and tell the whole crew, ‘I love John.  John’s a great guy,’” said Jeffrey Reiner, executive producer and director.  “If we know from the get‑go that he’d be smarmy or icky, then we don’t have a show.  I really do hope that by the first episode people are going to root for this couple to work, because there is this incredible chemistry between them.  Through Connie’s characters eyes he comes across as just a fantastic, loveable guy.”

The trick, of course, was in casting the right actor who could play convincingly loveable with a hideous, hidden core.  “You need somebody who can bring that kind of sense of good‑natured joy, giving her something that she needs,” Reiner explained.  “And then, later on the real Dirty John rears his head.”