TCA: Getting to Know Rooster Teeth 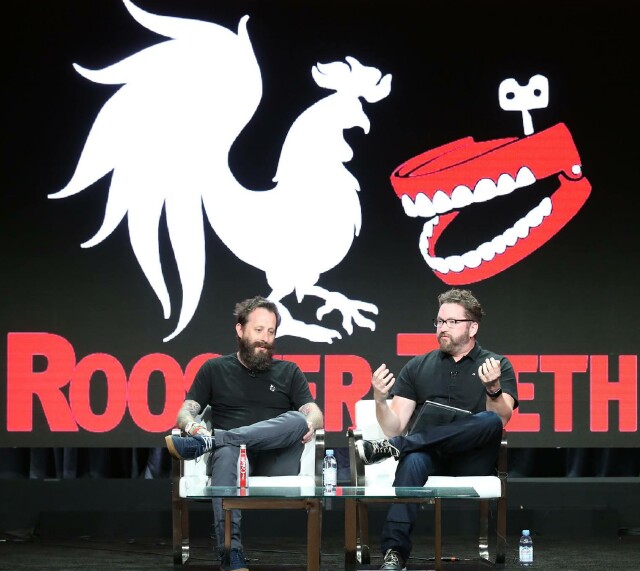 Beverly Hills, CA -- It’s no secret how much independent content creators have been changing the face of entertainment in recent years, from vloggers and social media influencers to independent production companies and streamers of all sizes.  One of the biggest game-changers you may never have heard of is Rooster Teeth, an Austin-based entertainment and media company founded in 2003.  Interestingly, much of the Television Critics Association membership had never heard of it, either, until the company made its TCA tour debut a couple of days ago.

“We are definitely not traditional television, and we are not even really one of the bigger streaming platforms that are out there,” said co-founder and Chief Creative Officer Burnie Burns (pictured top right).  “What we are is a company that has been producing online content for a paying audience for 15 years and counting.”

Rooster Teeth’s flagship series Red vs. Blue is the longest-running digital series in history, soon to conclude its sixteenth season.  “We put up the first episode; we got about 3,000 viewers on that first one,” said Burns.  “By the end of the month, by our food urth episode, we had a million viewers a week watching the show, which for 2003 was unheard of.”

At the time that Rooster Teeth launched YouTube had not been created, which meant the RT team had to host their downloadable episodes themselves.  “In our first month we got a bill for $13,000,” Burns recalled.  This led to the RT team starting to sell merchandise to help fund their operation and soon after creating a sponsorship option for their many registered website users, which is similar to the way many independent creators now use services like Patreon.

“We knew that people would turn up to watch our episodes every Friday,” said Geoff Ramsey (pictured top left), co-founder of Rooster Teeth and executive producer of “all things gaming,” as he puts it.  “We had no idea if they would support us financially in any way.  I think that [first] day we made $50,000 in $10 donations.”

On its YouTube channel Rooster Teeth has amassed over nine million subscribers and more than three million registered website users.  They have had over 150,000 attendees at their many live events in Austin, Texas (where the company is headquartered) and around the world.

For 2019 and beyond, the company plans to invest more in original content.  The massive success of their first original anime RWBY (pronounced like “ruby”) led to their newest anime project, gen:LOCK.  “When we settled on gen:LOCK as our next big RWBY-style animation, we knew that we wanted Michael B. Jordan as our vocal lead,” said Burns.  “He’s a huge anime fan and we're all fans of his at the company.”  Jordan joined the project (as vocal star and as a producer), as did Dakota Fanning, and just hours before their executive session at TCA David Tennant also came on board.  gen:LOCK is set for a January 2019 release.

In addition to their animated series, Rooster Teeth’s website and YouTube channel also feature several podcasts, videos, short films and long-form content, including the Let’s Play series, which consists of videos of people playing video games that can last for hours.  They also produce feature films for theatrical release.

When asked if the shrinking attention span of young audiences may affect their metrics, Ramsey replied, “With Achievement Hunter [the gaming division of RT] specifically, we make about 15 hours of edited content a week that we release.  And if we release 14 hours one week, they let us know.  They want that other hour.”

“Episodes of [Dungeons & Dragons] are three hours long, and people will watch it,” Burns noted.  “We have all these metrics that show us when people finish watching a show and whether they make it to the end of the episode.  The No. 1 piece of feedback we get from the audience is more.’  They want more!”