TCA: Inside The CW's "Dynasty" Reboot 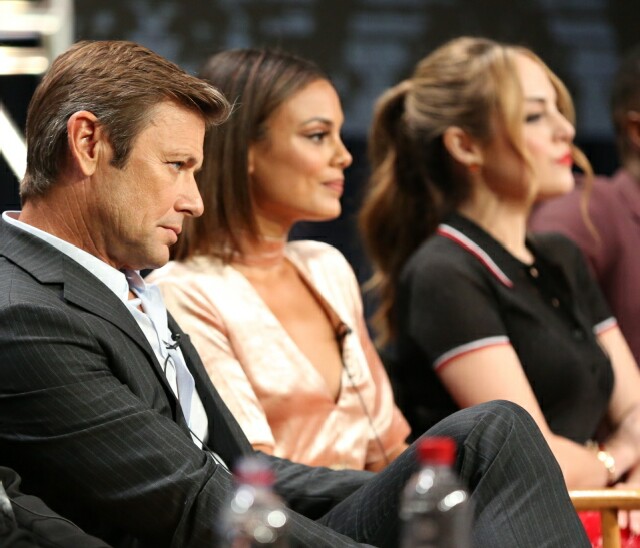 Beverly Hills, CA -- Josh Schwartz, Stephanie Savage and Sallie Patrick -- the executive producers of The CW's upcoming Dynasty reboot -- appeared during the network's day at the Summer 2017 Television Critics Association tour to introduce the show and explain their decision to re-tell the classic story of the Carrington and Colby families rather than tell new tales about the descendants of the original characters.  Unlike The CW's recent reboots of the Aaron Spelling classics 90120 and Melrose Place, in which new young characters interacted with characters from the original shows (played by the same actors), the creators of the new Dynasty have rather shockingly recast every role, reworked every character and truncated much of the storyline from the original's first season into its pilot.  Followers of the original series that ran on ABC from 1981 to 1989 had hoped that The CW might go the route of TNT’s 2012 Dallas reboot, which faithfully combined stars and characters from the original show with the younger Ewing offspring, furthering the legacy of the original series. Sadly, that’s not the case.

“We wanted everyone to come into the story clean,” Schwartz explained to me after the Dynasty panel.  “So whether you had never seen the original, weren’t born when the original aired or you were a fan, you could watch this.”  (Pictured below, left to right: Executive producers Josh Schwartz, Stephanie Savage and Sallie Patrick, and stars Grant Show, Nathalie Kelley, Elizabeth Gillies and Sam Adegoke.  Show, Kelley and Gillies are also pictured above.) 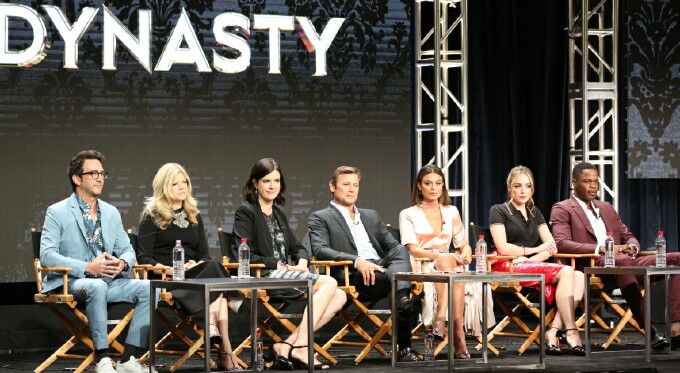 “We love the architecture of the original series,” Savage added.  “[Given] the fact that there were 240-some episodes that were all chapters of this beautiful book, it didn’t seem right to push that aside and create some children and grandchildren and tell our own story.  We wanted to honor the heritage of that story as it had been told.”

Wait.  What?  The original Blake Carrington (John Forsythe) and his second wife Krystle (Linda Evans) had a young daughter, Krystina, and Blake's daughter Fallon and son Steven -- from his first marraige to the scheming Alexis, played by Joan Collins -- gave him Carrington grandchildren.  So the stage was set for a genuine continuation.  No pushing aside of established history was necessary.

If it is any consolation to franchise purists, Schwartz and Co. said some actors from the original may appear in the reboot, albeit in different roles. “There is a chance someone could fit into the scheme of things in a way you wouldn’t expect,” Schwartz teased about the possibility of original stars appearing in cameos.  “Those conversations are early but we are always looking at ways to honor the original.”

“Easter eggs for original fans are important to us,” added Savage. “Each of the episode titles is a quote from the original show, and we try to do little echoes -- like in the original, Fallon wore a black and white dress to the wedding, so we found a similar dress.

“But you won’t see any of the original cast in their original roles,” she continued.  “Hopefully there will be the opportunity to bring someone back in a different context.”

Savage also told me that a couple of original cast members have reached out to express their excitement about the reboot.  Coupled with the fact that original series creators Esther and Richard Shapiro (who are also involved in this new version) still have wonderful relationships with many of the original cast members, it seems anything can happen.

With nine seasons of original source material to mine from, the producers of the new Dynasty do intend to use nuggets of the original while giving their updated characters new story arcs.  “The architecture of the original is in place but I think already we have made some choices in the pilot that launch us in an entirely different storytelling trajectory," Schwartz said. "[The death of one major player alone from the originals first series] turns it more into a who-done-it than a who’s doing it, although that is still a factor.”

Unlike the 1980s, the 99% has had its fill of the 1%, which could be a problem for a show focused on the latter.  But Dynasty’s creative team is hoping its slightly critical deconstruction of the world of excess will be enough to build an audience.  “Hopefully we are self aware enough that people won’t think they are having glitz and glamor shoved in their faces,” Savage said, adding that they intend to make “our 99% characters smart and scrappy with their own agendas.”

By the way, should anyone be wondering, Alexis will turn up on the reboot in one form or another.  "We’re building up the spirit of Alexis," said Patrick.  "She’s definitely alive, I think, in characters like Fallon, and we learn a little bit about her history and the family."

Dynasty will premiere October 10 following the return of Riverdale on The CW.