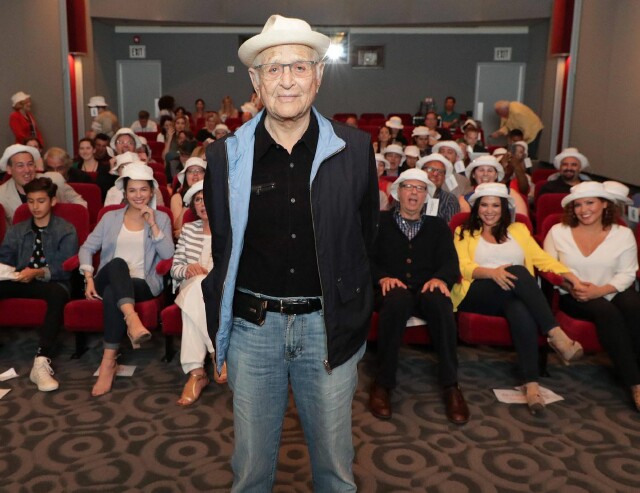 At 95 the indefatigable Norman Lear -- legendary creator, writer and producer of such television classics as All in the Family, Maude, Good Times, Mary Hartman Mary Hartman and countless others -- has injected new life into one his many past hits, One Day at a Time.  (Season one is currently streaming on Netflix.)  In a twist to the original, this modern day reboot centers on a multi-generational Cuban-American family -- mom Penelope (Justina Machado), a newly single Army veteran raising her two teenage children; recently out daughter Elena (Isabella Gomez); son Alex (Marcel Ruiz), and abuelita Lydia (Rita Moreno).  As in the original, building manager Schneider (Todd Grinnell) is also on hand helping the family navigate topical social issues in the way the Romano/Cooper family took on the challenges of the 1970s.  “Its great fun,” beamed Lear when quizzed about working on the update.  “I can't find the words to express how much I get from working with these glorious people, and I love this show.  They were all with me for my 95th birthday, my family, six kids, grown kids, some of them with their kids, and they all adore this show.  It's a great kick.”

Here’s another kick:  When Lear appeared at Sony Pictures Television's special TCA event to promote the show -- about a week after he turned 95 -- all attendees were given one of the signature hats he always wears, and once the hats were on, everyone sang “Happy Birthday” to him.

For Lear, the lack of multi-cultural, multi-generational families on television made the idea of reviving ODAAT for a new audience all the more appealing.  But the wheels were already in motion before he joined the project.  “This was not my idea,” he said.  “When it was brought to me, Sony was already interested.  I think Netflix might already have been, and Gloria and Mike know the true answer to that.”

The Mike and Gloria he’s referring to are not the Stivics from his first hit series, All in the Family (played by Rob Reiner and Sally Struthers, respectively).  They are Mike Royce and Gloria Calderon Kellett, the show’s executive producers.  The irony of working with a duo sharing those characters’ names is not lost on the legend.  “It's pretty much happenstance that turned into synchronicity,” Lear joked.  “It’s happenstance that I met Gloria first and the synchronicity is delivering.  That includes the entire cast now.” 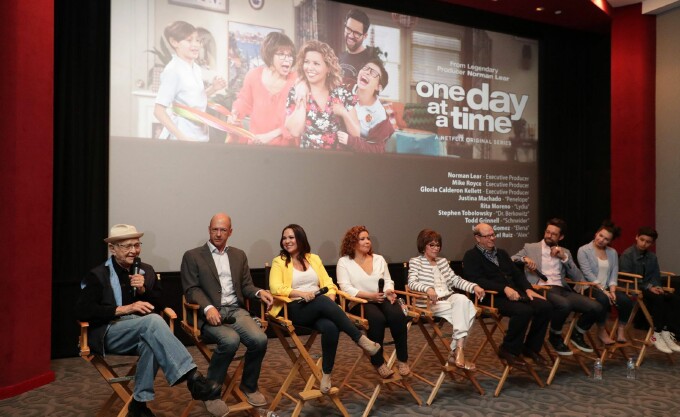 “The basic idea [was] to do a Latino reboot of ODAAT,” Royce explained.  The fact that Kellett is Cuban-American shifted the concept in that direction – something she happily admits to.  “Guilty!” she laughed.  “It works.”

Both admitted that the idea of updating a Norman Lear classic with Lear attached was daunting.  “It's horrifying,” joked Royce.  “But personally, I'm just happy I'm not the old guy in the room anymore.”

Lear is quick to give credit where due.  “Can I say 110 percent of everything creative in this show is the work of the two people who are leading it,” he asked.  “I visit; I am a guest here.  I love that everybody thinks it's my taste, because it is my taste, but it's their execution.  It's altogether them.”

“This is the kind of writing that Mike and I love to do,” added Kellett.  “Had Norman not done what he did, there's no way … I don't feel like we could have gone in and pitched this show and people would have understood it.  The moment you say, ‘Like Norman Lear,’ they go, ‘Oh.’  So it's all of the work that he did that allowed people to hear what we wanted to do and say, ‘Yeah, you are going to be crying half the time, but its good.’ We are very grateful to Norman's pedigree.”

With the show’s second season currently in production, Lear’s newest TV family will tackle political issues, something they steered clear of in the first season not knowing what the results of last year’s presidential election would be.  The 2018 release of season two will be tackling the issues of a Trump world head on.

“We are addressing them insofar as there's not a world where a Latino family is not dealing with the aftermath of 45 being president,” said Kellett. “It's just a different country, and so we are going to deal with it in that way.  How it would affect this family?  We are not going to deal with specific things because we couldn't talk about those specific things in the news, but there's an overall feeling and demeanor and change that this family feels, and it will definitely relate to all of our characters.”

One character who is particularly important is daughter Elena, who is gay and has a lot at stake in this new political climate.  Gomez would not reveal any storylines from season two, but she is thrilled by the positive impact her character’s coming out has had. “I've gotten a lot of young girls coming up to me saying, ‘Because of Elena, I feel normal, and I feel like I can come out,’" she said.  “It's so much bigger than me, and it's so humbling and beautiful to see.”

Season one of One Day at a Time is currently streaming on Netflix.  Season two will be released in 2018.