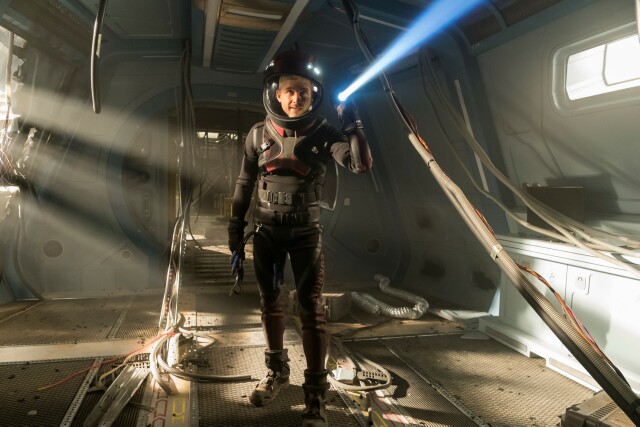 Beverly Hills, CA:  National Geographic’s critically acclaimed scripted/documentary hybrid series MARS returns in November, bringing with it some timely and important social commentary.  At its core, MARS 2 poses questions about “exploration versus exploitation” as the human race, now colonizing Mars, is faced with repeating the same mistakes that slowly decimated Earth and sent its inhabitants in search of alternate sustainable planets.  In what can only be described as fortuitous timing, Nat Geo presented a panel for the series during its afternoon at the Summer 2018 Television Critics Association tour within 24 hours of breaking news reports that bodies of water were discovered on the red planet.

Coincidentally the series also tackles the same discovery.  With private corporations providing new funding for the accelerating space race, questions about the best way to market this new discovery and the potential costs of doing so are raised.  Could they be the same costs Earth has been forced to endure for years?  “The topic really came out in conversations about the show as we talked with the big thinkers,” series star Jeff Hephner (who plays Commander Kurt Hurrelle, pictured at top) told MediaVillage in an exclusive interview following the TCA panel.  “It’s only been in the last 100-150 years that we have behaved this way.  Up until that point, humans behaved sustainably on this planet.

“I had never thought of that,” he continued. “I thought we were always assholes, so the debate lends itself to this and this is where we end up in the talk.  Everyone is fearful, yet self-aware, of human behavior and its consequences.  If we are projecting this into this new Earth (Mars) will or won’t we do it again?  Is it a good thing or a bad thing?”

Hephner is aware that without fossil fuels human existence would be vastly different, and sees the positive and negative effects, but the costly exercise of inhabiting a new planet may well be better spent fixing what’s broken at home – a subject broached in the series.  “A lot of people just want to start over,” he explained.  “But should we?  I’m not sure where I stand on it as there are times I believe [we should] take the trillions of dollars and spend it here, make [Earth] better, but that doesn’t seem to be human nature.”

The actor credits Thomas L. Friedman’s book The Earth Is Flat, with its thesis based on the spread of capitalism along with humanity moving away from its source, as a major eye-opener.  “It’s like if you are in a small town and you don’t like it, you go to the next town and impart your views,” he explained.  “It’s the same with parenting styles; you strive to do better as it’s a human impulse to not repeat history.

“I love that about this show,” he added.  “Seeing the big thinkers [working on the show] argue about it is exciting as great points are made and it’s optimistic and hopeful in theory, but also dark and scary in practice.  This show opens things up for that.”

According to Hephner, all six episodes of the new season are shot, and over the course of the season these themes are heavily explored while opening the door to a third.  “There’s a lot more story to tell,” he shared.  “No new technology has been invented.  The announcement about the water discovery was made and we predicted it [the season was completed last September].  We didn’t know that was going to happen.  I think that lends itself to an exciting future and something hopeful.”

Just being a part of the conversation for Hephner is a joy.  “The reality feeds the story and I believe it strengthens the show,” he smiled.  He said he would pass on the opportunity to become a space pioneer.  “I don’t want to be the first one there, I’m fine, but put me on the team to fix what’s broken.”