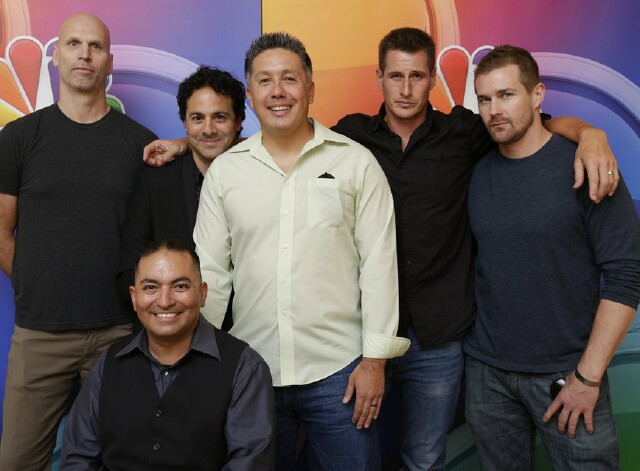 The character Josh Kelly plays this Thursday on NBC’s The Night Shift -- a United States senator and war veteran who is injured after violence erupts during a protest at a funeral service honoring a gay soldier -- couldn’t be more different from that of combustible cameraman Jeremy Caner, his role on the Lifetime drama UnREAL.  It is, however, one that is very close to Kelly, an army veteran who served in Afghanistan and Iraq before he began acting.  But that's not the only reason Kelly came to TCA to talk about this particular show:  The episode was written and directed by and features in guest roles veterans from many branches of the United States Armed Forces.  This is an important piece of television, as it sends a heartfelt message of thanks to all veterans for their service while also calling attention to issues involving PTSD and the medical bureaucracy many returned service men and women have to deal with. (Pictured at top, left to right, are series creators and executive producers Jeff Judah and Gabe Sachs; episode writer and Army veteran Brian Anthony; series star Brendan Fehr and Josh Kelly. Front: military advisor and Army veteran Toby Montoya.)

Kelly was a Ranger in the 3rd Branch battalion.  “I served for four years, 2000 to 2004,” he recently told me.  “[I had joined] before 9/11, so I didn't know that was going to happen.  I wanted to be the best, so I joined the Ranger battalion."  It was while serving in the army that Kelly realized the impact entertainment had on him and on the world around him.

“We were in the first deployment of people after 9/11 in October, and they didn’t have recreational tents set up yet,” Kelly revealed.  “There was no TV or movies so it was up to me to kind of entertain.  Finally we set up projector and we got to watch A Night at the Roxbury after two months of literally looking in homes for Osama bin Laden.  That was probably the best two hours of our lives and it really put everything in perspective.  If I hadn’t been through the military I would never have really understood and appreciated how valuable entertainment is.  I have buddies that are still in the military and they’re like, ‘He used to be in Charlie Company!’  Entertainment is very important to me.

“It was [incredible] the way they dealt with these issues,” he continued.  "It’s an authentic military show and they care about making it realistic.” The storyline running through the series that deals with war is, he added, “the closest thing to M*A*S*H that I’ve seen -- and M*A*S*H was the closest thing that I’ve seen to war in my personal experience.  Light, light, heavy; light, light, heavy.”

Kelly told me it was no coincidence he was cast in this episode.  His Army past is no secret; in fact, his character in one of the Transformers movies (Transformers: Dark of the Moon), Stone, was named after a buddy of his who died in the line of duty.  “I think any opportunity to honor soldiers through entertainment is good,” he said.  “It’s nice to see shows like this that do things and care.” (Pictured below: Fehr, series star Eoin Macken and Kelly.) 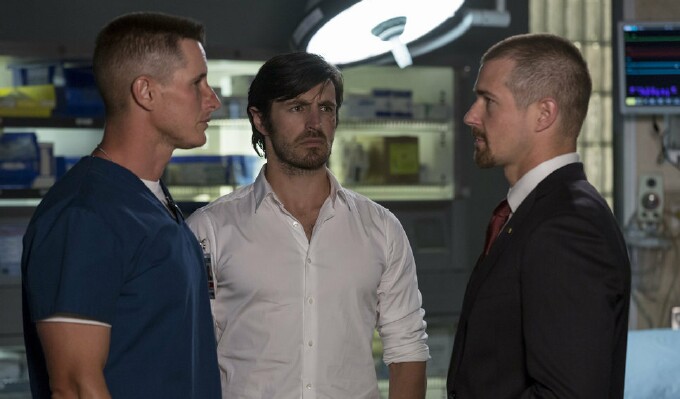 Next up for Kelly is the movie I Am That Man in which he plays a Neo-Nazi.  “Until UnREALa lot of casting directors thought of me only as a military guy,” he said.  (He also starred in Jarhead 2.)  “But in this one I had to shave my head.  It’s fun playing a crazy bad guy with tattoos, which is something a lot of the time people don’t see me as.”

Kelly still laughs about the giant billboard erected two years ago on Sunset Blvd. at the time that UnREALpremiered onwhich he appeared completely naked, his modesty protected only by a strategically positioned iPad.  “That was cool!” he said.  “It’s not like I need to see my name in lights, but it does make you feel like you’re going in the right direction when something like that happens.  It’s nice to have reminders of milestones.

“I did take a picture of it and posted it online with the comment, ‘What kind of dweeb takes a picture of himself in front of his billboard? This kind of dweeb!” he recalled.  “I celebrate every role because when you stop celebrating the small victories, you’re going to lose sight of what any kind of victory is.  I always think, 'What would little Josh say if I weren’t to celebrate?'  No, it’s awesome, this is amazing and this project was amazing.”

The Night Shift is telecast Thursday at 10 p.m. on NBC.