TCA:  “One Day at a Time” Panel Offers a Lesson in Colorism 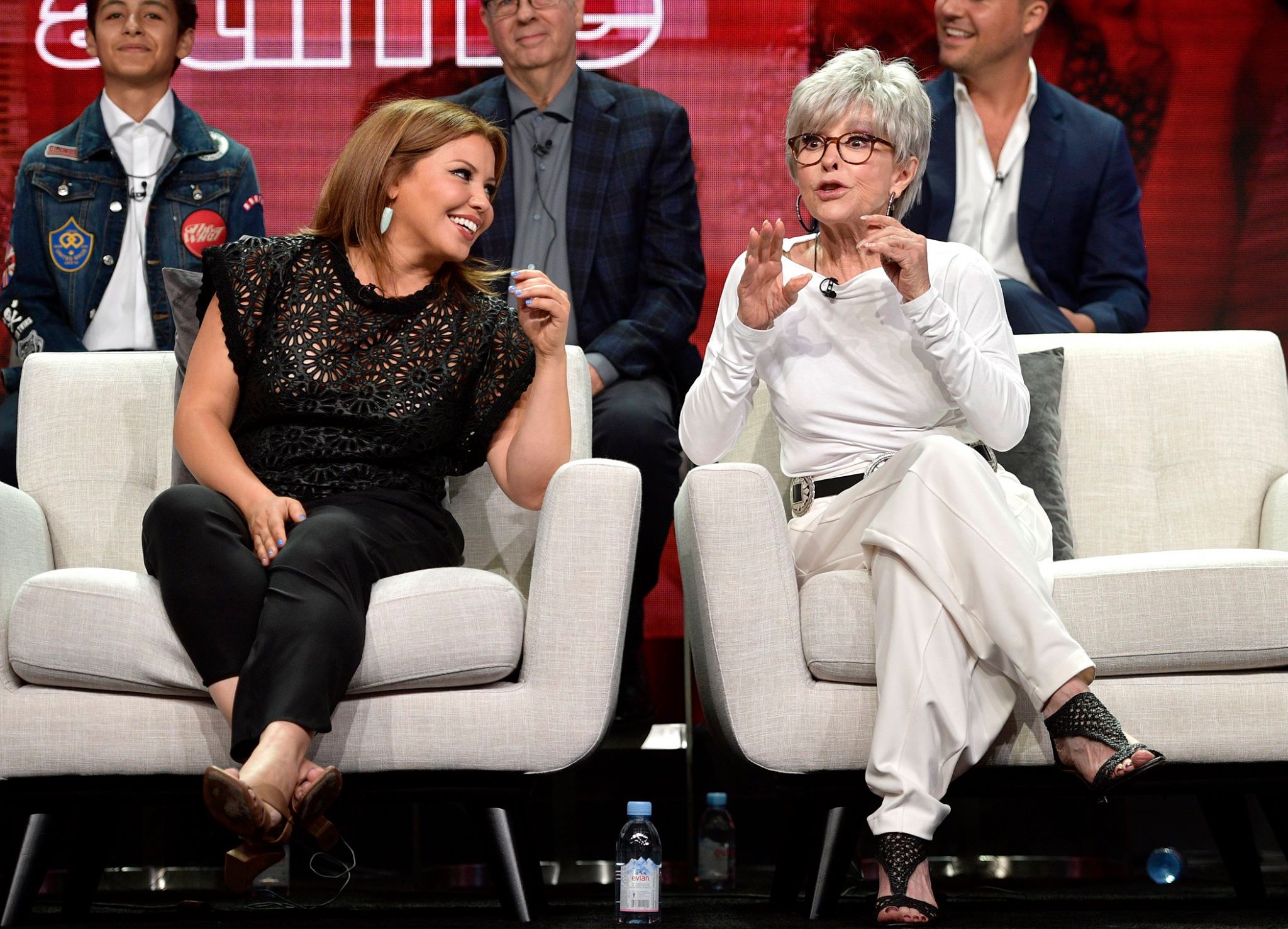 Beverly Hills, CA -- One of Netflix’s most beloved series among critics and audiences alike is the reboot of Norman Lear’s classic ‘70s sitcom One Day at a Time, now in production for its third season.  The original was centered on a single mother and her two daughters living in Indiana.  The revival relocated the story from Indiana to Los Angeles and focuses on former Marine Corps nurse and single mother Penelope Alvarez (Justina Machado, pictured top left) and her everyday life with her daughter Elena (Isabella Gomez), her son Alex (Marcel Ruiz), her Cuban mother Lydia (Rita Moreno, pictured top right), her loveable landlord Schneider (Todd Grinnell) and her boss Dr. Berkowitz (Stephen Tobolowsky).

“The only thing that related to the older show is the title,” Lear (pictured below, far right) said in a panel for the show during Netflix’s day at the Summer 2018 Television Critics Association tour.  “What [executive producers and co-creators] Gloria Calderon Kellett and Mike Royce have done is entirely their own.  And so much of it is out of real life, which is Gloria who herself is Cuban-American.”

“So much of the writers’ room ends up in our show,” Moreno told me during the Cuban-themed luncheon with the cast on the Beverly Hilton rooftop terrace that followed the panel.  “I’m basically playing Gloria’s mom.  We have the same hairdo and that very same wig.  We see her mother there every week.” 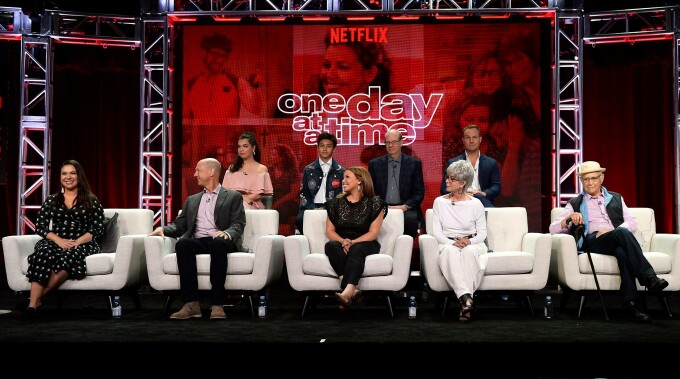 During the panel Moreno recounted a real-life story she recently read by a young journalist whose mother attempted to get involved in local politics, adding that as the show moves forward she would like to see her character follow a similar path.  “I would love that for Lydia,” she said.  “She could get into a lot of trouble with her big mouth.  She’s not exactly tactful.  I think it would be hilarious if she ended up spending a night in jail.  She wouldn’t even be upset about that.  She’d just yell, ‘Where is my makeup?’”

The topic of colorism, which to many of the reporters and critics in the room was an unknown term prior to the panel, made for lively exchanges during the session.  “My brother is very dark,” Kellett said.  “He is this beautiful caramel color.  I was the ‘blanquita’ [light-skinned] one.  I’m very white-passing, so a lot of times people will say things about Latinos in my presence because they don’t know that I am Latina.  I thought, [the show] is a great opportunity to talk about it.”

“We’ll still be talking about it [in Season 3],” Kellett told me at the luncheon.  “We’ll do a little bit of stuff with it, but we feel that the colorism episode we did [in Season 2] really covered that issue for this moment.  I really wanted to see Penelope date a black guy and have that conversation.  We didn’t do it this season but it’s something I would love to do because I want to talk about it.  I want to talk about what’s wrong, that we [Latinos] are being otherized and then we are otherizing others.  It’s insane.”

“Whenever Ariela Barer [the actress who played Carmen in the first season] and I would talk about the industry, she would ask, ‘Have you faced racism?’ and I’d be like ‘No, I haven’t,’” recalled Isabella Gomez during the panel.  “And then I read that script [about colorism] and I was like, ‘Oh!  I’m white-passing!’  My entire life makes sense now!  It’s a good teaching moment for people that aren’t aware and ignorant about that kinda stuff.  It was good to put in the show.”

“A lot of the stuff that I did in the second season, I was even going through in school,” said young Marcel Ruiz.  “I moved to L.A. from Puerto Rico six years ago.  I didn’t know any English.  A bunch of people in my school would think that Puerto Rican, Mexican, Dominican were the same thing!  I would spend like five hours trying to just to explain to them, ‘No it’s not the same!  We have really different cultures and different accents, different food!’”

One of the last topics discussed at the panel (that later picked up some momentum on Twitter and other social media) was when the cast was asked about how their different cultural backgrounds effect their Cuban characters.  “The Cuban diaspora is very spread in this country because of how Cubans came here,” said Kellett.  “Where you live definitely influences you culturally.  In terms of how we are different, a lot of that is colonization.  My genetic DNA and Justina’s are more similar than my brother’s and mine.  We’ve done our 23andMes.  How it varied is when people started coming from Europe to over here.  [Justina’s] grandparents stopped in a boat in Puerto Rico.  Mine stopped in Cuba.  Others went to the Dominican Republic, et cetera.  So we are telling it through this particular lens, but they each have their own.”

“We’re actors and I don’t think that people necessarily ask that question to English or Australian actors when they come over here and they play American parts,” Machado declared.  “I may not be Cuban, and Marcel may not be Cuban, but we are actors who understand this world and this community.  I find that it is a very interesting question that is put to the Latinx community a lot when I don’t feel it’s asked of other communities.  We’re actors, and I think we’re doing a pretty good job of playing the Cuban Alvarez family, these three Puerto Ricans and Colombian.”