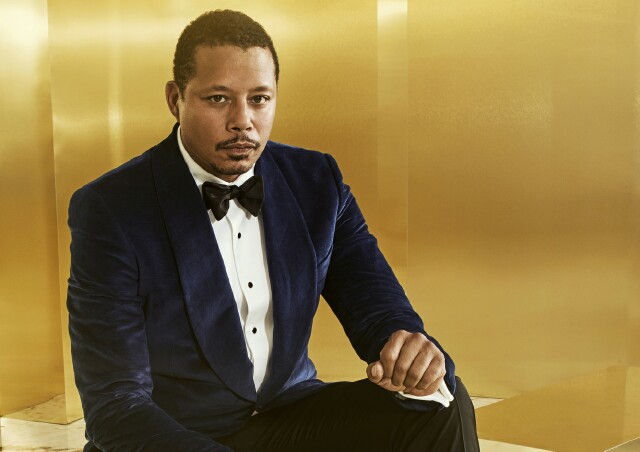 Beverly Hills, CA -- High above West Hollywood, a full moon rises as Terrence Howard finishes corn on the cob and chicken.  (Always eat corn on the cob raw, he advises, asserting that one will never again want it cooked.)  He relaxes in a corner of the posh Soho House, where Fox is closing its day at the Summer 2017 Television Critics Association tour with its annual all-star party.  It’s the sort of sleek place Lucious Lyon, the character Howard has played longer than any other, would appreciate.

Lucious is the patriarch of Empire, returning to Fox on Sept. 27 for its fourth season of music, madness and melodrama.  The Lyons family dynamics make The Sopranos look like The Waltons.  Howard, who has done Broadway, films and TV, never expected Empire would be a hit.

“I looked at it and said, ‘It’s not going to make it,’” he recalls of reading the pilot. “The father in the pilot is a drug dealer, wanting to become a rapper.  He throws his son in the garbage can, then beats his son with a broomstick and another son makes out with another guy.”

Being gay was a bigger stumbling block than dealing drugs, Howard notes, figuring that, at least in the beginning, Empire would attract a predominately black audience.

“The moment they show two guys making out, everyone will turn the channel,” Howard assumed.  “It was worth $125,000 an episode (his original pay).  I never thought it would get picked up.  Homosexuality within the black community is a taboo subject.  No way would my father have let me watch this show.”

Yet the show caught fire.  Its second season premiere event was at a packed Carnegie Hall, where fans lined the streets and paid to watch an episode.  “I was so surprised when we hit numbers of 24 million viewers,” Howard says.  “I know the majority were black people.  Now, we have grown.”

As has Empire, the fictional music company on the show.  There’s plenty of court intrigue with the sons plotting against the father.  Last season Cookie, played by the divine Taraji P. Henson, Lucious’ ex-wife, business partner and rival (it’s complicated), destroyed his offices.

Plot lines are intricate and stars drop in, such as Leslie Uggams playing Lucious’ mother, who makes Lady Macbeth seem cuddly.  Phylicia Rashad plays the imperious mother of Taye Diggs, who was Cookie’s beau.  Empireis steeped in loves and hates, mental and physical illnesses, and the sort of internecine battles that fueled medieval fiefdoms. 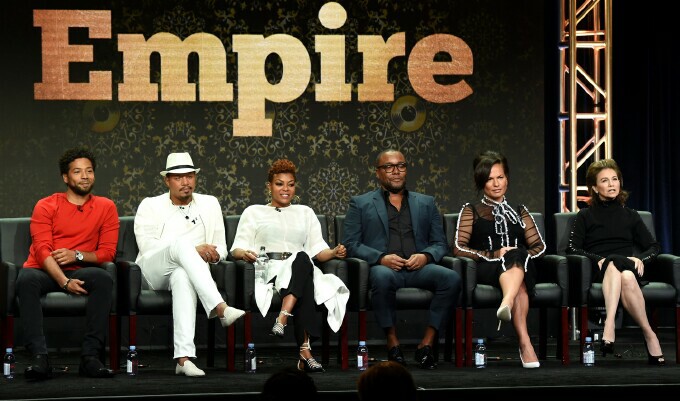 Devoted fans of the show handicap whose head will be on the guillotine next, and what rampage Cookie will go on, but not Howard.  He says he doesn’t meddle in the writers’ room.  Rather, he learns about the stories when they gather as a cast.

“I don’t read the script until the table read,” he says.  “I used to believe in preparing for a character for two to three months.”  Over the years, though, Howard found it more effective to react in the moment.  “I find I am more organized and I listen more actively and intelligently and I respond more instinctively.”

When the actors gathered for the first table read of the upcoming season they were so delighted with the script that upon finishing they broke into spontaneous applause, he says.  They were pleased by where the story went, but during a Television Critics Association panel earlier in the day, executive producers Lee Daniels (pictured above in blue suit) and Ilene Chaiken (far right, next to executive producer Sanaa Hamri) seemed more likely to give up a major organ than a spoiler.

Their reticence, however, couldn’t douse the genuine playfulness between longtime friends Henson (third from left) and Howard (second from left, next to co-star Jussie Smollett) during the session.

“I’m not competing with you, Terrence,” she laughed.

“I’m competing with you,” he countered.

While Cookie has gone from a woman who did 17 years in prison to reclaiming her executive role in the company and discovering other men, Howard does not see Lucious as growing, and likens playing him to being in Groundhog Day,an unusual assessment coming from an actor.

“I don’t personally see Lucious as evolving,” Howard says.  “Everyone saw him as a bad person.  He’s been dealing with emotional things, from him being emotionally orphaned at 9.  His mother tried to drown him.  What happened to him on the street?”

He contrasts Lucious with Brick, from the all African-American revival of “Cat on a Hot Tin Roof” in 2008.  “I learned something with Brick every day,” he says of co-starring on Broadway with Rashad and James Earl Jones.

Howard pauses and says very quietly, “I learned more in that moment than in any moment in my life.”  Jones, long a master of his craft, still turned to others in the cast, soliciting advice.  He would ask, “Do you have any ideas about this?”  Howard recalls. Now, Howard seeks opinions from the cast and crew.

One of Howard’s biggest challenges on set is keeping those famous green eyes dry.  “I try so hard not to cry in a scene,” he says.  “Lucious is still that little boy.  I hate playing the character.  He never has a good day.”

Brooding as Lucious may be, Henson cracks Howard up.  “I can be in the worst possible mood and Taraji will do something and delight me.  One day, she was reading online and it said ‘Taraji P. Henson is an icon.’  And she said, ‘Don’t look at me.  Look at the floor, bitch.  I am an icon!’  Half the time I am waiting to see what Taraji will do.”

Just the memory of that moment makes Howard chuckle.  He needs to head home; in the morning the cast starts taping the fourth episode of the fourth season, a tribute to Prince.

Howard considers Lucious’ future.  “I hope Lucious ends up in a happy place,” he says.  “But I know most of the time in life the things we are looking for are hard to find.  He made hard choices and he always does it for his family.  I think that makes him a hero.”