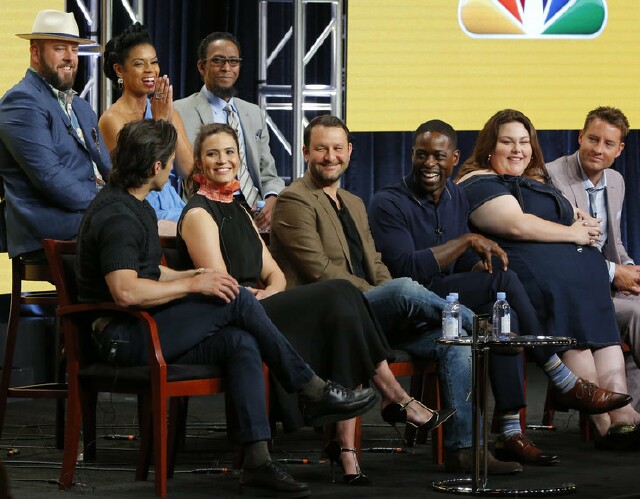 Beverly Hills, CA -- The creators and cast of NBC’s smash hit drama series This Is Us gathered at the Television Critics Association Press tour with the main focus of their panel being the show’s highly anticipated second season.  What we learned during the press conference:  The present-day storyline picks up on the 37th birthday of Kate (Chrissy Metz), Kevin (Justin Hartley) and Randall (Sterling K. Brown) -- one year after the pilot.  The past storyline begins the day after last season’s heated exchange between Jack (Milo Ventimiglia) and Rebecca (Mandy Moore).   In casting news, Sylvester Stallone will guest star, along with That '70s Show alumna Debra Jo Rupp.  We also learned the creative team behind the show is confident that the Emmy Award-nominated groundwork laid in the first season will continue.

“Regarding the pressure, we try and take it out of our mind,” series showrunner and executive producer Dan Fogelman (pictured at top, center, surrounded by his cast) told me after the TCA panel. “When I turned in that first script I did have that little bit of a pit in my stomach, but I thought we had done it and had got it, and I hope everyone likes it because there is a lot of expectation.

“I’m confident in this season,” he continued.  “The first season was pretty much a set up for the second, big storylines and big emotions.  It’s really good and I’m really proud of it.”

If the emotional clip from the upcoming season shown to critics during the TCA panel -- one highlighting a raw exchange between an aged Rebecca and adopted son Randall -- is anything to go by, tissues should be stockpiled now.

One major storyline of season one, the mystery of Jack’s untimely passing, will also be resolved in season two.  “We have a ways to go with that in the season and I just want to make sure we get it right," Fogelman said.  "It’s going to be a big thing that a lot of people will watch, so it needs to be as good as anything we’ve done and I think it’s going to be … it’s happening at some point in the season.”

Fogelman also has high hopes for Stallone’s guest appearance and is already touting potential honors for the actor’s contribution.  With season one of the show receiving 11 Emmy Award nominations, including one for guest star Gerald McRaney, he may be right.  “Sly appears in a period film that Kevin (Justin Hartley) is starring in.  It’s a war film so Stallone basically comes in as himself playing a character in the film that is kind of a mentor figure and starts bringing up stuff for Justin’s character involving Jack and his relationship with his own father.  There’s a great monologue for him about life experiences and loss, aging and the business.  It’s one episode right now, but who knows?  It’s a big part and he’s incredibly talented.

“There are a couple of other guest star in the works,” he added. “I think Dan Lauria, who was on my show Pitch, may be coming on along with Debra Jo Rupp.  We also have some big whoppers of plot twists coming that will take people’s feet out from under them.  I think were going to do that thing again that gets people talking.”

Season two of This Is Us premieres September 26 at 9 p.m. on NBC.