By Juan Ayala May 11, 2018 Upfronts/NewFronts Archives 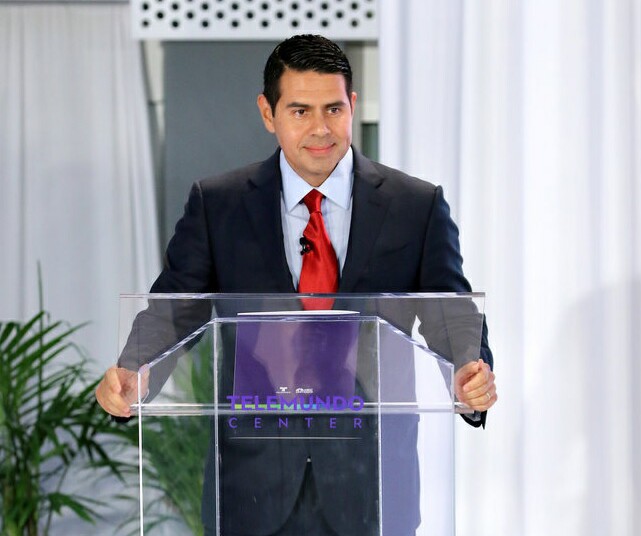 During an Upfront video press conference last week that originated at the new Telemundo Center in Miami, Cesar Conde, Chairman NBCUniversal International Group and NBCUniversal Telemundo Enterprises, spoke to reporters about the importance of programming that targets the young, growing and social Hispanic market.  “They are increasingly setting trends, influencing pop culture and becoming the new mainstream,” he said.  “We will continue to invest in contemporary, unprecedented original productions as well as native content and innovative partnerships across digital media -- premium, relevant and original across every platform, genre and language.”  (Conde is pictured above at the opening of the Telemundo Center.)

Telemundo’s commitment to robust content development speaks to the desire advertisers have to capture the attention of Hispanic consumers.  “Marketers who spend in Spanish-language TV are doing a disservice by not spending at least 50% of their budgets on Telemundo,” said Laura Molen, Executive Vice President, Lifestyle and Hispanic Advertising Sales Group, NBCUniversal.  “An increase in spends on Telemundo means in increase in reach with Hispanics.  All U.S. marketers should be reaching this very valuable audience.”

The network’s 10 p.m. “super series” have been massive hits among their audiences, especially the award-winning El Señor De Los Cielos, which just premiered its sixth season this week, ranking No. 1 across all networks among adults 18-34 and outperforming ABC and CBS among adults 18-49.  Other “super series” include Señora Acero, which has been renewed for a fifth season, and Enemigo Intimo, which premiered earlier this year and has been renewed for a second season.

Telemundo Networks President Luis Silberwasser announced the newest “super series,” titled El Baron Rojo (The Red Baron), which takes place in the ‘80s and follows Nacho Montero on his quest to become a prolific drug trafficker.  The highly-anticipated return of La Reina Del Sur (The Queen of the South) returns this year, starring telenovela superstar Kate del Castillo as Teresa Mendoza, Spain’s most powerful drug trafficker, who travels back to Mexico after nearly a decade to rescue her kidnapped daughter.

Among Telemundo’s 9 p.m. hour-long series, Sin Senos Si Hay Paraiso returns for a second season.  New series include Falsa Identidad (False Identity), about two strangers who must assume new identities as a married couple and live a false life in order to escape their abusive and criminal pasts, and Prisionero Numero Uno (Prisoner No. 1), which follows a deported Mexican immigrant’s rise to power after his political commentary turns him from TV star to the President of Mexico.  His actions come at great cost when his closest confidantes have him imprisoned and he becomes the character referenced in the title.  The series marks Telemundo’s first political thriller and has Homeland executive producer Avi Nir at the helm.

Also among the new hour-long series is Betty in NY, a modern retelling of the popular comedy Betty La Fea (Ugly Betty) that follows a young Beatriz Lozano as she travels to New York City in search of her dream job.  After being declined by several companies, she takes a job for which she is overqualified: secretary to the president of V&M Fashions.  Personally, I was a huge fan of Ugly Betty starring America Ferrera, so I’m interested to see where Telemundo takes this modernized version, with the massive role that social media platforms and social media influencers now play in the fashion industry.

Silberwasser also announced Falco and El Recluso, two new “premium series.”  Series in this category have fewer episodes than “super series” but are typically action-packed stories of revenge, intrigue and passion.  Falco is a new police drama about an officer who is shot in the head and falls into a coma, only to awaken 23 years later, only to learn that he has missed his daughter’s young life and his wife has remarried.  He then sets out to learn who wanted him dead over 20 years ago.  El Recluso (The Inmate) follows a former government operative played by Ignacio Serricchio (Lost in Space) who is approached by a powerful U.S. judge to rescue his daughter from a maximum security prison in Mexico.

Reality shows and cooking competitions have been a huge staple in American television for decades, and with the success of MasterChef Latino, a second series is coming soon to feature flavors from across Latin America and around the world.  Singing competition series are making their way to Telemundo, with the announcement of La Voz (The Voice) and its first judge, Luis Fonsi, better known recently for his mega hit with Daddy Yankee, “Despacito.”

Exalton is a new competition series in which twenty celebrities and athletes will divide into two teams and compete in grueling physical challenges, sports and extreme circuits.  The competitors must also put up with each other as they will be living together throughout the competition as their numbers dwindle.  The winner goes home with $200,000.

Among the specials coming to Telemundo in the season ahead are the prestigious Billboard Latin Music Awards, the Latin American Music Awards and Telemundo’s own Premios Tu Mundo.

It was also announced that Hulu and NBCUniversal will be extending their current deal to provide over 3000+ hours of programming, making Telemundo the largest provider of Spanish-language content with on streaming and on demand platforms.  Programming coming to Hulu includes El Señor de los Cielos, Señora Acero, Alguien Te Mira, La Casa de al Lado, Perro Amor, The Riveras and I Love Jenni.

Telemundo and E! will be partnering to create The Mix, a weekly total-market entertainment series whose focus will range from culturally relevant topics and entertainment news stories to celebrity interviews and fashion, style and beauty segments.