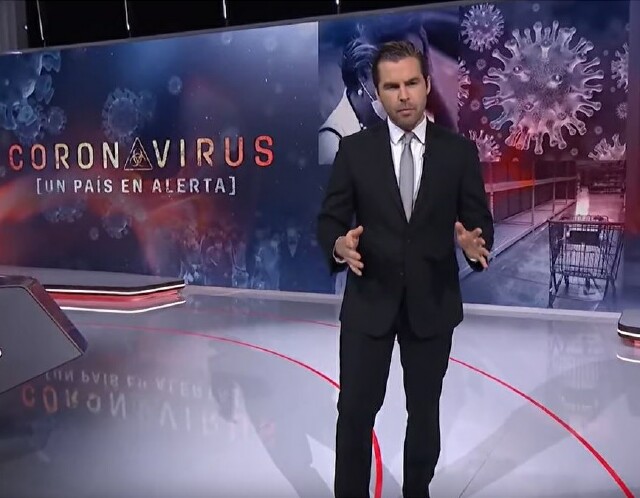 What Millennials and Gen-Zers first dismissed as “just another flu,” comparing it to past diseases like H1-N1 and Mad Cow Disease, has quickly became more serious than we ever anticipated.  In its network-wide initiative to keep viewers informed on the spread of COVID-19, Noticias Telemundo this week broadcast an hour-long special, Coronavirus: Emergencia Mundial (Coronavirus: Global Emergency).  Hosted by Noticias Telemundo anchors Jose Diaz-Balart and Julio Vaqueiro (pictured at top), along with senior correspondent Vanessa Hauc, the broadcast featured wide coverage of the outbreak from around the country, including a panel with medical experts providing insight on what we can do to prevent further spreading of the virus.  In addition to this special, Telemundo has launched a new newscast, Coronavirus: Un País en Alerta (Coronavirus: A Nation on Alert ), which is telecast nightly at 11:35 p.m.  It is hosted by Vaquiero.

Coronavirus: Emergencia Mundial addressed concerns, symptoms and the best actions to take when feeling sick and what to do if exposed.  It relayed information that English-speaking Americans may hear constantly, but Spanish audiences may be missing out on if they don’t have bilingual family members. 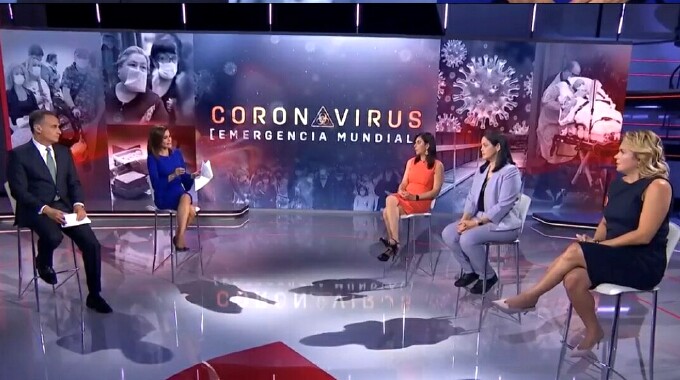 “We want to tell you something -- we are going to come out of this crisis,” Diaz-Balart assured audiences in Spanish from Telemundo Center in Miami, Florida.  “Latinos will come out ahead.  All of us are together and we will be there with you.”  Reporting from San Francisco, field correspondent Francisco Fajardo shared that despite obligatory quarantines, thousands are still flocking to grocery stores, waiting up to two hours for food and essential supplies.  Field correspondent Javier Vega reported live from a nearly deserted Times Square.

Miami mayor Francis Suarez, who recently tested positive for COVID-19 and is now quarantined in his home, gave an interview with the Noticias Telemundo team, stating that his symptoms were very mild and that he is recovering smoothly.  He had only tested at the request of the Department of Health after the press minister of Brazil, with whom he had recently met, tested positive as well.  The mayor shared that he immediately began a quarantine away from his family to prevent them from being infected.  Suarez, only 40 years old, said he has not felt any severe symptoms and that he hopes to soon test negative in two areas that would allow him to end his time in quarantine and reunite with his loved ones.  That process, he explained, is a very thorough one and will take upwards of four days to another week.

“Dr. Marty, if we do not feel symptoms, could we still potentially infect others?” asked Diaz-Balart.

“Yes,” she bluntly replied.  “The time between when a virus enters a body and it takes effect is anywhere between four and four-and-a-half days.”

Dr. Abbo chimed in, agreeing that those who are asymptomatic (without symptoms) could still be carrying the virus, thus putting others at risk.

Dr. Marty also said that despite a full recovery from the virus, one could still be infectious for up to two weeks.

Hauc asked the panel what one should do if a family member is infected.  Would their entire household have to be quarantined?  “It’s currently advised that the family keep their distance from the infected family member and that the entire household avoid leaving the house to reduce the risk of infecting others,” Dr. Abbo replied.  “We call it ‘Mitigation and Containment.’  We want to contain the disease as much as possible and prevent further complications.”

Dr. Marty went on to say that the most effective way of preventing further spread of the disease is to conduct the proper test thoroughly, of which there are three total for different parts of the body, one through the nose, one through the mouth/throat and another that is done more thoroughly.  She also urged that all tests should be conducted on everyone who has had contact with an infected person, though the initial test could come up negative because the virus is still incubating, so a later test could come up positive.

What was surprising to me was that this special did not mention a particularly alarming situation in Scranton, PA, in which an undocumented person was arrested by ICE upon seeking medical attention at a hospital.  This response creates a massive risk for all of us, because other undocumented people may now avoid seeking any medical attention out of fear of being arrested, putting their own family members and countless others in danger.  I do hope Telemundo and others devote time to this in the near future, though understandably they wanted to focus this first special on preventative measures for those who may not know what to do during this difficult time.

Coronavirus: Emergencia Mundial, as well as additional coverage, is available at NoticiasTelemundo.com and on the program’s YouTube channel and Facebook page.  Noticias Telemundo is telecast weeknights at 6:30 p.m.