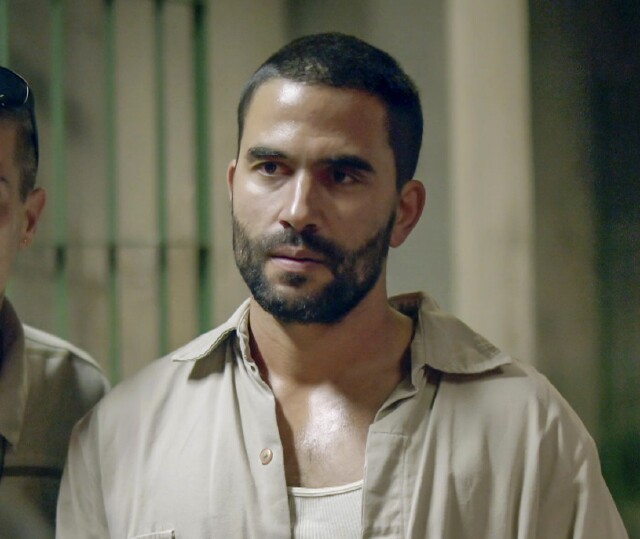 Earlier this year, Telemundo and NBCUniversal announced the launch of Telemundo International Studios, a new production unit that would shift its focus to Telemundo’s original, hour-long scripted Premium Series.  The new studio’s lineup of programming kicked off on September 25 with the 13-chapter prison thriller El Recluso (The Inmate), an adaptation of Argentine series El Marginal. The latter was created by Sebastian Ortega and Mariano Ardanaz, who serve as executive producers of El Recluso.  Ardanaz also directed the first batch of episodes, with cinematography by Jaime Reynoso (Netflix’s Bloodline, USA’s Shooter).

El Recluso follows former Marine Lázaro Mendoza, who is called upon by John Morris, a prominent United States judge, to rescue his daughter Linda when she is kidnapped and held for ransom by a Mexican gang.  Linda is being held captve at a maximum security prison known as La Rotonda (The Roundabout), so in order to rescue her Mendoza assumes a new identity, Dante Pardo, and is "framed" for murder and sent to the same facility).  In a prison full of gang members, mass murderers and psychopaths, Mendoza is quickly "initiated" by the facility’s violent inmates and viciously beaten to within an inch of life.  While in solitary confinement, he gains his first bit of evidence that Morris’ daughter is still alive.  Mendoza periodically meets with his "lawyer," who is really his brother who also works for Morris, in order to maintain contact and give updates on his progress of finding Linda.

Throughout the series, we catch brief glimpses into Mendoza’s past as he reminisces about his wife and son in a joyous and loving life, at least at the start.  Things take a turn for the worse when his wife is struck with cancer, and despite Morris’ best efforts to provide the services of a specialist, the cancer spreads beyond control and Mendoza's wife has little time left.  Two episodes in it is unclear what has happened to his wife but the assumption is that Mendoza wants to see this mission through to the end so he can return to his family.

A fast-paced thriller, El Recluso feels like a cross between Prison Break and Taken amidst the prison politics and hierarchy within the facility’s population and a detail-oriented lead hero that has a particular set of skills.  Not only is El Recluso an incredibly well-produced and executed drama, but it is a commentary on the frighteningly real corruption that takes place not only within the administration of prisons, but that of foreign police forces and governments.

Mendoza is played by Argentine-American actor Ignacio Serricchio (General Hospital, Lost in Space) who takes on the role of hardened and former Marine in a seemingly effortless manner.  His vulnerability is moving and at times heartbreaking, but he never lets his enemies see even a glimmer of weakness, and he always maintains the tough exterior his mission demands.  Serricchio (pictured at top) gives a performance of pulse-pounding strength one minute and palpable pain the next.  He is outstanding in the role.

Ana Claudia Talancon portrays Frida Villareal, a social worker at La Rotonda who seems to be the only person in the entire facility looking after its inmates.  Frida gives the inmates a sense of hope, especially those she believes still have light in them -- a quality she sees in Mendoza.  The supporting cast also features Luis Felipe Tolivar as manipulative criminal and fellow inmate Mariano Tavares, David Chocarro as prisoner Santito, Guy Ecker as Judge John Morris and Isabella Castillo as his daughter Linda.

The series' direction and cinematography is comparable to that of major network series like Homeland and House of Cards, which are large in scale and size but manage to not lose any sense of story, character or depth.

Though the crime drama genre is nothing new for Telemundo, or the majority of television programming for that matter, what is clearly an upgrade is the overall production value and focus on clear, concise storytelling.  Many modern telenovelas are on five nights a week for months at a time, and given the mounting competition out there it is sometimes hard to keep up with them, especially for someone who watches both American and Spanish-speaking networks.  I’m sure Telemundo knows of the ever-shrinking attention spans of Millennial and Gen-Z audiences and that the average telenovela or "Super Series" (those with 100-plus episode seasons) may not fair well with them unless they’re really hooked.

That shouldn't be the case here.  Telemundo has a sure-fire home-run with El Recluso.  In a world of media with endless representations of toxic masculinity, it's refreshing and inspiring to see a lead hero with such strength and bravado who also shows vulnerability, emotional depth and, above all, heart.

El Recluso is telecast Monday through Friday at 10 p.m. on Telemundo.